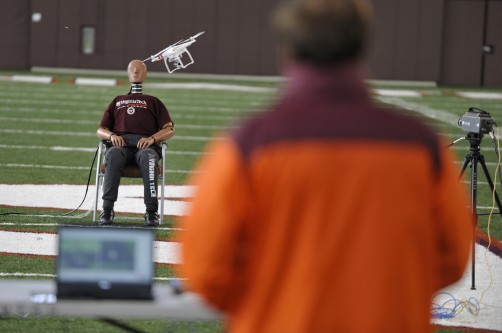 Researchers collect drone impact data at an athletics facility on Virginia Tech’s Blacksburg campus under the direction of the Virginia Tech Mid-Atlantic Aviation Partnership and the Institute for Critical Technology and Applied Science.

Many of the most promising applications for these aircraft — including package delivery, public safety, and traffic management — entail flights over people and raise the possibility, however unlikely, of an impact between the aircraft and a human.

So before unmanned aircraft systems — also known as UAS or drones — can be utilized efficiently by the many industries eager to employ them, policymakers need to understand what injuries these aircraft could potentially cause and what design features, operational limitations, and regulations could help prevent them.

Without robust experimental data on these topics, Federal Aviation Administration (FAA) regulations currently prohibit UAS operations over people. (Operators can apply for a waiver, but the FAA has granted only three, all extremely limited in scope.)

The research, published in the Annals of Biomedical Engineering, assessed head and neck injury risk from three small commercially available aircraft in a variety of impact scenarios. It represents a critical step toward developing UAS safety standards that can minimize the risk of catastrophic or fatal injury from operations over people.

The injury biomechanics team is led by Steven Rowson, an assistant professor of biomedical engineering and mechanics in the College of Engineering, and Stefan Duma, the Harry Wyatt Professor of Engineering and interim director of the Institute for Critical Technology and Applied Science. The group’s wide-ranging experience evaluating injury risk includes extensive work in the automotive and sports industries — both areas in which evidence-based safety standards have been effective at reducing catastrophic and fatal injuries.

The team used three commercially available aircraft, with masses ranging from 1.2 kilograms to 11 kilograms; the aircraft impacted a test dummy whose head and neck contained sensors to measure acceleration and force.

The forces produced by these impacts were evaluated relative to standard benchmarks for forces likely to cause potentially severe or life-threatening injuries — skull fractures, for example.

In general, the injury risk increased with aircraft mass. For example, in drop tests with the smallest drone, the risk of severe neck injury was less than 10 percent; for the largest aircraft, the median risk rose to 70 percent.

These results suggest that a subset of small drones may already be safe to operate over people. Other aircraft, however, present significant injury risk, even those well within mass and speed limits outlined in the FAA’s Part 107 guidelines for commercial operations by small UAS.

The data also shows that despite greater impact speeds in the live flight tests, the drop tests — which facilitated more direct contact between the aircraft center of mass and the dummy’s head — tended to result in more severe hits. That reflects a common thread in the numbers: The nature of the impact had a significant influence on the resulting injury probability.

During impacts in which the aircraft was deflected away from the body — by a protruding rotor arm, for example — the force and resulting injury risk were reduced. Aircraft features specifically designed to redirect its center of mass in the event of an impact could make severe injuries less likely.

The data showed that injury risk was also reduced when the aircraft deformed upon impact or when pieces broke off. Those deformations and fractures absorb some of the energy of the crash and offer another route for risk mitigation.

“If you reduce the energy that’s able to be transferred to be head, you reduce the injury risk,” said Eamon Campolettano, a doctoral student from Hicksville, New York, and the paper’s first author. “The overarching goal for manufacturers should be to limit energy transfer.”

The fact that some of the trials in the study yielded risk values greater than 50 percent highlights the potential for UAS-human impacts to lead to severe injuries. The significant variation in the data points to the need for comprehensive testing, especially considering the range of shapes, sizes, and materials in the commercial UAS market.

“What happens when the arm strikes first, or the center of mass?” asked Campolettano. “What we set out to do with this study was to explore some of the many different ways drones and people can interact, and then use that baseline to choose different impact orientations for future studies.”

The team is using these initial results to guide the development of a broader set of controlled experiments in a laboratory environment, which will represent a necessary foundation for future regulations on UAS operations over people.

“There’s a tremendous demand for more research in this area,” said Mark Blanks, the director of the Virginia Tech Mid-Atlantic Aviation Partnership. “The first step was to establish a baseline for how to perform these tests. Now we’re doing a lot of work with individual companies, looking at specific airframes and potential mitigations.”

“The big question right now is, what is the acceptable level of safety?” said Blanks, who also chairs an industry standards subcommittee developing recommendations for safe operations over people. “How much proof does the FAA need before they say, ‘Yes, that’s okay’? Once those standards are in place, we’re going to see huge expansion in the industry.”

HD video and photos of the research are available for download via Dropbox.