30-Aug-2018 11:05 AM EDT, by Michigan Technological University more news from this source 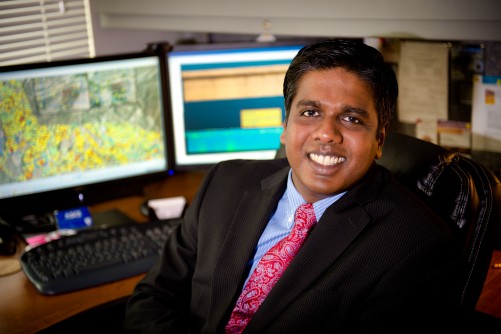 94 inches of rain in 87 days. The flooding and landslides in Kerala, India have claimed the lives of 445 people so far and more data is needed to support current recovery efforts and future engineering projects.

A team led by Thomas Oommen, associate professor of geological engineering at Michigan Technological University, and Richard Coffman, associate professor of civil engineering at the University of Arkansas, will visit the flood and landslide affected areas from September 3 to 10. Their research is funded by the GEER Association, Geotechnical Extreme Events Reconnaissance, a program sponsored by the National Science Foundation (NSF).

“It is heartbreaking that Kerala had to go through this disaster,” Oommen says, “but it is now an opportunity to turn this disaster into knowledge so that we are better prepared for such events in the future.”

Oommen, who is originally from Kerala, says the team will focus on understanding how some of the critical infrastructure including roads, bridges, and dams performed during the flood event. The team will also document the landslides and debris flows and the impact of the disaster on foundation, coastal structures as well as slopes and embankments. The team collects data using a variety of tools. The team will collaborate with local engineering practitioners and scientists. Documenting this extreme event and making the key lessons learned publicly available contribute significantly to advancing research and practice in engineering.

Oommen, who has studied global geohazards for more than a decade, is the co-author of the Landslide Atlas of Kerala with his colleague K.S. Sajinkumar, an assistant professor of geology at the University of Kerala who will be hosting the GEER team during their September visit.