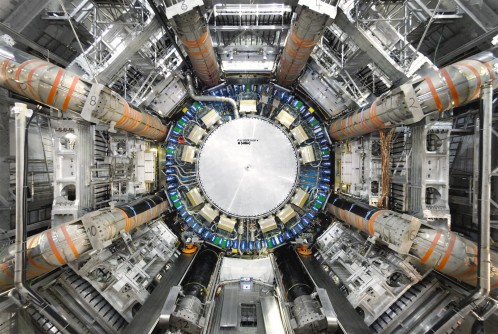 The ATLAS detector at the Large Hadron Collider housed at CERN near Geneva. ATLAS is a particle physics experiment at the Large Hadron Collider at CERN. Starting in late 2009, the ATLAS detector will search for new discoveries in the head-on collisions of protons of extraordinarily high energy. ATLAS will learn about the basic forces that have shaped our Universe since the beginning of time and that will determine its fate.

Newswise — Particle beams are once again zooming around the world’s most powerful particle accelerator, the Large Hadron Collider (LHC), at the CERN laboratory near Geneva, Switzerland, where a team of University of Massachusetts Amherst physicists run experiments to collect data on fundamental atomic particles. The work could reveal new states of matter and unveil the secrets of dark matter.

A clockwise circulating beam was established in the LHC’s 17-mile-diameter ring on Nov. 20, ending more than a year of repairs to the huge underground laboratory. It is now ready to begin creating high-energy particle collisions that may yield insights into the nature of the physical universe, scientists say. The accelerator is a tool used to study extremely small structures within an atom’s nucleus, as well as interactions between them.

UMass Amherst physicist Stephane Willocq and colleagues in the campus’ High Energy Physics group are involved in the ATLAS experiment, one of the two largest experiments ongoing at the LHC with more than 2,000 physicists collaborating. ATLAS stands for A Toroidal LHC ApparatuS.

Willocq says with the LHC back on line, the ATLAS detector can now begin searching for new discoveries in the head-on collisions of protons of extraordinarily high energy. “ATLAS will learn about the basic forces that have shaped our Universe since the beginning of time; forces which will determine its fate. Among the possible unknowns are the origin of mass, extra dimensions of space, unification of fundamental forces, and evidence for dark matter candidates in the Universe.”

He and faculty colleagues Benjamin Brau and Carlo Dallapiccola, with three postdoctoral research associates, five graduate students and three undergraduates, are developing software for the Muon Spectrometer, a detector that identifies and measures muon trajectories in a magnetic field to determine their momenta with high precision. Muons are fundamental particles like electrons but are 200 times heavier. As decay products of collisions, they are expected to lead to discovering new states of matter such as the Higgs boson, or dark matter.

As Willocq further explains, “We are leading several areas including detector performance. Our scientists are preparing searches for physics beyond the standard model using muon signatures. We’re particularly interested in understanding the impact and improving the performance of muon reconstruction at high energies. Initial work also focused on commissioning the detector and testing the performance of the reconstruction algorithms for physics analysis.”

The LHC circulated its first beams in September 2008, but suffered a serious malfunction nine days later. A failure in an electrical connection led to serious damage, and CERN has spent more than a year repairing and consolidating the machine to ensure that such an incident cannot happen again.

In congratulating the scientists and engineers who got the LHC back up and running, Dennis Kovar, associate director of science in the United States Department of Energy’s (DOE) high energy physics section, says “the LHC is a machine unprecedented in size, in complexity, and in the scope of the international collaboration that has built it over the last 15 years.”

The DOE invested $200 million in the construction of the LHC accelerator. About 150 scientists, engineers and technicians from three DOE national laboratories—Brookhaven Lab, Fermilab and Berkeley Lab—built critical accelerator components. They are joined by colleagues from DOE’s SLAC National Accelerator Laboratory and the University of Texas at Austin in ongoing LHC accelerator R&D.

Over the next few months, scientists will create collisions between two beams of protons at the LHC. These first LHC collisions will take place at relatively low energy. Operators will then raise the beam energy, aiming for collisions at world-record high energy collision levels in early 2010. When these are achieved, the hunt for discoveries at the LHC will begin.

“It’s great to see beam circulating in the LHC again” said CERN’s Director for Accelerators Steve Myers. “We’ve still got some way to go before physics can begin, but with this milestone we’re well on the way.” Willocq adds, “We are excited by the rapid turn-on of the LHC this year and the prospects for future discoveries.”

An estimated 10,000 people from 60 countries have helped design and build the LHC accelerator and its four massive particle detectors, including more than 1,700 scientists, engineers, students and technicians from 97 U.S. universities and laboratories in 32 states and Puerto Rico supported by the DOE Office of Science and the National Science Foundation.