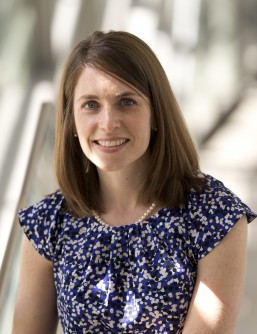 Newswise — AMHERST, Mass. – Reliable data are lacking on whether phthalates, the plasticizing and solvent chemicals found in such products as cosmetics, shampoo, flooring and medical tubing, affect human breast cancer risk. Now epidemiologist Katherine Reeves at the University of Massachusetts Amherst is leading the largest study to date investigating a possible relationship with a three-year, $1.5 million grant from the National Institute of Environmental Health Sciences.

Reeves and colleagues will study phthalate metabolites, which are products found in urine samples after the chemicals have passed through the body. They are measurable in nearly 100 percent of the United States population though levels vary widely, and have been reported in human breast milk, the researchers note. However, only a handful of small studies have looked at whether phthalates affect human breast cancer risk and none have measured phthalate metabolites before a cancer diagnosis.

To investigate a possible association between exposure and risk the study team, which includes UMass Amherst biologist Thomas Zoeller, an expert in endocrine-disrupting chemicals, plus epidemiologist Sue Hankinson and biostatistician Carol Bigelow, will analyze levels of 11 phthalate metabolites in urine samples from 500 women diagnosed with invasive breast cancer after Year 3 of follow-up and in 1,000 healthy matched controls in a prospective study nested within the Women’s Health Initiative.

Reeves says, “This study, where the samples were given many years before any sign of disease appeared, will give us much stronger evidence in terms of causality than studies using another design.” Also, because the researchers will have three stored urine samples, from baseline, Year 1 and Year 3 for analysis, they will be able to address variation in phthalate exposure.

“Taking repeated looks gives us an idea of what a woman’s typical or average exposure is and that’s another real advantage of this study,” she adds.

Further, by measuring excreted products rather than phthalates themselves, the researchers say they can be confident that they are measuring personal exposure rather than laboratory or other contamination. Another strength of the investigation is that it will evaluate 11 different chemicals. “It’s important not to just look at one phthalate and think that it tells the whole story, but to look at the whole panel,” the epidemiologist points out.

Many people assume that any kind of environmental exposure to phthalates is bad even if the scientific evidence is unclear, Reeves points out, “but with this study we hope to provide not more uncertainty, but instead either reassurance or solid evidence of cause for concern. It is well designed and large enough so no matter what answer we find we can have confidence in the result.”

The study will also evaluate whether associations between phthalate metabolite levels and breast cancer vary by disease characteristics such as hormone receptor status and personal factors including age, postmenopausal hormone therapy use and body mass index.