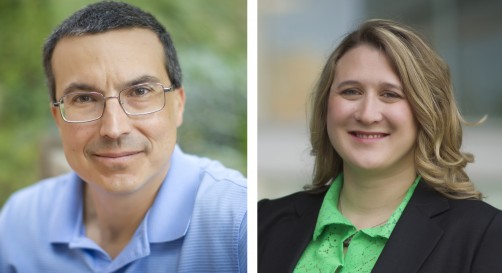 Newswise — Researchers with The Cancer Genome Atlas (TCGA) Research Network have completed the largest, most diverse tumor genetic analysis ever conducted, revealing a new approach to classifying cancers. The work, led by researchers at the UNC Lineberger Comprehensive Cancer Center at the University of North Carolina at Chapel Hill and other TCGA sites, not only revamps traditional ideas of how cancers are diagnosed and treated, but could also have a profound impact on the future landscape of drug development.

“We found that one in 10 cancers analyzed in this study would be classified differently using this new approach,” said Chuck Perou, Ph.D., professor of genetics and pathology, UNC Lineberger member and senior author of the paper, which appears online Aug. 7 in Cell. “That means that 10 percent of the patients might be better off getting a different therapy – that’s huge.”

Since 2006, much of the research has identified cancer as not a single disease, but many types and subtypes and has defined these disease types based on the tissue – breast, lung, colon, etc. – in which it originated. In this scenario, treatments were tailored to which tissue was affected, but questions have always existed because some treatments work, and fail for others, even when a single tissue type is tested.

In their work, TCGA researchers analyzed more than 3,500 tumors across 12 different tissue types to see how they compared to one another -- the largest data set of tumor genomics ever assembled, explained Katherine Hoadley, Ph.D., research assistant professor in genetics and lead author. They found that cancers are more likely to be genetically similar based on the type of cell in which the cancer originated, compared to the type of tissue in which it originated.

“In some cases, the cells in the tissue from which the tumor originates are the same,” said Hoadley. “But in other cases, the tissue in which the cancer originates is made up of multiple types of cells that can each give rise to tumors. Understanding the cell in which the cancer originates appears to be very important in determining the subtype of a tumor and, in turn, how that tumor behaves and how it should be treated.” Perou and Hoadley explain that the new approach may also shift how cancer drugs are developed, focusing more on the development of drugs targeting larger groups of cancers with genomic similarities, as opposed to a single tumor type as they are currently developed.

One striking example of the genetic differences within a single tissue type is breast cancer. The breast, a highly complex organ with multiple types of cells, gives rise to multiple types of breast cancer; luminal A, luminal B, HER2-enriched and basal-like, which was previously known. In this analysis, the basal-like breast cancers looked more like ovarian cancer and cancers of a squamous-cell type origin, a type of cell that composes the lower-layer of a tissue, rather than other cancers that arise in the breast.

“This latest research further solidifies that basal-like breast cancer is an entirely unique disease and is completely distinct from other types of breast cancer,” said Perou.

In addition, bladder cancers were also quite diverse and might represent at least three different disease types that also showed differences in patient survival.

As part of the Alliance for Clinical Trials in Oncology, a national network of researchers conducting clinical trials, UNC researchers are already testing the effectiveness of carboplatin – a common treatment for ovarian cancer – on top of standard of care chemotherapy for triple-negative breast cancer (TNBC) patients, of which 80 percent are the basal-like subtype. The results of this study (called CALGB40603) were just published on Aug. 6 in the Journal of Clinical Oncology and showed a benefit of carboplatin in TNBC patients. This new clinical trial result suggests that there may be great value in comparing clinical results across tumor types for which this study highlights as having common genomic similarities.

As participants in TCGA, UNC Lineberger scientists have been involved in multiple individual tissue type studies including most recently an analysis of a comprehensive genomic profile of lung adenocarcinoma. Perou’s seminal work in 2000 led to the first discovery of breast cancer as not one, but in fact, four distinct subtypes of disease. These most recent findings should continue to lay the groundwork for what could be the next generation of cancer diagnostics.

TCGA is jointly funded and managed by the National Cancer Institute (NCI) and the National Human Genome Research Institute (NHGRI), both part of the National Institutes of Health. TCGA-generated data are freely available in advance of publication at the TCGA Data Portal, http://tcga-data.nci.nih.gov/tcga, and CGHub, https://cghub.ucsc.edu.The TCGA Research Network includes more than 150 researchers at dozens of institutions across the nation. A list of participants is available at http://cancergenome.nih.gov/abouttcga/overview. More details about TCGA, including Quick Facts, Q&A, graphics, glossary, a brief guide to genomics and a media library of images can be found at http://cancergenome.nih.gov.

One of only 41 NCI-designated comprehensive cancer centers, the University of North Carolina Lineberger Comprehensive Cancer Center brings together some of the most exceptional physicians and scientists in the country to investigate and improve the prevention, early detection and treatment of cancer. With research that spans the spectrum from the laboratory to the bedside to the community, UNC Lineberger faculty work to understand the causes of cancer at the genetic and environmental levels, to conduct groundbreaking laboratory research, and to translate findings into pioneering and innovative clinical trials. For more information, please visit www.unclineberger.org.