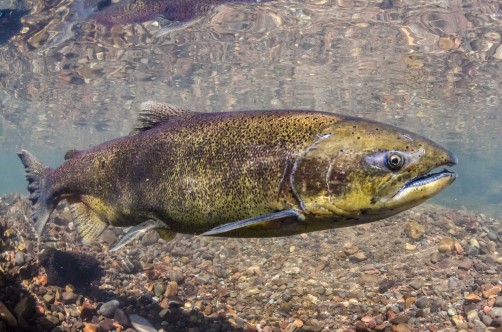 A Chinook salmon pictured in Oregon’s McKenzie River.This adult fish is smaller than its predecessors. 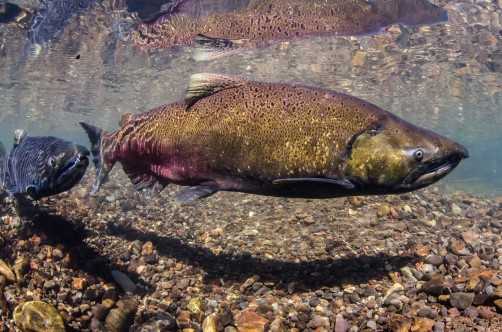 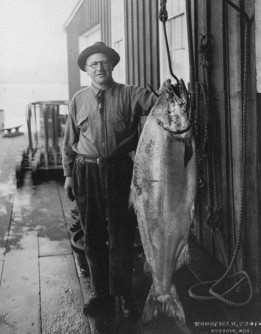 A historically large Chinook salmon from the Columbia River.

Newswise — The largest and oldest Chinook salmon — fish also known as "kings" and prized for their exceptional size — have mostly disappeared along the West Coast.

That's the main finding of a new University of Washington-led study published Feb. 27 in the journal Fish and Fisheries. The researchers analyzed nearly 40 years of data from hatchery and wild Chinook populations from California to Alaska, looking broadly at patterns that emerged over the course of four decades and across thousands of miles of coastline. In general, Chinook salmon populations from Alaska showed the biggest reductions in age and size, with Washington salmon a close second.

"Chinook are known for being the largest Pacific salmon and they are highly valued because they are so large," said lead author Jan Ohlberger, a research scientist in the UW's School of Aquatic and Fishery Sciences. "The largest fish are disappearing, and that affects subsistence and recreational fisheries that target these individuals."

Chinook salmon are born in freshwater rivers and streams, then migrate to the ocean where they spend most of their lives feeding and growing to their spectacular body size. Each population's lifestyle in the ocean varies, mainly depending on where they can find food. California Chinook salmon tend to stay in the marine waters off the coast, while Oregon and Washington fish often migrate thousands of miles northward along the west coast to the Gulf of Alaska where they feed. Western Alaska populations tend to travel to the Bering Sea.

After one to five years in the ocean, the fish return to their home streams, where they spawn and then die.

Despite these differences in life history, most populations analyzed saw a clear reduction in the average size of the returning fish over the last four decades — up to 10 percent shorter in length, in the most extreme cases.

These broad similarities point to a cause that transcends regional fishing practices, ecosystems, or animal behaviors, the authors said.

"This suggests that there is something about the larger ocean environment that is driving these patterns," Ohlberger said. "I think fishing is part of the story, but it's definitely not sufficient to explain all of the patterns we see. Many populations are exploited at lower rates than they were 20 to 30 years ago."

It used to be common to find Chinook salmon 40 inches or more in length, particularly in the Columbia River or Alaska's Kenai Peninsula and Copper River regions. The reductions in size could have a long-term impact on the abundance of Chinook salmon, because smaller females carry fewer eggs, so over time the number of fish that hatch and survive to adulthood may decrease.

There are likely many reasons for the changes in size and age, and the researchers say there is no "smoking gun." Their analysis, however, points to fishing pressure and marine mammal predation as two of the bigger drivers.

Commercial and sport fishing have for years targeted larger Chinook. But fishing pressure has relaxed in the last 30 years due to regulations to promote sustainable fishing rates, while the reductions in Chinook size have been most rapid over the past 15 years. Resident killer whales, which are known Chinook salmon specialists, as well as other marine mammals that feed on salmon are probably contributing to the overall changes, the researchers found.

"We know that resident killer whales have a very strong preference for eating the largest fish, and this selectivity is far greater than fisheries ever were," said senior author Daniel Schindler, a UW professor of aquatic and fishery sciences.

While southern resident killer whales that inhabit Puget Sound are in apparent decline, populations of northern resident killer whales, and those that reside in the Gulf of Alaska and along the Aleutian Islands, appear to be growing at extremely fast rates. The paper's authors propose that these burgeoning northern populations are possibly a critical, but poorly understood, cause of the observed declines in Chinook salmon sizes.

"When you have predators and prey interacting in a real ecosystem, everything can't flourish all the time," Schindler said. "These observations challenge our thinking about what we expect the structure and composition of our ecosystems to be."

Co-authors are Eric Ward of NOAA's Northwest Fisheries Science Center and Bert Lewis of the Alaska Department of Fish and Game.

This study was funded by the Pacific States Marine Fisheries Commission. 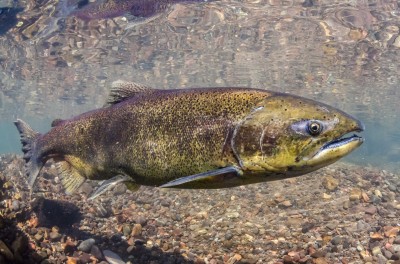 Caption: A Chinook salmon pictured in Oregon’s McKenzie River.This adult fish is smaller than its predecessors. 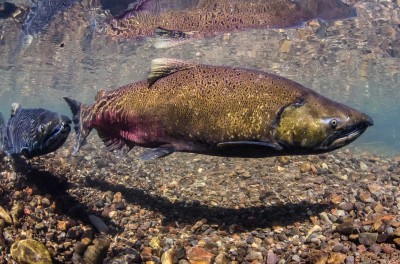 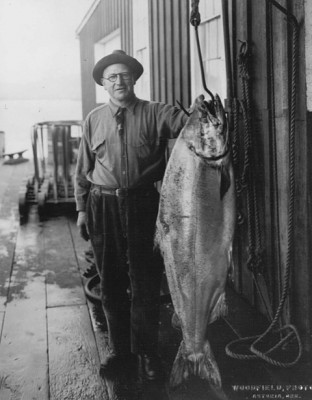 Caption: A historically large Chinook salmon from the Columbia River.