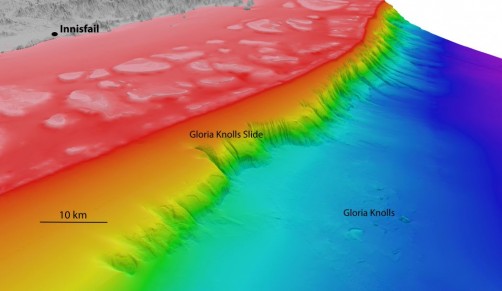 North-westerly view of the Gloria Knolls Slide and Gloria Knolls off Innisfail. Depths are coloured red (shallow) to blue (deep), over a depth range of about 1700 metres.

Newswise — James Cook University scientists have helped discover the remnants of a massive undersea landslide on the Great Barrier Reef, approximately 30 times the volume of Uluru.

JCU's Dr Robin Beaman said the remains of the slip, known as the Gloria Knolls Slide, were discovered 75 kilometres off the north Queensland coast near the town of Innisfail while the scientists were working from the Marine National Facility's blue-water research ship Southern Surveyor.

"This is all that remains after a massive collapse of sediment of about 32 cubic kilometres' volume more than 300,000 years ago," he said.

Dr Beaman said a debris field of large blocks, or knolls, and numerous smaller blocks, lies scattered over 30 kilometres from the main landslide remains, into the Queensland Trough, to a depth of 1350 metres.

"We were amazed to discover this cluster of knolls while 3D multibeam mapping the deep GBR seafloor. In an area of the Queensland Trough that was supposed to be relatively flat were eight knolls, appearing like hills with some over 100 m high and 3 km long."

Associate Professor Jody Webster from the University of Sydney likened the research to a detective story, first finding the knolls, then using later mapping to reveal the landslide source of the knolls.

A sediment sample from a knoll at a depth of 1170 metres identified a remarkable cold-water coral community of both living and fossil cold-water coral species, gorgonian sea whips, bamboo corals, molluscs and stalked barnacles.

"The oldest fossil corals recovered off the top of the knoll was 302 thousand years," says Dr Angel Puga-Bernabéu at the University of Granada and lead author on the study, "which means the landslide event that caused these knolls must be older".

Modelling the potential tsunami for a sudden 'mass failure' on this scale yields a three-dimensional tsunami wave elevation of about 27 metres. However, the wave would likely be dampened significantly by the presence of any coral reefs.

Considerably more seabed mapping and sampling is needed to fully assess the tsunami hazard to the Queensland coast posed by these types of underwater landslides.

The scientists said one-third of the Great Barrier Reef lies beyond the seaward edge of the shallower reefs, and the discovery of this prominent undersea landslide and its vast debris field in the deep Great Barrier Reef reveals a far more complex landscape than previously known.