Survival may influence their ability to transmit dangerous diseases

1-Apr-2015 9:05 AM EDT, by University of Florida Institute of Food and Agricultural Sciences
favorite_border 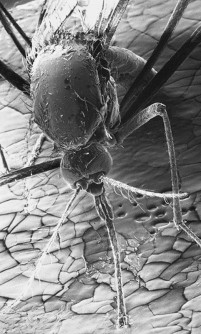 Newswise — GAINESVILLE, Fla. --- With spring showers come Floridians’ least-favorite companion – the mosquito – and a team of researchers with the University of Florida’s Institute of Food and Agricultural Sciences has found in a recent study that larval competition between the Yellow Fever Mosquito and Asian Tiger Mosquito impacts adult survival, which may influence their ability to transmit dangerous diseases. “We think of mosquitoes as winged pests. However, we also know that these winged pests are not only a nuisance, they can also transmit very nasty pathogens that cause disease in humans and animals,” said Barry Alto, an assistant professor at UF’s Florida Medical Entomology Laboratory, who led the study published this month in the Journal of Medical Entomology. “Older mosquitoes are potentially more dangerous because they have had a greater chance of becoming infected with pathogens, like dengue or chikungunya viruses, and so may transmit that pathogen to people.” The Yellow Fever and Asian Tiger mosquitoes are invasive species and the main transmitters of chikungunya and dengue. These mosquitoes have larval stages in water and often experience crowded conditions and limited nutrients that result in competition among larvae, which may continue to influence their biology as adults. Competition includes eating more food than their counterparts, which can result in smaller adults.

Alto and his team studied competition between these invasive mosquitoes at the larval stage, manipulating how many of each species was in a container and then tracking the daily survival rates of the adults. They discovered that the competitive interactions between the two species in the larval stage shaped what they became as an adult, just like our experiences as children influence who we become as grown-ups.

“To our knowledge, this is the first demonstration that competition between the two mosquito species at the larval stage continues in the adult stage to influence survival,” Alto said.

Dengue viruses may infect up to 390 million people annually and is a leading cause of mosquito-borne illness, mainly in tropical and subtropical regions. Florida’s climate is favorable for mosquito production throughout most of the year for both these invasive mosquito species that transmit dengue viruses.

Originally from Africa, unprecedented outbreaks of chikungunya have occurred in the Indian Ocean region, India, Asia, Europe, and the Neotropics in the last ten years, infecting millions of people. In December 2013, chikungunya fever appeared for the first time in the Western Hemisphere. More than 2,300 imported human cases have been detected in the United States since 2013, but in July of last year, the first person to contract the disease here was reported and, since then, there have been 10 more cases of locally transmitted chikungunya - all in Florida.

“It’s important to understand the biology of mosquitoes so we can better understand factors that contribute to risk of transmission and improve methods used to reduce mosquito borne-diseases,” Alto said. A vaccine is a good way to protect against mosquito-borne disease, but currently there are no effective vaccines available for dengue and chikungunya viruses. So, to control mosquito-bornediseases we must control the mosquitoes that transmit them.”

Alto said that the Yellow Fever and Asian Tiger mosquitoes are difficult to control. Larvicides can be effective, especially when combined with other pest management approaches, such as source reduction. That includes removing mosquito-breeding habitats of standing water on your property, such as old tires, dog dishes, and various containers.

“Humans have inadvertently created many types of artificial container habitats that these invasive mosquitoes exploit for breeding,” Alto added.

Others on the study are UF research technicians David J. Bettinardi and Sara Ortiz .