Patches coated with nanoparticles from candle soot found to generate ultrasonic waves that can be used to monitor the structural integrity of buildings. 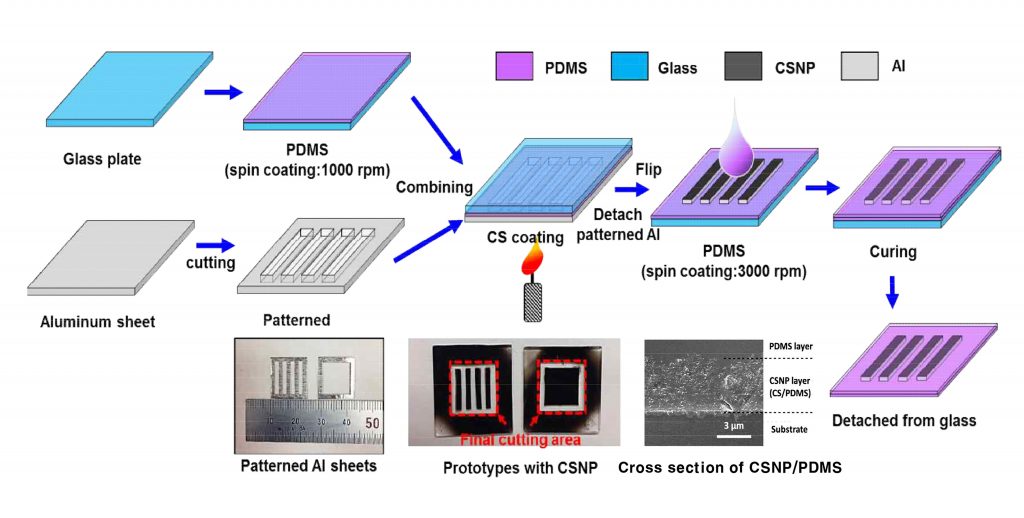 Newswise — WASHINGTON, D.C., September 3, 2019 -- Many industrial buildings, including nuclear power plants and chemical plants, rely on ultrasound instruments that continually monitor the structural integrity of their systems without damaging or altering their features. One new technique draws on laser technology and candle soot to generate effective ultrasonic waves for nondestructive testing and evaluation.

A team of researchers is using ultrasonic nondestructive testing (NDT) that involves amplifying the signal from a photoacoustic laser source using laser-absorbing patch made from an array of nanoparticles from candle soot and polydimethylsiloxane. They discuss their work in this week’s Applied Physics Letters, from AIP Publishing.

The approach marks one of the first NDT systems that combines elements of contact and noncontact ultrasound testing. The results of generating such ultrasonic waves with the photoacoustic patch demonstrate the promise of the broad range of noncontact applications for NDT.

“Laser-based NDT method has advantages of temperature-independent measurement and wide range of monitoring area by easily changing the position of devices,” said Taeyang Kim, an author on the paper. “This technique provides a very flexible and simple method for noncontact and remote generation of ultrasonic surface waves.”

Ultrasound waves can be made when a high-powered laser strikes a surface. The heat produced by the pulses induces a pattern of expansion and compression on the illuminated area, yielding an ultrasonic signal. The waves produced, called Lamb waves, then travel through material as an elastic wave.

The group used the candle soot nanoparticles paired with polydimethylsiloxane to absorb the laser. They turned to candle soot because it is readily available and efficient at absorbing lasers and can produce the elastic expansion needed to make the photoacoustic conversion that generates the Lamb wave.

By placing the particle in the patch in a line array, they were able to narrow the bandwidth of the waves, filtering out unwanted wave signals and increasing analytical accuracy. The researchers opted for an aluminum sensing system for the receiving transducer.

The patch increased the amplitude by more than twofold over conditions without the patch and confirmed it produced narrower bandwidth than other conditions.

Kim said the question of how the approach’s durability in an industrial setting remains, as well as how well the patches perform on curved and rough surfaces.

“New NDT systems will attract more attention to explore the optimal materials for the patch or various applications for NDT industries,” he said.

Next, the team looks to test the system in high-temperature nondestructive testing scenarios.

The article, "Narrow band photoacoustic lamb wave generation for nondestructive testing using candle soot nanoparticle patches," is authored by Taeyang Kim, Wei-Yi Chang, Howuk Kim and Xiaoning Jiang. The article will appear in Applied Physics Letters on Sept. 3, 2019 (DOI: 10.1063/1.5100292). After that date, it can be accessed at http://aip.scitation.org/doi/full/10.1063/1.5100292.