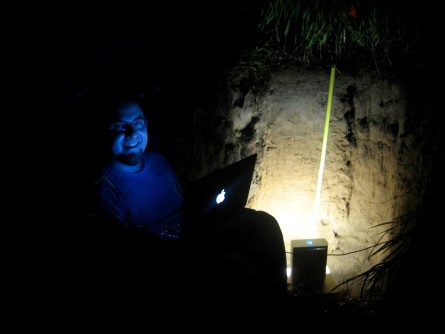 Hirmas uses his MLT scanner at night in a soil pit. Ambient daylight interferes with the detection of the pores. Cooler night temperatures also allow the scanner to stay cool and minimize the evaporation of water from the surface during the scanning procedure. 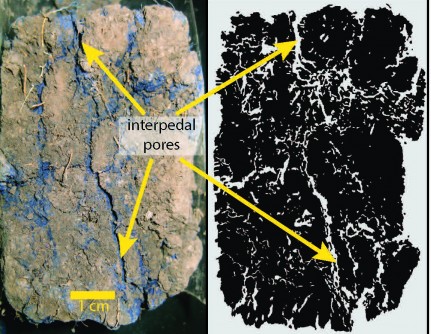 Left: Soil saturated with water and later placed in dyed water that passed through the soil. The blue color shows where most of the water flowed during the experiment. This indicated that those pores acted as preferential pathways for water movement. Right: The MLT scanner was able to reasonably differentiate between those pathways (light gray) and smaller pores (black). 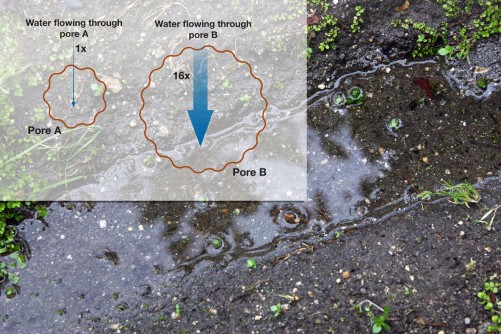 Newswise — Most of us think nothing of rainfall or where it goes, unless it leads to flooding or landslides. But soil scientists have been studying how water moves across or through soil for decades. Daniel Hirmas, a professor at University of Kansas, and his team may be taking the study of soil hydrology to some exciting new territory. Territory that may help soil scientists manage water resources better.

Why is Hirmas trying to predict water movement in soil?

“There are a number of reasons why more accurate predictions of water flow is important. Better management of water resources is one,” Hirmas says.

The flow of water in agriculture gives rise to many questions: Can we correctly predicting recharge rates of our aquifers in drought regions? Perhaps we can more efficiently use water for food production or predict how areas will react to climate change. Also, we could have better prediction of water runoff and soil erosion, deposition, and sedimentation of surface water reservoirs. Finally, we could predict how plant nutrients are transported in the soil environment.

Soil is made up of particles of sand, silt, and clay. Also within the soil is organic matter – decomposed plant litter, soil microbes, other organisms, and root systems. Air and water make up the rest.

Hirmas has been researching the ease of water movement through soil, called conductivity. This happens in larger empty spaces, macropores, that help move water through the soil.

Soil pore size is important to conductivity because of some complex geometry and scientific properties. Simply, a soil pore that is twice as large as another will conduct sixteen times the volume of water as the smaller pore in the same amount of time.

Soil scientists call this movement of water preferential flow. Hirmas explains, "Preferential in this case means that a significant portion of the water will be transported through a relatively few number of large pores. That is, a few large pores preferentially transport a majority of the water."

Hirmas has been using a special tool called a multistripe laser triangulation (MLT) scanner. The scanner was originally developed for engineering purposes. Hirmas adapted its use to study soil pores and preferential flow.

To determine if the MLT scanner could be used to predict preferential flow, Hirmas designed a study. The research group took saturated soil and allowed blue dye to flow through the sample. An easily identifiable visible pattern developed. The areas of the soil that turned blue showed larger pores. These pores allowed the dyed water to pass through – a preferential flow pattern. Next, they took the same soil sample, and scanned it using MLT. The pattern from the laser significantly matched that of the dye pattern.

The MLT offers advantages to researchers in the field of soil hydrology. “The MLT scanner is better at detecting and mapping the soil macroporosity when the soil is dry versus when it is saturated with water,” Hirmas says. Using math to account for the difference between the two states of the soil, Hirmas can make predictions about water movement.