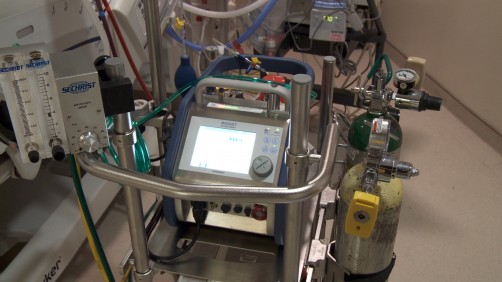 ECMO, a portable heart/lung bypass machine, in use with a flu patient

Newswise — BIRMINGHAM, Ala. – Physicians at the University of Alabama at Birmingham are employing a technology known as ECMO as a last-resort therapy for extremely severe cases of influenza. ECMO, short for extracorporeal membrane oxygenation, is a sort of portable heart/lung bypass machine.

The machine was first developed for use in heart bypass surgery, and has also found utilization as a bridge to heart or lung transplantation and the treatment of other severe lung diseases.

In extreme cases of flu, severe inflammation can cause the lungs to fail. ECMO essentially takes on the function of the lungs for a period of time by routing a patient’s blood into the machine where carbon dioxide is removed and oxygen is added. The blood is then pumped back into the body. Patients can remain on ECMO until the inflammation is reduced and the lungs are capable of functioning normally on their own.

“These are very sick patients for whom traditional therapy such as a ventilator is simply not sufficient,” said Enrique Diaz, M.D., associate professor in the Division of Pulmonary, Allergy and Critical Care Medicine and head of the UAB ECMO program. “By taking on the functions of the lungs and/or the heart, ECMO supports the body’s normal function and gives these patients time to recover.”

Use of ECMO is a complicated process. Patients can remain on ECMO in the intensive care unit for several weeks if necessary. Many require rehabilitation after coming off the machine.

“ECMO is a very specialized treatment, and typically only major academic medical centers will have the equipment, expertise and experience to employ ECMO for flu cases,” said Diaz.

UAB has seven ECMO machines which have stayed busy since the start of flu season. Patients from hard-hit areas, including the Florida and Alabama Gulf Coast region, have been referred to the UAB ECMO program, along with patients from across Alabama.

“ECMO is not a cure, but it is a way to support some of these very critically ill patients who are failing conventional medical therapy, failing mechanical ventilation,” said Diaz. “Many patients are being saved through the use of this technology.”