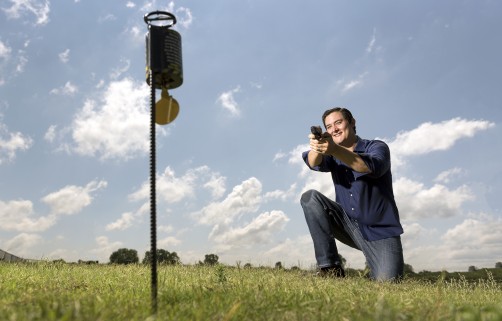 University of Arkansas at Little Rock Bowen law student Jody Shackelford, of Hardy, Arkansas, practices shooting with the Daisy Rocket Shot, an invention he created with his grandfather that will soon be sold in Walmart and other retail stores. 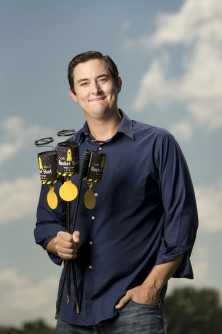 Newswise — Jody Shackelford has always had the entrepreneurial spirit.

Since graduating high school in 2004, the Hardy native has run his own photography business, a magazine, and a newspaper.

Now, the third-year University of Arkansas at Little Rock William H. Bowen law school student has embarked on his most successful entrepreneurial adventure to date.

The Daisy Rocket Shot, a child-friendly product that shoots aluminum cans into the air that can be shot with an air rifle or BB gun as target practice, is expected to be on the shelves of Walmart and other retailers by the end of the summer.

Shackelford created the product with his 85-year-old grandfather, Harry Shackelford. They reached a licensing deal with Gamo Outdoor, the parent company of Daisy Outdoor, to manufacture and sell the product.

“It’s surreal to me,” Shackelford said. “Me and my grandfather just made this product in our kitchen, and now it’s going to be in Walmart.”

As he grew up in the foothills of the Ozark Mountains, Harry Shackelford used cans and walnuts as targets to practice his keen shooting skills. In 2014, these fond childhood memories served as the inspiration behind the Rocket Shot.

“At first, it was just this funny idea that my granddad had,” Shackelford said. “I came up with a simple paper model with a spring and a coat hanger, and it worked. I thought we were on to something.”

Not having the funds to start to start a business, the Shackelfords built 12 Rocket Shots with household materials and sold them for $30 each. This gave the business duo enough capital to build 70 more, which quickly sold out at an outdoor gun show.

At that point, Shackelford took the product and auditioned for “Shark Tank,” the television show where budding entrepreneurs pitch their products to successful investors like Dallas Mavericks owner Mark Cuban and Lori Greiner, a celebrity personality on QVC-TV who has created more than 400 products.

While Shackelford made it to the second round, he ultimately did not land on the show. After that, the Shackelfords continued to build the products by hand in their kitchen and sell them at outdoor shows on the weekends.

Looking to take the product to the next level, Shackelford brought the Rocket Shot to Daisy Outdoor. When talks stalled, Shackelford approached Gamo at the Shooting, Hunting, Outdoor Trade Show in Las Vegas. The company recently purchased Daisy.

By October 2016, the Shackelfords struck a deal with Daisy and Gamo, which will now handle sales and manufacturing for the Rocket Shot.

Shackelford said his law school classes at Bowen have been extremely helpful in this venture, particularly his courses involving business law.

“Bowen has taught me about contract law, sales transactions, and the uniform commercial code,” he said. “When going into business, it’s important to have all the details finalized.”

After he graduates from Bowen in May 2018, Shackelford plans to become an attorney to serve his neighbors in Sharp County.

“There is a high need for lawyers in Arkansas,” he said. “In Sharp County, there are only about four lawyers for the whole county.”

As for the family business, Shackelford said his grandfather is “having a blast” working on what they hope will be the next successful product in their line of outdoor shooting targets.

“He’s 85, and he’s ready to rock and roll,” Shackelford said. “My grandfather has three or four more targets that he has invented, and we are getting the prototypes ready to show.”