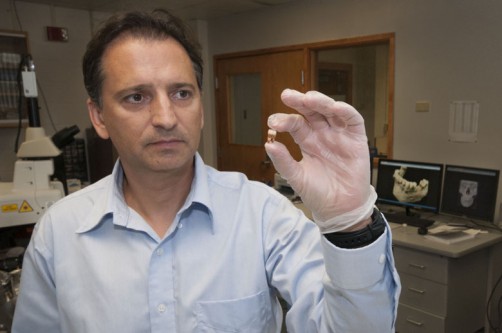 Revealing information UF geology professor George Kamenov has published research that shows trace amounts of lead in modern and historical human teeth can give clues about where they came from.

Newswise — GAINESVILLE, Fla. – Your teeth can tell stories about you, and not just that you always forget to floss.

A study led by University of Florida geology researcher George D. Kamenov showed that trace amounts of lead in modern and historical human teeth can give clues about where they came from. The paper will be published in the August issue of Science of The Total Environment.

The discovery could help police solve cold cases, Kamenov said. For instance, if an unidentified decomposed body is found, testing the lead in the teeth could immediately help focus the investigation on a certain geographic area. That way, law enforcement can avoid wasting resources checking for missing persons in the wrong places.

“We can use this pollution signal to figure out where these people came from,” he said.

Lead is composed of four variants, called isotopes. The amount of those isotopes fluctuates in different rocks, soils and ores – and, therefore, regions of the world.

Mining and other pollution-causing activities release that lead into the environment, and it accumulates in children’s bodies as they grow because kids inhale dust and ingest soil when they put their hands in their mouths.

Tooth enamel, which develops during childhood, locks in the lead signals and preserves them.

“When you grow up, you record the signal of the local environment,” Kamenov said. “If you move somewhere else, your isotope will be distinct from the local population.”

First molar enamel is finished forming by age 3, so it provides information about birth and toddler years. Incisor and canine enamel starts later and finishes around age 5, so it gives insight into early childhood. The third molar enamel does not start forming until age 8, so it indicates late childhood residences.

Lead analysis can also tell what time period a body is from.

Modern and historical teeth have different signals, according to the study. The natural composition of lead changed over the past century because of mining and the use of leaded gasoline, so there’s a clear distinction between modern and historical human exposure.

“You can go back in time, look at archaeological sites and try to reconstruct human migration,” Kamenov said.

But modern American teeth are like no others in the world, according to the study. Whereas available data for areas such as South America overlap with Europe, American teeth can be identified anywhere due to usage of ores with distinct isotope signals in the United States.

“What’s in the environment goes into your body,” Kamenov said.