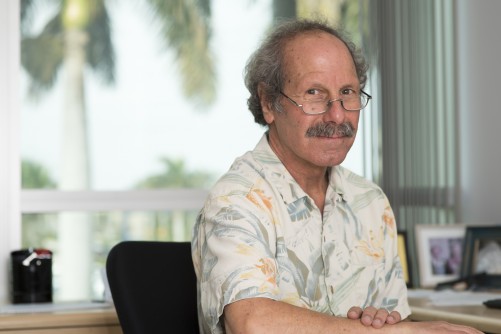 Lawrence Toll, Ph.D., a renowned scientist whose research focuses on the management of pain and drug addiction through pharmacology and new drug discovery, recently joined Florida Atlantic University as a professor in the Department of Biomedical Science in the Charles E. Schmidt College of Medicine and as an investigator in the FAU Brain Institute.

Newswise — Lawrence Toll, Ph.D., a renowned scientist whose research focuses on the management of pain and drug addiction through pharmacology and new drug discovery, recently joined Florida Atlantic University as a professor in the Department of Biomedical Science in the Charles E. Schmidt College of Medicine and as an investigator in the FAU Brain Institute. Toll is FAU’s first recruit under the 21st Century World Class Scholars Program established by the state of Florida.

Toll’s ground-breaking research on opioid-related systems, and nicotinic acetylcholine receptors, as well as his identification and characterization of endogenous neuropeptides, have opened new avenues of research and identified novel drug targets. He is internationally recognized as the co-discoverer of the endogenous neuropeptide, nociception, which plays a role in the regulation of reward and motivation pathways related to substance abuse.

Toll has received significant funding for his research from the National Institutes of Health (NIH), most recently receiving a five-year, $3.2 million grant from the NIH’s National Institute on Drug Abuse. The project titled, “Mixed NOP/mu Compounds and the Involvement of their Receptors in Analgesia,” will study chronic pain-induced changes in the NOP receptor in brain, spinal cord, and dorsal root ganglia to understand how this relates to the development and treatment of chronic pain.

“We are delighted to welcome Dr. Toll to our Florida Atlantic University family and to our scientists who are focused on chronic pain and combatting prescription opioid-use disorder, problems that have reached epic proportions in the United States,” said Janet Robishaw, Ph.D., professor and chair of the Department of Biomedical Science and interim senior associate dean for research in FAU’s College of Medicine, who is a leading functional and translational genomics researcher. “His contributions and research in the basic mechanisms and the biochemical basis of chronic pain and drug addiction will help to identify novel medications for both of these pervasive disorders.”

Prior to joining FAU, Toll served as the director of the neuropharmacology program at Torrey Pines Institute for Molecular Studies. He is a member of the Society for Neuroscience and American Society for Pharmacology and Experimental Therapeutics and serves as vice president/treasurer and president elect (term to begin in June) of the International Narcotics Research Conference. He is the current chair of the Opioid Receptor Subcommittee of the nonprofit International Union of Basic and Clinical Pharmacology.

“Drug overdose is the leading cause of accidental death in the United States, and Dr. Toll’s research is critical in helping us to better understand and address addiction, which is a primary, chronic and relapsing brain disease,” said Randy D. Blakely, Ph.D., executive director of the FAU Brain Institute and a renowned neuroscientist and leading expert in synaptic molecular biology, neurotransmitter transporters, and human genetics. “Dr. Toll will be an exceptional addition to the FAU Brain Institute, where we collectively seek to unlock the complexities of brain development, function and plasticity to help us understand the underlying mechanisms that drive devastating brain disorders such as addiction.”

Toll has published more than 130 research publications in peer-reviewed journals and serves as the associate editor of the journal Frontiers in Psychopharmacology and serves on the editorial board of the journal Neuropharmacology. Among the many honors and recognition he has received is winner of the “2002 SRI International Fellowship Award for Research Excellence.” He also holds six patents and three patents pending.

Toll earned his Ph.D. in biological chemistry at the UCLA School of Medicine in 1978, which was followed by postdoctoral fellowships at UCLA and in pharmacology at Johns Hopkins University School of Medicine in Baltimore, Maryland. In 1981, Toll joined SRI International in Menlo Park, California, as a senior receptor pharmacologist and then became program director and ultimately senior director of the neuropharmacology program at SRI International. On the international front, Toll established research collaborations in France where he worked as a visiting scientist from 1994 to 1995 and again from 2004 to

“I am both honored and excited to join Florida Atlantic University and look forward to working with the extraordinary team of scientists, faculty, students and community partners to fulfil the mission of the Charles E. Schmidt College of Medicine and the FAU Brain Institute,” said Toll. “Chronic pain and abuse of substances, including opiates, cocaine, alcohol, and nicotine, are some of society’s most intractable problems, which account for tremendous health care costs, in addition to incalculable pain and suffering.”

FAU’s Charles E. Schmidt College of Medicine is one of approximately 150 accredited medical schools in the U.S. The college was launched in 2010, when the Florida Board of Governors made a landmark decision authorizing FAU to award the M.D. degree. After receiving approval from the Florida legislature and the governor, it became the 134th allopathic medical school in North America. With more than 70 full and part-time faculty and more than 1,300 affiliate faculty, the college matriculates 64 medical students each year and has been nationally recognized for its innovative curriculum. To further FAU’s commitment to increase much needed medical residency positions in Palm Beach County and to ensure that the region will continue to have an adequate and well-trained physician workforce, the FAU Charles E. Schmidt College of Medicine Consortium for Graduate Medical Education (GME) was formed in fall 2011 with five leading hospitals in Palm Beach County. In June 2014, FAU’s College of Medicine welcomed its inaugural class of 36 residents in its first University-sponsored residency in internal medicine and graduated its first class of internal medicine residents in 2017.