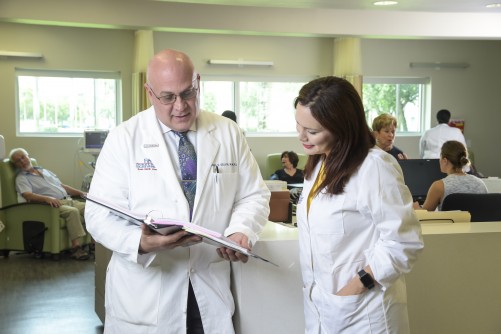 James E. Galvin, M.D., M.P.H., one of the most prominent neuroscientists in the country, and associate dean for clinical research and a professor of integrated medical science in Florida Atlantic University’s Charles E. Schmidt College of Medicine, has developed eight myths and truths about AD to shed light on this form of dementia that causes problems with memory, thinking and behavior.

Galvin also has developed the Quick Dementia Rating System (QDRS), which uses an evidence-based methodology to validly and reliably differentiate individuals with and without dementia. It can be completed by a layperson in three to five minutes, can detect when dementia is present and accurately stage the condition to determine if it is very mild, mild, moderate or severe.

Myths and truths about AD:

False: Although people may think and move a bit slower as they get older, forgetfulness is generally not part of growing older. It may take longer to remember where you put your keys, recall what you had for breakfast or remember your appointments for the day, but the answer usually comes back to you, or you know where to quickly find the answer. Consistent, daily problems with learning and remembering new information may be an early sign of AD. Interestingly, although many cognitive abilities seem to slow down as we age, vocabulary (learning and using new words) continues to grow throughout life.

True: Subjective memory complaints can be an early warning sign for AD. Studies going back more than 20 years suggest that people who believe their memory is changing, even if they still do well on testing, are at a higher risk to develop AD. This concept was recently incorporated into a new research framework supported by the National Institute on Aging and the Alzheimer’s Association. But remember, a risk factor does not mean you will develop AD, it suggests instead that there is an increased probability. If you believe your memory is changing, be sure to discuss it with your primary care provider and plan for annual evaluations. Or perhaps participate in a research study.

False: Depression is a common symptom affecting many older adults. If depression develops in later life, this could be an early sign of AD, beginning perhaps two to three years before any noticeable memory loss. If you feel sad, blue or depressed, have a loss of energy or interest in your hobbies or activities, have changes in sleep or appetite, or thoughts of guilt, worthlessness or low self-esteem, you should discuss this with your doctor. Depression is a very treatable condition, and no one should have to suffer.

False: While AD is the most common cause of memory problems, it is just one of more than a hundred conditions that can affect a person’s memory and thinking abilities. Many diseases that affect the brain such as Parkinson’s disease, strokes or multiple sclerosis can affect memory. Many conditions that affect other parts of your body also can affect your memory such as diabetes, thyroid disease or vitamin deficiencies. Lastly, many prescription and over-the-counter medications, either by themselves or in combination can affect memory, thinking, attention and concentration. You should always bring all your medications, including over-the-counter medicines, vitamins and supplements with you to your doctor appointments so that a thorough review can be done.

False (sort of): Most memory disorders such as AD are sporadic – that is they occur randomly in the aging population. Some research suggests that if your mother had AD, you may be at an increased risk, but still the greatest risk factor is old age. By age 85, roughly half of older adults have AD. However, about 2 to 5 percent of cases of AD are caused by gene mutations. Most of these are early onset (younger than age 65). If you are concerned and there is a strong family history of AD, discuss this with your doctor.

True (sort of): Large studies of populations suggest that people who play games (checkers, chess, cards), stay socially engaged (visit museums, attend concerts), try new activities (paint, music), exercise at least three times per week and eat a heart healthy diet (whole grains, fruits, fish, vegetables) may reduce the risk of getting AD. Additional studies suggest that these same lifestyle changes may reduce the progression of symptoms for people who already have AD. However, on an individual basis, it is unclear if any of these activities really protect us or if it is that people who are not doing these activities already have signs of the disease. On the other hand, a healthy, active lifestyle surely can’t hurt, and may in fact add to the quality of your life. A good rule of thumb to remember is what is good for your heart, is good for your brain.

False: In numerous studies, each of these supplements have failed to show any benefit in treating memory loss or reducing the symptoms of AD. Whether these supplements can reduce the risk of developing disease has not been rigorously studied. If you look and listen carefully, all advertisements for supplements include the following two statements: “These statements have not been evaluated by the Food and Drug Administration,” and “This product is not intended to diagnose, prevent, treat or cure disease.” Look for these sentences; they’re there, usually in small print or spoken very fast by the announcer!

Still to be determined, but I believe the answer is YES: Much of our work over the past decade has focused on developing instruments and protocols that would permit detection of cognitive impairment regardless of racial, ethnic, socioeconomic or geographic background. While the two strongest risk factors for AD – age and family history – cannot be changed, our research has identified strong risk factors that can be altered or moderated including diabetes and insulin resistance, hypercholesterolemia, obesity, hypertension, low muscle strength and physical activities, increased inflammation and poor dietary patterns. Considering the aging American population, the implications of this are astounding; affecting 40-50 million Americans who have many of these risk factors.

About the Comprehensive Center for Brain Health: