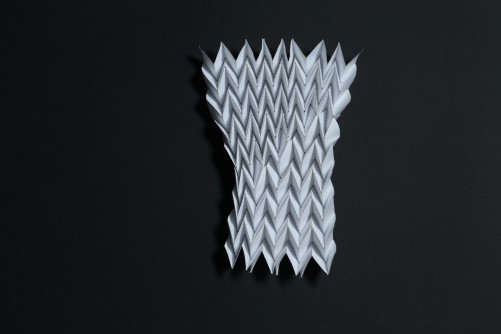 Physicists and materials scientists are using origami-based folding methods, or tessellation, for “tuning” the fundamental physical properties of thin sheets, which could help develop molecular-scale machines that snap into place and perform mechanical tasks.

Newswise — AMHERST, Mass. – A challenge increasingly important to physicists and materials scientists in recent years has been how to design controllable new materials that exhibit desired physical properties rather than relying on those properties to emerge naturally, says University of Massachusetts Amherst physicist Christian Santangelo.

Now he and physicist Arthur Evans and polymer scientist Ryan Hayward at UMass Amherst, with others at Cornell and Western New England University, are using origami-based folding methods for “tuning” the fundamental physical properties of any type of thin sheet, which may eventually lead to development of molecular-scale machines that could snap into place and perform mechanical tasks. Results are reported today in an early online edition of Science.

At a physics meeting a couple of years ago, Santangelo mentioned the unusual properties of a special type of origami fold called Miura-ori to fellow physicist Jesse Silverberg of Cornell, a long-time origami enthusiast. Miura-ori, named after the astrophysicist who invented the technique, is a series of folded parallelograms that change the stiffness of a sheet of paper based only on the crease pattern.

Also known as tessellation, this special folding, which occurs naturally in some leaves and tissues, arranges a flat surface using a repeated pattern of alternating mountain-and-valley zigzag folds. Objects folded this way contract when squeezed, a bit like an accordion, so they can be packed into a very small shape but unfolded with little effort from the corners. This technique has been used in space to launch satellites with solar arrays that can be unfolded using only a few small motors at the edges.

Santangelo explains, “As you compress most materials along one axis, they expand in other directions. In other words, squeezing a hunk of material causes it to leak out the sides. A rare class of materials, however, does the opposite. If you compress them along one direction, they collapse uniformly in all directions. Miura-ori shows us how to use this property to make new devices. Exotic materials can be formed from traditional materials simply by altering microscopic structure.”

Santangelo, with Silverberg and Itai Cohen at Cornell and Tom Hull at Western New England, describe in their new paper how to alter patterns and introduce defects to tune a thin sheet’s stiffness and create a material in which physical properties can be programmed and reprogrammed.

Silverberg says, “The work brings together origami, metamaterials, programmable matter crystallography and more. It’s totally bizarre and unique to have so many of these ideas intersecting at the same time.”

Santangelo says active materials can change their shape, size, and/or physical properties with changes in temperature, pressure, electro-magnetic fields, or other aspects of their environment. With such materials, researchers may be able to create entire structures and systems out of single pieces that are flexible, elastic and resilient.

Santangelo adds, “In particular, this gives us the ability to make a reprogrammable material. By toggling elements of the origami structure between two stable states, we can make the structure stiffer, selectively weaken certain parts, and so on. And we can do it reversibly. Given origami’s scale-free geometric character, this framework for metamaterial design can be directly transferred to milli-, micro- and nanometer size systems.”

He adds that metamaterials are rapidly emerging at the frontier of scientific and technological innovation due to their exotic and tunable material properties, which arise from arrangements of smaller units within the bulk system to generate exotic, non-natural properties on larger scales. Miura-ori can be considered a mechanical metamaterial because its stiffness can be controlled by the specific fold angles of the parallelograms, Silverberg explains.

The physicists point out that it is rare to find metamaterials that can be reconfigured beyond their original design, but origami-inspired mechanical metamaterials offer enhanced flexibility because their properties are linked to alterable folding pattern. So-called “pop-through defects” made by changing crease directions, can be introduced to change a sheet’s stiffness, so multiple stable configurations can come from a single structure yielding programmable metamaterials.

Using numerical simulations, Evans and Santangelo calculated the effect that a pop-through defect has on Miura-ori. They showed that it instantly makes the entire sheet stiffer, and the effect is additive. The Cornell group will present this research at the Sixth International Meeting on Origami in Science, Mathematics and Education on Aug. 10-13 in Tokyo.