Leave a Buffer for Your Bumper: Study Contradicts Practice of Traffic Light Tailgating 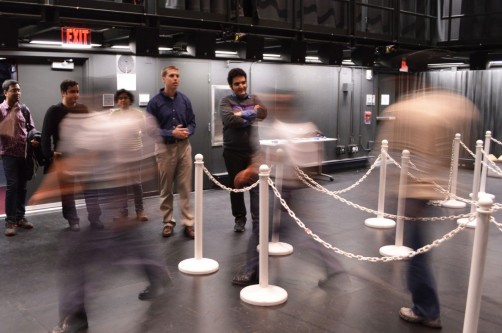 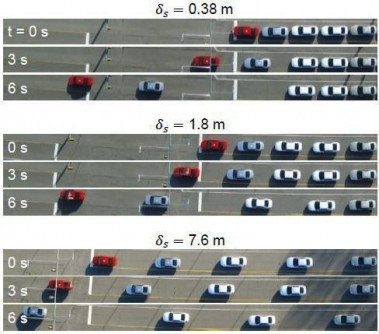 Using 10 volunteer drivers in identical vehicles, the researchers staged a series of experiments at the traffic light on the Virginia Tech Transportation Institute’s Smart Road. Drivers systematically lined up at the light in a set of distances ranging from 1.25 to 50 feet, and a drone helicopter hovering overhead captured controlled bird’s-eye-view footage of the traffic as drivers accelerated through the light.

When pulling up to a traffic light, most drivers get pretty close to the car in front of them, leaving just several feet of space between their bumper and the next.

The practice of packing tightly at traffic lights is widely accepted. Traditional thinking says the closer a car is to a traffic light, the more likely that car will be to pass through the intersection before the light turns red again.

Thanks to new research by Virginia Tech professors and students in the College of Engineering's Department of Biomedical Engineering and Mechanics, drivers now have a good reason to dismiss this faulty line of roadway intuition.

The study, published in the New Journal of Physics, used video cameras attached to drone helicopters to capture footage of cars accelerating through a traffic light on the Virginia Tech Transportation Institute Smart Road. By systematically controlling the packing density of the cars, the researchers discovered that any decrease in distance to the light was completely offset by the time it took for cars to regain a comfortable spacing before drivers could accelerate.

Drivers who pack tightly at intersections do not increase their chances of making it through the light, and tailgating at traffic lights can also lead to more rear-end collisions.

“We varied the bumper-to-bumper spacing between cars by a factor of 20 and saw virtually no change in how much time it took for the cars to pass through the intersection when the light turned green,” said Jonathan Boreyko, assistant professor in the Department of Biomedical Engineering and Mechanics. “The results mean there’s no point in getting closer to the car in front of you when traffic comes to a stop,” he said.

The inspiration for the research first came to Boreyko when he was sitting in traffic one day. Noticing that cars had to wait for the car in front of them to regain a safe spacing before they could start moving again, he hypothesized that, contrary to popular opinion, it might actually be better for cars to stop farther apart from each other when idling at a traffic light.

He teamed up with Farzad Ahmadi, a fourth-year Ph.D. student in Virginia Tech's engineering mechanics program and the study's lead author, to investigate.

Using 10 volunteer drivers in identical vehicles, the researchers staged a series of experiments at the traffic light on the Virginia Tech Transportation Institute's Smart Road. Drivers systematically lined up at the light in a set of distances ranging from 1.25 to 50 feet, and a drone helicopter hovering overhead captured controlled bird's-eye-view footage of the traffic as drivers accelerated through the light.

Analysis showed that the time required for all cars to pass through remained relatively fixed, give or take about one second, for spacing distances up to 25 feet.

The two researchers used the thermodynamic concept of latent heat, the energy that a system loses during melting or evaporation, to describe what happens to cars stopped at a traffic light. Vehicles are jammed into a "solid phase" at a light and must waste energy "melting" back into a "liquid phase" before they can actually move through the intersection.

Boreyko and Ahmadi wondered if latent heat would have such a dramatic effect on other systems, such as slow-moving pedestrian traffic. Should people waiting in lines space themselves closer together or farther apart in order to move through more quickly?

The researchers set up a second round of experiments in The Cube at Virginia Tech's Moss Arts Center, a highly adaptable theater and laboratory equipped with synchronized cameras. Undergraduate students Hunter Morgan, Josam Waterman, Pat Greer, and Will Doty - all in the engineering science and mechanics program and co-authors of the study - added a few conditions to their senior design experiments on human crowds to test Boreyko and Ahmadi's hypothesis.

"Latent heat had almost no effect for a line of pedestrians," said Boreyko. "The closer people got to each other, the faster they could empty the line. We realized that people move very slowly, but can accelerate very quickly, which minimizes the lag effect we saw with the cars at the traffic light."

The study's findings suggest that both pedestrians and drivers alike could see considerable benefits when taking a mindful approach to packing density in lines.

"Pedestrians waiting in a line should get as close to each other as possible if it's important for the line to empty quickly," said Boreyko. "But when you encounter a traffic jam or stop at a light, keep a safe and comfortable distance. You can just maintain whatever spacing you had when you were driving at full speed. You won't lose any time, but you'll reduce the odds of an accidental rear-end collision."

"When my father was teaching me how to drive, he told me that to prevent an accident, you should stop so you can easily see the rear bumper of the car in front of you at a traffic light," said Ahmadi. "I've never done that until I analyzed the data of this experiment."

B-roll video of traffic study from a drone helicopter 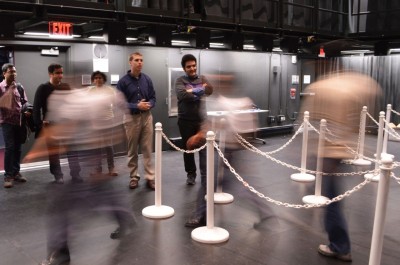 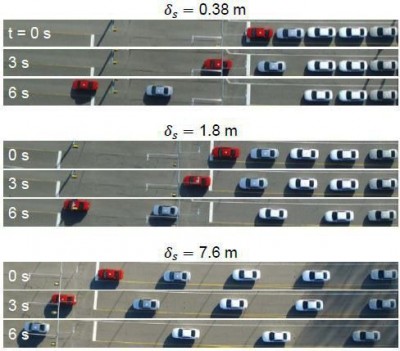 Caption: Using 10 volunteer drivers in identical vehicles, the researchers staged a series of experiments at the traffic light on the Virginia Tech Transportation Institute’s Smart Road. Drivers systematically lined up at the light in a set of distances ranging from 1.25 to 50 feet, and a drone helicopter hovering overhead captured controlled bird’s-eye-view footage of the traffic as drivers accelerated through the light.