Leg-Wing Cooperation in Baby Birds, Dinosaurs Is Key Transition in Origin of Flight 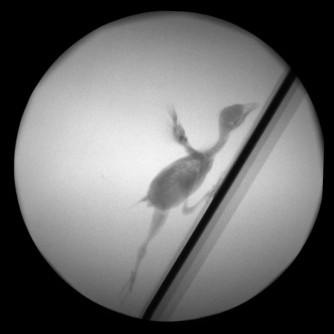 X-ray studies reveal that baby birds flap their tiny wings to help them climb steep slopes. The force generated by flapping pushes them forward as well as upward, improving traction as they climb. Non-bird dinosaurs might have done the same thing with their 'mini-wings' before flight evolved.

Newswise — New research based on high-resolution x-ray movies reveals that despite having extremely underdeveloped muscles and wings, young birds acquire a mature flight stroke early in their development, initially relying heavily on their legs and wings to work in tandem to power the strenuous movement. The new study, published today in the journal PLOS ONE, is important for understanding the development of flight in modern birds and reconstructing its origins in extinct dinosaurs.

"The transition from ground-living dinosaurs to flight-capable birds is one of the major evolutionary transitions in vertebrate history, because flight is the most physically demanding form of locomotion," said lead author Ashley Heers, a postdoctoral researcher in the American Museum of Natural History's Division of Paleontology. "The kind of flight that we normally think of in living birds--for example, what you might see in a pigeon or a robin--involved a huge evolutionary overhaul of the animal's basic body plan over time. And although scientists have been studying flight for more a century, there's actually a surprising amount that we don't know about how birds fly."

Adult birds have many anatomical features that presumably help meet the demands of flight. However, juvenile birds, like the first winged dinosaurs, lack many hallmarks of advanced flight. Instead of large wings, they have small "protowings," and instead of robust, interlocking forelimb skeletons, their limbs are more gracile and their joints less constrained. These traits are often thought to preclude extinct theropods--the group of dinosaurs most closely related to modern birds--from powered flight, but young birds with similar rudimentary anatomies flap their wings as they run up slopes and even briefly fly, challenging longstanding ideas about the origin of flight.

"For a long time, researchers weren't able to tell how birds were moving their skeletons because, of course, they are covered in feathers and muscles," Heers said. "This x-ray technique allows us to look at what's happening inside of the animals as they're performing different behaviors."

At Brown University, the researchers used XROMM to look at Chukar partridges (Alectoris chukar) at a variety of ages as they flapped their wings to help climb steep slopes--a behavior scientists call wing-assisted incline running (WAIR). They found that when flap-running at similar levels of effort, juvenile and adult birds show similar patterns of joint movement. Despite their undeveloped anatomy, young birds can produce all of the elements of the avian flight stroke and modify their wing stroke for different behaviors, just like adults.

How is this possible? The study suggests that the cooperation between a juvenile bird's legs and wings is key in early life: the force generated by flapping pushes the birds forward as well as upward, improving traction as they climb.

"When wings and legs are viewed in isolation, it is difficult to imagine how animals lacking flight adaptions could produce useful aerodynamic forces," Heers said. "However, flapping behaviors that involve cooperative use of wings and legs, like WAIR, require less muscle power and less aerodynamic force than level flight. Transitional behaviors therefore allow flight-incapable juveniles to transition to flight-capable adults in a continuous fashion, supplementing their underdeveloped wings and flight muscles with their legs until the flight apparatus can fully support body weight."

This wing-leg cooperation is a bridge between leg- and wing-based modes of locomotion. And the study indicates that extinct theropod dinosaurs might have done the same thing with their "mini-wings" before flight evolved.

"Baby birds anatomically look a lot like some of the dinosaur fossils that we see," Heers said. "And so, by studying baby birds and looking at how they actually use these dinosaur-like anatomies, we can get a better sense of how these long-extinct animals might have been using their wings."

Other authors on the paper include David Baier, Providence College; Brandon Jackson, Longwood University; and Kenneth Dial, University of Montana.

Funding for this study was provided by the National Science Foundation (NSF) Graduate Research Fellowship, award number GRFP-2007057068, NSF grant # 0919799, and by the W.M. Keck Foundation.

An XROMM video showing Chukar partridges of a variety of ages performing WAIR can be seen here: https://www.youtube.com/watch?v=ig_BPx0GLP8