Lessons Learned from Yeast About Human Leukemia: the Power of Basic Model Organisms in Human Health 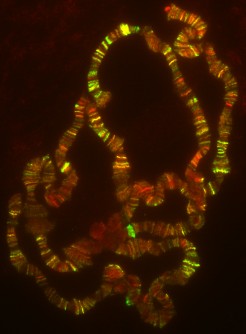 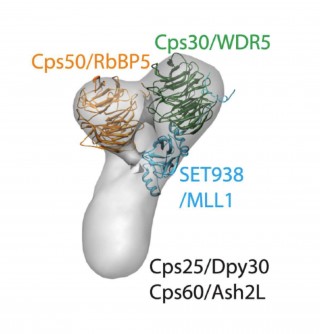 3D structure of the COMPASS core complex. The architectural blueprint of yeast and human enzymes is almost indistinguishable and provides important insights into the function of H3K4 methylases.

Newswise — KANSAS CITY, MO—The trifecta of biological proof is to take a discovery made in a simple model organism like baker’s yeast and track down its analogs or homologs in “higher” creatures right up the complexity scale to people, in this case, from yeast to fruit flies to humans. In a pair of related studies, scientists at the Stowers Institute for Medical Research have hit such a trifecta, closing a circle of inquiry that they opened over a decade ago.

Stowers investigator, Ali Shilatifard, Ph.D., and his team finally confirmed that the molecular mechanics of a key regulatory complex implicated in human leukemia, which Shilatifard had first identified in yeast, are the same on each rung of the evolutionary ladder, all the way from yeast to fruit flies to humans. In addition, the Stowers team, working closely with collaborators at the University of Michigan, revealed the common molecular shape at the center of the complex, which regulates gene expression through the methylation of histone H3, one of several DNA packaging proteins.

These findings are important, says Shilatifard, for understanding a fundamental developmental process⎯histone methylation. Understanding this protein modification, which protects, packages, and controls the output of expression from DNA, is essential for finding new ways to treat leukemia arising as a result of chromosomal translocations.

About 30 years ago, Janet Rowley, a physician and geneticist, was the first to propose that translocation, the swapping of chromosomal sections into abnormal locations during replication, was a cause of aggressive leukemia. Considered heresy at the time, Rowley’s theory was briskly dismissed, but gained adherents as evidence piled up that the translocation of one gene in particular was a marker for acute myeloid leukemia (AML) and acute lymphoblastic leukemia (ALL). This most commonly translocated gene became known as MLL or the “mixed-lineage leukemia” gene, and it is widely used today for diagnostics and determining therapy in patients.

Determined to explain just how the misplaced MLL causes leukemia, Shilatifard purified one of the first known interaction partners of human MLL about 16 years ago. Surprisingly, the protein functioned in transcription elongation, a key step in the process that leads to gene expression. Unable to make further progress on MLL in mouse models, he turned to a possible MLL homolog, a gene called Set1, in the humble baker’s yeast.

“About 12 years ago, we decided to use yeast, Saccharomyces cerevisiae, as a model system to learn about human leukemia,” Shilatifard recalls. “Everyone thought we were out of our minds.” Undaunted, the Shilatifard lab extracted Set1 protein from 300 liters of S. cerevisiae culture and found that Set1 belongs to a complex they dubbed COMPASS (Complex of Proteins Associated with Set1). In a major find, they had identified the first H3K4 (histone 3, lysine 4) methylase complex, an enzyme that modifies histones. Histones are protein spools around which long DNA helices are wound inside the cell nucleus. Methylation or demethylation (addition or removal of individual methyl groups) tightens or loosens histone spools, turning genes off or on.

More than a decade later, a study led by postdoctoral fellow Man Mohan, Ph.D., which graced the cover of the November 1, 2011, issue of Molecular and Cellular Biology, firmly connects the yeast complex, known as Set1/COMPASS, to its fruit fly homologs, three COMPASS-like complexes built around the Drosophila melanogaster gene, Trithorax (Trx).

The second study, published in the online Early Edition of the Proceedings of the National Academy of Science the week of December 5, 2011, features the work of postdoctoral fellow Yoh-hei Takahasi, Ph.D., who painstakingly reconstituted the Set1/COMPASS from its component molecules both in yeast and human cells.

Working with Gerwin Westfield in the lab of structural biologist Georgios Skiniotis at the University of Michigan, they used state-of-the-art electron microscopy techniques to map out the Y-shaped molecular structure at the heart of the complex. “It was a very challenging project, but I am so glad to see Ali’s many years of effort come to fruition and my lab being part of this breakthrough,” says Skiniotis.

The mechanisms of histone methylation such as the Set1/COMPASS complex are conserved by evolutionary selection across a wide range of eukaryote organisms, which is why Shilatifard was able to move from the Set1/COMPASS in yeast to three COMPASS-like complexes involving trithorax in Drosophila, to six COMPASS-like complexes in MLL in humans. These factors are now known as the COMPASS family.

“Given the conservation of COMPASS family from yeast to human, having the 3D structure of the core complex not only reveals the fundamental architectural blueprint, but provides molecular insights into the function of the H3K4 methylase complexes,” says Shilatifard. “And guess what?” says Shilatifard. “Comparing the overall architectures we cannot tell the difference between the yeast enyme and the human enzyme. They look almost identical!”

It’s been a long but satisfying scientific journey to bring the Set1/COMPASS story together, says Shilatifard. “So the lesson learned is that yeast is an excellent model for studying the molecular basis of human leukemia.”

The work was funded in part by the Stowers Institute for Medical Research, the National Institutes of Health and the Jane Coffin Childs Memorial Fund.

Currently the Institute is home to over 500 researchers and support personnel; over 20 independent research programs; and more than a dozen technology development and core facilities. Learn more about the Institute at www.stowers.org. 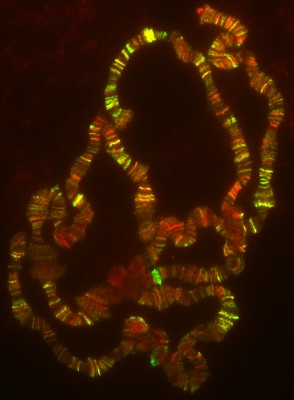 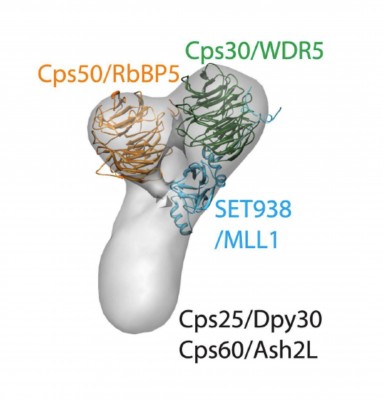 Caption: 3D structure of the COMPASS core complex. The architectural blueprint of yeast and human enzymes is almost indistinguishable and provides important insights into the function of H3K4 methylases.