Let It Ride: Expanding Diagnostic Services in Ghana Through Ride-Sharing

Some taxis in the northern part of the country will soon have new passengers: pathology samples en route to labs for testing. 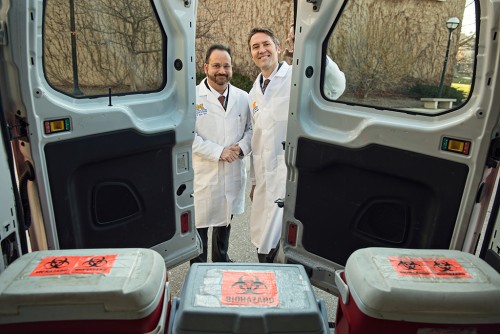 Newswise — Michigan Medicine pathology faculty are behind the wheel of a new project to expand laboratory testing capacity in Ghana in a novel way: through ride-sharing.

Lee Schroeder, M.D., Ph.D., who has long advocated for expanded lab services in the developing world, and Ulysses Balis, M.D., whose pathology informatics development team is standing up a new specimen-tracking solution to be used at U-M, plan to launch the service.

It’s not to bring patients to the labs, but rather to deliver samples for testing. The project will roll out this year in and around Tamale, in northern Ghana.

“In many places, lab resources are underutilized. Facilities that could run as many as 90 molecular tests a day are only running, say, 5,” says Schroeder, an assistant professor of pathology. “The challenge is connecting patients in need of tests, who are often in smaller cities and rural areas, with labs in the urban centers that have the capability and capacity to perform the tests.”

In the U.S., such samples are handled by couriers, a reliable service infrastructure that Ghana lacks.

“But there already exists a deep transportation network. Traffic is going back and forth to the city all the time, so we want to create an online service marketplace — basically the Uber approach,” Schroeder says.

In November, Schroeder and Balis, a professor of pathology and computational scientist, were awarded a Global Grand Challenges Grant from the Bill and Melinda Gates Foundation. Their pitch: Develop a smartphone application to connect scarcely resourced regional health centers with drivers willing to transport patient samples to well-equipped labs for testing.

The initial pilot aims to establish reliable deliveries between several small district hospitals and the Tamale Zonal Public Health Laboratory, part of the Tamale Teaching Hospital, about an hour away.

The software behind the project will be adapted in part from Michigan Medicine’s own tracking technology. On any given day, the pathology informatics team is tracking thousands of patient samples being shuttled around the medical campus, as well as to Ann Arbor from the health system’s many regional clinic sites. This spring, pathology will begin moving many services to the U-M North Campus, meaning even more off-site sample deliveries and the need for an updated tracking system to handle the anticipated increase in specimen-transport volume.

“By happenstance, we were in the process of building a new tracking tool when Lee approached me about this project,” says Balis. “As we spoke, the idea immediately gelled: Can we repurpose this sophisticated tool for use in a low-resource environment?”

Ride-sharing companies like Uber and Lyft allow users to request rides using a GPS-enabled smartphone. Requests are relayed in real time to a network of drivers in the area who can opt to make the pick-up based on their location and where the rider needs to go. Coincidentally, Uber launched operations in Accra, Ghana’s capital city, in 2016, though the service is not yet available elsewhere in the country.

For their project, Schroeder and Balis plan to recruit local taxi drivers who, for a little extra money, could presumably incorporate sample delivery into already-scheduled trips. Health centers will designate pick-up locations and drivers will be trained on specimen viability so they can make informed decisions about the feasibility of timely delivery. The app will track deliveries in real time, and the Ghanaian Health Service will supply insulated transport containers to be monitored during the pilot for temperature regulation.

“Our partners in the labs and clinics are really excited to try this and think it can be useful,” Schroeder says. “What makes sharing economies work is when they focus on a niche population and make the experience really convenient, so that is our goal. If we can just focus on this one small problem — transporting blood samples and making it incredibly convenient — we think it will be successful.”

The $100,000 Gates award will fund an 18-month pilot, with initial deliveries taking place as early as the spring. There could be opportunities to expand to other sites if things go well.

“There are definitely going to be challenges. But if this works — and we think it will — it could pretty readily be adapted to other areas,” says Balis. “That’s what makes it so compelling. Access to diagnostic testing is not a problem that is unique to Ghana, and the democratization of lab testing services could be transformational for the health of many, many people.”