How dying cells detach from their neighbours 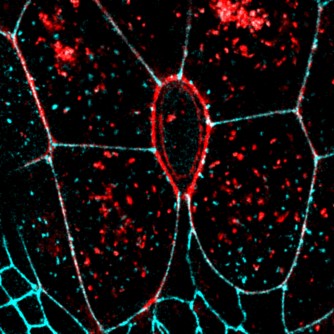 Figure: The purse-string (red-oval) contracts to detach the dying cell from its neighbours.

Newswise — Researchers from the Mechanobiology Institute, Singapore (MBI) at the National University of Singapore have described how dying cells detach and are expelled from a tissue, and how tissue tension in the region surrounding a dying cell is remodelled. The work was published online in the scientific journal Development in November 2016.

The tissues in our bodies, such as epithelial, nervous or muscle tissue, are all made up of millions of cells that are tightly packed together. Each cell lives in these conditions as an individual unit, but with their primary function dictated by the overall role of the tissue. Epithelial tissue, is found on the surface of organs or in the bodies cavities, and provides a means of protection; preventing fluids and other nutrients from leaking out of the body, and stopping harmful toxins from entering.

The integrity of any tissue is crucial for their function, and this is especially the case with epithelial tissue. Just as a plastic bag would leak if it was punctured, so too would epithelial tissue if cells are damaged through injury or disease. Cells are also prone to dying when they are damaged and even the smallest holes left when a single cell dies, must be filled immediately in order to maintain the integrity of the tissue. The dying cell however, needs to be detached from its neighbours, and expelled, in a process known as cell extrusion. If this does not occur, the dying cell is stacked in the tissue and causes further damage to the neighbouring healthy tissue. Removing a dying cell from a tissue without compromising the tissue integrity is therefore, not a trivial process.

How dying cells are removed from epithelial tissue

To understand how dying cells are removed from epithelial tissue while the surrounding tissue remains intact and functional, MBI researchers, led by Assistant Professor Yusuke Toyama from the Institute, furthered their earlier investigations by viewing cells in a developing fruit fly pupae using live imaging.

By analysing properties of cells surrounding a dying cell, as well as the dying cell itself, the team revealed a carefully choreographed sequence of molecular events that revolved around an interplay between the molecular structures holding the cells together, and the protein based contractile cables in cells located in the immediate area.

Firstly, the proteins that connects the dying cell to its neighbours begin to be remodelled. Normally these adhesive structures exist in between cells of a tissue to physically hold the cells together. They also provide a means of communication between the cells. As the adhesions are remodelled and the protein components that make up the adhesions are reduced, the cells surrounding the dying cell essentially let it go. The result is a temporary reduction in tissue tension that extends into the tissue, away from the dying cell. This disengagement of cell adhesions allows the cell to be released from the tissue. However, to prevent the tissue from becoming leaky, the hole left behind must be closed immediately.

This process was found to involve the formation and contraction of a protein based cable that passes through each cell surrounding the hole. Although this “purse-string contraction” has been described previously, the authors discovered that its formation was directly linked with the reduction in cell-cell adhesion components, and the subsequent detachment of the dying cell from its neighbours.

In this case, it is the release of tension that was proposed to be the event that triggers the accumulation of the proteins required to make the contractile cable. The contraction of the cable then rebuilds tissue tension, which forces the cells that surround the hole to become stretched. Stretching the cells brings them within proximity of the cells on the other side of the hole, with which they can form new cell-cell contacts. This eventually reseals the gap that transiently formed to let the dying cell go.

Ultimately, these findings provide new insights into the dynamic cellular processes that occur when tissue integrity is compromised. To avoid harmful consequences the body initiates a sequence of events that, as this study shows, is highly co-ordinated, and dependent on the physical interactions occurring at the cellular level. With tissue engineering reliant on our better understanding of how our bodies naturally form and maintain healthy tissue, the findings from this study will help scientists better implement engineered tissues in the future.