Dr. John Dick, Senior Scientist at the Princess Margaret and co-principal investigator on the study, and Dr. Sagi Abelson, study author and post-doctoral fellow in the Dick Lab, discuss their research findings. 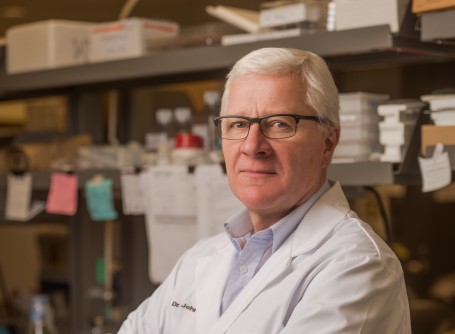 The findings, published today in Nature, illuminate the ‘black box of leukemia’ and answer the question of where, when and how the disease begins, says co-principal investigator Dr. John Dick, Senior Scientist at Princess Margaret Cancer Centre, University Health Network.

“We have been able to identify people in the general population who have traces of mutations in their blood that represent the first steps in how normal blood cells begin on a pathway of becoming increasingly abnormal and puts them at risk of progressing to AML. We can find these traces up to 10 years before AML actually develops,” says Dr. Dick. “This long time window gives us the first opportunity to think about how to prevent AML.”

Dr. Dick is also a Professor, Department of Molecular Genetics, University of Toronto, holds the Canada Research Chair in Stem Cell Biology, and is Co-Leader of the Acute Leukemia Translational Research Initiative at the Ontario Institute for Cancer Research.

Study author Dr. Sagi Abelson, a post-doctoral fellow in the Dick lab, says: “AML is a devastating disease diagnosed too late, with a 90 per cent mortality rate after the age of 65. Our findings show it is possible to identify individuals in the general population who are at high risk of developing AML through a genetic test on a blood sample.

“The ultimate goal is to identify these individuals and study how we can target the mutated blood cells long before the disease actually begins.”

The study builds on Dr. Dick’s 2014 discovery that a pre-leukemic stem cell could be found lurking amongst all the leukemia cells that are present in the blood sample taken when a person is first diagnosed with AML. The pre-leukemic stem cell still functions normally but it has taken the first step in generating pathway of cells that became more and more abnormal resulting in AML (Nature, February 12, 2014), and continues his quest to trace every step in the evolution of AML, starting with blood cells from healthy people.

“Our 2014 study predicted that people with early mutations in their blood stem cells, long before the disease appears and makes them sick, should be able to be detected within the general population by testing a blood sample for the presence of the mutation.” says Dr. Dick.

Co-principal investigator Dr. Liran Shlush, a former fellow in the Dick lab, and now Senior Scientist at the Weizmann Institute in Israel, led the approach to use data from a large European population health and lifestyle study that tracked 550,000 people over 20 years to determine correlations to cancer.

The leukemia team extracted the data from more than 100 participants who developed AML six to 10 years after joining the study, plus the data from an age-matched cohort of more than 400 who did not develop the disease.

Dr. Dick says: “We wanted to know if there was any difference between these two groups in the genetics of their ‘normal’ blood samples taken at enrollment. To find out, we developed a gene sequencing tool that captured the most common genes that get altered in AML and sequenced all the 500 blood samples.”

The answer was “Yes”. The seeds of the blood system started picking up mutations years before an individual was diagnosed with AML, a finding that enabled the team to predict accurately who had been at risk of disease progression.

Furthermore, the team used advanced computational technology to assay the information obtained from routinely collected blood tests taken over 15 years in Israel and housed in a massive database of 3.4 million electronic health records.

The study has deepened our understanding of the distinction between AML and a common feature of aging called ARCH–age-related clonal hematopoiesis–whereby blood stem cells acquire mutations and become a little more proliferative. For the vast majority of people this is just a completely benign feature of aging.

“Every AML patient has ARCH but not everyone with ARCH gets AML,” explains Dr. Dick.

Major international collaborators included the Wellcome Sanger Institute and the University of Cambridge in the UK; the Weizmann Institute of Science and the Clalit Research Institute in Israel.