Life on Terra Firma Began with an Invasion 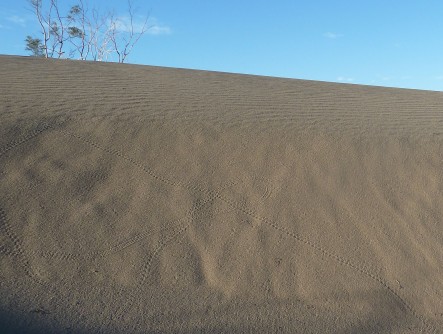 Trackways of modern arthropods on a desert dune. Examples like these, found preserved as fossils from millions of years ago, form the data in this study

Life on terra firma began with an invasion

Newswise — Scientists are now confident animal life on solid ground started with a few short bursts of marine creatures making the leap from the oceans.

New research at the University of Portsmouth also paints a clear picture of how animals rapidly spread out and changed once they made the leap.

The research, led by Dr Nicholas Minter of the University’s School of Earth and Environmental Sciences, is published in Nature Ecology and Evolution.

The first study to use trace fossils – the footprints of animal behaviour such as tracks and burrows – shows how a major evolutionary step for the Earth, the colonisation of land, took place.

The initial invasion happened across the world, from the fringes between land and oceans, followed by expansion later into floodplains, rivers, deserts and lakes.

It is the first time such a pattern has been identified using trace fossils to track the evolution of animal behaviour, their modes of life, and the ways in which they interacted with their new environments.

Dr Minter said: “When the first animals emerged from the oceans they had a blank canvas, there were no other animals there and so they diversified rapidly both in how they behaved and in the ecological roles, or the part they played, in the theatre of life.”

This evolutionary step-change – an early burst of rapidly adapting and diversifying to new environments, followed by a long period of little change – has been seen in the shapes and sizes of animals but this is the first time it has been shown for their behaviour.

“Not many from any one group, or Phylum, made the transition from sea to land or fresh water,” said Dr Minter.

“What’s surprising is the leaps in evolution follow the same pattern – an early evolutionary burst of rapid diversification and a long period of relative calm – each time animals conquered new habitats, first the margins between sea and land, then floodplains, followed by rivers, deserts and lakes.

“Each burst was an evolutionary experiment, yet the results are very similar.

“As scientists, we know experiments tend to have different outcomes if you change the parameters, but in this case, there is a consistency which suggests a fundamental constraint on the behavioural and ecological roles fulfilled by animals on land.”

The exhaustive study – a seven-year-long analysis of all known trace fossil data spanning a 200 million year period of Earth history – has the potential to tell us about our future, too, he said.

“We now have a framework we can use to apply to other questions and allows us to compare ancient and living communities. This framework may help us understand if modern communities are undergoing fundamental changes, as ancient ones have in the past, for example, in response to climate change.”

Trace fossils tell us a great deal about animal life, including who was there, when and how they behaved. Although Dr Minter’s research included examining reports of hundreds of trace fossils from hundreds of rock formations around the globe, the planet has not given up all its secrets.

He said: “This is not necessarily the final word. Another major step-change that took place was the evolution of social insects, such as ants and termites, which worked together to build complex structures and societies. More recently too, in the evolution of animals was the emergence of intelligent life – animals which could make and use tools, including humans and our ancestors, apes. We are yet to investigate how animals diversified and modified their environments during these events and how this shaped our planet.”

CAPTION: Trackways of modern arthropods on a desert dune. Examples like these, found preserved as fossils from millions of years ago, form the data in this study.