Lifesaving Procedure Puts Somerset Man Back in the Driver’s Seat 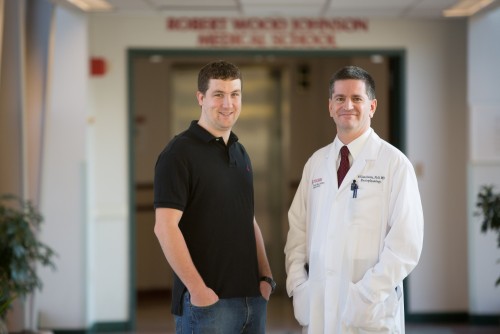 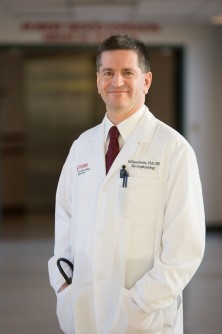 Newswise — At 31, Somerset resident Shawn Fohs was the picture of good health: fit, with no chronic health conditions, and a reputation of never getting sick. He walked a few miles a day as a result of his job in Manhattan as a cybersecurity consultant for EY and tried to fit in a little time after hours to work out at the gym each week. And, a 2-year-old daughter and one just months old kept his home life active as well. But on Aug. 2, an undiagnosed heart condition nearly cost Fohs his life. He awoke early that morning with his heart beating irregularly—a feeling he had never experienced before. “I didn’t know what was going on,” he recalls. “I decided I would try to take a shower and relax for a few minutes to see if that helped. Fifteen minutes went by and I still didn’t feel right, so I told my wife I was going to drive to the hospital and get checked out.” Grabbing his car keys for the two-mile drive to the hospital, Fohs made it as far as his front door before collapsing. His wife, Amanda, found him unresponsive on the floor in cardiac arrest and called 9-1-1. When the emergency medical service arrived, they performed CPR, shocked him with a defibrillator, and transported him to the emergency department at Robert Wood Johnson University Hospital. It was there that Fohs’ EKG revealed a “pre-excitation” pattern, often called a Wolff-Parkinson-White (WPW) pattern. This pattern suggests that an individual has an extra electrical connection between the upper and lower chambers of the heart, says Dr. William J. Kostis, a cardiac electrophysiologist and assistant professor of medicine at Rutgers Robert Wood Johnson Medical School. “This extra connection, or accessory pathway, may lead to abnormal heart rhythms and, in turn, to symptoms, in patients with the so-called WPW syndrome,” Dr. Kostis explains. The WPW pattern is relatively uncommon, with only a couple people per thousand having it, and the syndrome, even less so, he says. In Fohs’ case, he also had an additional abnormal heart rhythm, paroxysmal atrial fibrillation (AF), in which the upper chambers of the heart have rapid, disorganized electrical activity. And while AF alone can mean an increased risk for stroke and a decline in the heart’s ability to effectively move blood through the body, it can have especially dire results in people like Fohs who have an accessory pathway, Dr. Kostis says. “If these individuals go into AF, the electrical signals may conduct rapidly through that accessory pathway, which can subsequently cause ventricular fibrillation [VF],” he explains. “In VF, the ventricles quiver in an uncoordinated pattern instead of contracting properly, which means blood is not being pumped from the heart. It’s a life-threatening condition that typically results in sudden cardiac death.” When testing revealed evidence that this had occurred with Fohs, RWJ specialists started him on medication to stabilize the condition and immediately took steps to prepare to rectify the issue. Within a few days, he was in RWJ’s cardiac catheterization lab, where Dr. Kostis performed a catheter ablation. After recovering overnight in the hospital, Fohs was monitored for a few weeks using an ambulatory monitor to help ensure that the procedure had been successful and that there were no other signs that the extra pathway had returned, Dr. Kostis says. “After the procedure, I was sore for a few days, but it wasn’t anything significant. No real pain,” he says. “Overall it was a positive experience, and all of the doctors went out of their way to explain what had happened and the procedure that would be performed.” Regaining his active lifestyle has been important for this young father and former racing enthusiast. Though he’s retired from the track since having children, Fohs was a go-kart racer from the age of 12 who amassed more than 100 first-place finishes over the next nine years. He also raced BMX throughout the northeast and ITB (Improved Touring B) cars at all major road tracks in the northeast. As someone used to being in the driver’s seat, the prospect of having something occur that is beyond one’s control can be a bit disconcerting. “Prior to this happening, I’d had no other issues, no prior symptoms,” says Fohs. “It was a very unique situation that I was in. I’ve come to acknowledge that there wasn’t anything I could have done to prevent what happened. It’s something that could happen to anyone.” In fact, says Dr. Kostis, many people with a WPW pattern never experience any symptoms. In those who do, symptoms can include rapid heart palpitations, lightheadedness, dizziness, shortness of breath, and chest discomfort. Because WPW patterns are one of the well-known risk factors for elevated risk of cardiac arrest, anyone who has such a pattern and is asymptomatic should still be seen by a cardiologist, Dr. Kostis advises. It is a good idea for individuals who have an arrhythmia or an arrhythmia-associated EKG pattern to be evaluated, he adds. Now that Fohs has undergone treatment, he is happy to once again be back in the driver’s seat with his wife and daughters, thanks to the great care he received. 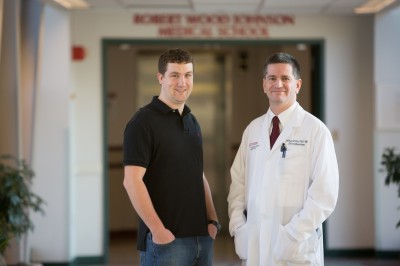 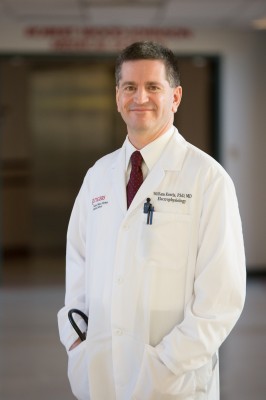