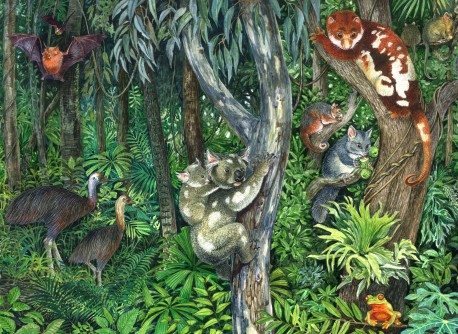 Lowland mid Tertiary rainforest of Queensland, Australia, including archaic koalas that reveal evidence about the origin of their distinctive vocalizations.

Newswise — The world at large knows koalas as cute, cuddly, lovable iconic animals. The evolutionary biologist, on the other hand, will know them as extremely specialized, endangered animals, the evolutionary history of which is extremely poorly understood.

Recently discovered skull material belonging to the extinct koalas Litokoala and Nimiokoala offers a major step forward in understanding koala evolution, according to a new study published in the Journal of Vertebrate Paleontology. The study, which was carried out by a team led by Dr. Julien Louys of the University of New South Wales in Sydney, Australia, focused on the evolution of the masticatory (chewing) apparatus and hearing.

At the time these extinct koalas lived, the Australian continent was wetter and much more forested than it is today. As the continent dried out and the flora became dominated by plants with hard, tough leaves, animals such as koalas had to adapt to this new food resource. The team led by Dr. Louys found that the chewing apparatus of the living koala is much more specialized than its fossil forebears, including adaptations for more powerful bite forces and the ability to shred the tough leaves of the eucalypts that are the mainstay of its diet.

In contrast, analysis of the middle ear suggests that differences between the fossil and living koalas are relatively small. This indicates that the specialized loud and complex vocalizations of living koalas – a trait unusual among marsupials – likely have an ancient origin. The study therefore shows that the chewing apparatus and hearing adaptations in living koalas evolved at different times and under different environmental circumstances, an indication that adaptations, even in the most specialized animals, may have disparate origins and evolve in mosaic fashion.

ABOUT THE SOCIETY OF VERTEBRATE PALEONTOLOGYFounded in 1940 by thirty-four paleontologists, the Society now has more than 2,300 members representing professionals, students, artists, preparators and others interested in VP. It is organized exclusively for educational and scientific purposes, with the object of advancing the science of vertebrate paleontology.