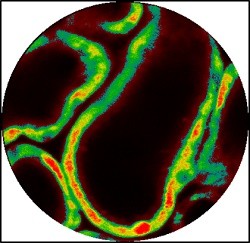 If clinical trials affirm the instruments’ value in humans, the researchers say, the scopes could one day reduce our dependence on invasive biopsies for diagnosing cancer and other diseases.

“These tools are able to look into organs, such as the bile duct, pancreas and lungs, giving us a faster and safer way to diagnose a variety of diseases,” says Xingde Li, Ph.D., professor of biomedical engineering at the Johns Hopkins University School of Medicine.

In a paper published Nov. 3 in Light: Science & Applications, the investigators described the development of an advanced miniature two-photon endomicroscope that uses cells’ native ability to fluoresce, or “glow,” without the use of injected dyes to gather cellular structural images and functional information on the metabolic status of the organs they populate.

“Getting label-free images is important because the chemicals traditionally used to label biopsy samples in a lab could be harmful if used directly inside the human body,” says Li.

Fluorescence is the emission of energy from molecules as their electrons move from an “excited” state back down to their normal energy levels, called the ground state. Just as neon highlighters glow under a UV lamp, animal cells can fluoresce and provide real-time information on their activity and function.

To exploit this ability, Li and his team developed an endomicroscopic probe that uses a technique known as two-photon imaging—the current workhorse of laboratory imaging for tissue samples—in which two photons of light are simultaneously absorbed by a molecule to cause it to fluoresce.

To miniaturize this microscopy technology, Li and his team needed to condense the capabilities of a benchtop two-photon microscope into a probe only about 2 mm in diameter. “We couldn’t simply shrink the microscope that has dozens of distinct bulky parts, so we started a new design from scratch,” says Li.

The team used a short-pulsed laser to create bursts of photons and transmit them down a flexible, specially designed fiber optic cable connected to the probe. The photons then travel through a miniature lens, which also functions to refocus the fluorescence light from the cells and send it back to detectors through the same fiber optic cable. The researchers also designed the probe to capture 3-D images by incorporating a very small scanner, which changes which areas of the organ the light is emitted to. This allows researchers to gather more information about the tissue around the probe.

A major challenge in developing this technology, Li says, was ­­re-collecting the fluorescence light from the cells into the same tool. The lens had to be carefully crafted to focus the long-wavelength light emitted from the laser while also collecting the short-wavelength fluorescence light emitted from the cells. The fiber optic cord also had to be custom created for this technology to transmit both the excitation and fluorescence light while minimizing the background noise generated in the fiber optic cable. Commercial fibers contained germanium-doped cores, which after years of troubleshooting were found to be the primary source of interfering signals within the fiber optic cable.

Because the probe can capture images of live tissues within the body, the researchers were able to monitor changes in the metabolic activity of cells, which could be indicative of cancer, stroke or heart disease, without using a chemical label—a major advancement from similar techniques that lacked the sensitivity to capture such subtle, but distinct, dynamic changes.

The probe was also able to monitor structural changes in various types of tissues, which could be useful in diagnosing conditions where biopsies are not an option. One such application is in the prediction of preterm births. In mice, the researchers were able to assess the mechanical strength of the cervix by monitoring changes in the collagen structures within the tissue and predict which mice would give birth prematurely.

The probe, he estimates, costs less than $1,000 to produce, and cost would drop dramatically with mass production.

In a second article published Nov. 16 in Nature Communications, the team described a novel ultrathin optical coherence tomography (OCT) probe that has allowed researchers to gain three to four times higher resolution when compared to similar technologies in clinical use today. “To achieve this, we had to use a light source with a broader spectrum of color, and the challenge was to focus all those colors onto a single spot without making the image look fuzzy,” says Li. “Cameras do this by using a large lens, but we did not have that luxury.” The improvements also included reducing the probe by about half the size of those currently in use to about 500 micrometers in diameter, about the same width of a salt crystal.

To achieve this, Li and his team simplified the design by precisely forming the end of the fiber optic cord into a tiny ball lens made out of silica, which was able to work as well as its larger counterpart. The ball lens is then precisely ground and coated with gold to reflect and focus the light onto the tissue.

In addition, Li and his team found the small probe had an improved flexibility that allowed them to access and image small lumens in complex organs in animals—such as the small airways deep in a sheep’s lungs—with much clearer visualization on tissue structures than a standard OCT instrument.

Li hopes that if clinical trials approve the instrument for use in humans, the new probe will reduce dependence on biopsies to diagnose heart disease and cancer. This is especially important, he says, for probing organs such as the pancreas, which is not only hard to access with current endoscopic probes, but is also dangerous to biopsy.

“Ultimately, we want to be able to get images good enough so that we don’t have to remove tissue from the patient,” says Li.

The new probe also promises to be less expensive than currently used probes, which run from $800 to $1,000 dollars per probe. Li’s probe has a materials cost of $20–$50. This significant reduction in cost is important for technologies intended for one-time use in humans.

Li and his team hope to begin clinical trials for their OCT and two-photon probes to establish their safety and efficacy in humans.

Other researchers involved in the Nature Communications paper include Wu Yuan, Robert Brown, Wayne Mitzner and Lonny Yarmus of the Johns Hopkins University School of Medicine.

Other researchers involved in the Light: Science & Applications paper include Wenxuan Liang and Gunnsteinn Hall of the Johns Hopkins University School of Medicine Department of Biomedical Engineering, Bernhard Messerschmidt of GRINTech, and Ming-Jun Li of Corning Incorporated.

Funding for the Light: Science & Applications paper was provided by the National Cancer Institute (R01CA153023), the National Science Foundation (CBET-1430040) and the Hartwell Foundation.