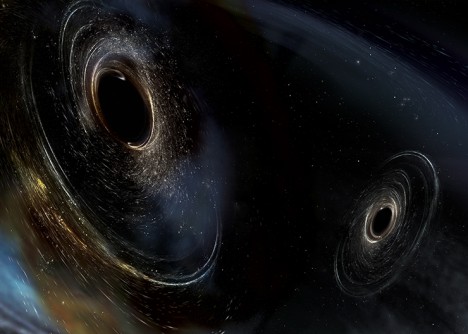 Newswise — EVANSTON - One, two and now three historic waves have come from deep space — confirmed again by a chirping sound that was like music to the soul for the worldwide group of scientists waiting for it.

An international research team, including Northwestern University scientists and engineers, today (June 1) announced the third detection of gravitational waves -- ripples in the fabric of space and time, first predicted by Albert Einstein more than a century ago.

The Laser Interferometer Gravitational-wave Observatory (LIGO) made the detection Jan. 4, 2017, demonstrating that a new window in astronomy has been firmly opened. Gravitational waves pass through Earth and can be “heard” by the extremely sensitive LIGO detectors. As was the case with the first two detections, the waves were generated when two black holes merged to form a larger black hole.

The long-awaited triumph in September 2015 of the first-ever direct observation of gravitational waves completed Einstein’s vision of a universe in which space and time are interwoven and dynamic.

The third and latest detection points to merging black holes that are twice as far away from Earth as the two earlier pairs -- about 3 billion light-years away. And this time the two black holes were unequal in size, one significantly lighter than the other. They merged into a black hole whose size is in the middle of the other two merged black hole pairs.

“Our handful of detections so far is revealing an intriguing black hole population we did not know existed until now,” said Northwestern’s Vicky Kalogera, a senior astrophysicist with the LIGO Scientific Collaboration (LSC), which conducts research related to the twin LIGO detectors, located in the U.S.

“Now we have three pairs of black holes, each pair ending their death spiral dance over millions or billions of years in some of the most powerful explosions in the universe. In astronomy, we say with three objects of the same type you have a class. We have a population, and we can do analysis.”

Kalogera is director of Northwestern’s astrophysics center, CIERA (Center for Interdisciplinary Exploration and Research in Astrophysics) and the Erastus O. Haven Professor of Physics and Astronomy in the Weinberg College of Arts and Sciences.

“Northwestern is a unique research center of astrophysics,“ Kalogera said. “We excel at the theoretical astrophysics and high-performance computer simulations needed to make predictions for how massive stars form black holes and also how binary black holes merge into a single object. At present, Northwestern is the only place in the world that is home to researchers working on all possible formation paths of these binary black holes. We are at the forefront of this fast-moving area.”

For all three detections, Northwestern scientists have been involved in the core data science that allows the researchers to weigh the black holes, figure out how heavy they are and determine how fast the black holes are spinning around their own axes, before and after the mergers.

“Once again, the black holes are heavy,“ Larson said. “The first black holes LIGO detected were twice as heavy as we ever would have expected. Now we’ve all been churning our cranks trying to figure out all the interesting myriad ways we can imagine the universe making big and heavy black holes. And Northwestern is strong in this research area, so we are excited.”

The third detection is described in a new paper accepted for publication in the journal Physical Review Letters.

“With the third confirmed detection of gravitational waves from the collision of two black holes, LIGO is establishing itself as a powerful observatory for revealing the dark side of the universe,” said David Reitze of Caltech, executive director of the LIGO Laboratory and a Northwestern alumnus. “While LIGO is uniquely suited to observing these types of events, we hope to see other types of astrophysical events soon, such as the violent collision of two neutron stars.”

The latest finding solidifies the case for a new class of black hole pairs, or binary black holes, with masses that are larger than researchers believed possible before LIGO. The newfound black hole, formed by the pair’s merger, has a mass about 49 times that of our sun. This fills in a gap between the masses of the two merged black holes detected previously by LIGO, which had solar masses of 62 (first detection) and 21 (second detection).

“We have further confirmation of the existence of black holes that are heavier than 20 solar masses, objects we didn’t know existed before LIGO detected them,” said David Shoemaker of MIT, the newly elected spokesperson for the LSC. “It is remarkable that humans can put together a story and test it, for such strange and extreme events that took place billions of years ago and billions of light-years distant from us.”

The new detection, called GW170104, occurred during LIGO’s current observing run, which began Nov. 30, 2016, and will continue through the summer. LIGO’s observations are carried out by twin detectors, one in Hanford, Washington, and the other in Livingston, Louisiana.

LIGO made the first detection of gravitational waves in September 2015 during its first observing run since undergoing major upgrades in a program called Advanced LIGO. The second detection was made in December 2015. (The LIGO detectors were offline for nearly a year, from January to November 2016.)

In all three cases, each of the twin detectors of LIGO detected gravitational waves from the tremendously energetic mergers of black hole pairs -- collisions that produce more power during the instant before the black holes merge than is radiated as light by all the stars and galaxies in the universe at any given time.

There are two primary models to explain how binary pairs of black holes can be formed, and both models are being studied at Northwestern.

In one model, the black holes come together later in life within crowded stellar clusters. The black holes pair up after they sink to the center of a star cluster. In this scenario, the black holes can spin in any direction relative to their orbital motion. Fred Rasio, the Joseph Cummings Professor in Weinberg College’s department of physics and astronomy, leads the Northwestern research group studying this formation path, in collaboration with Kalogera.

The other model proposes that the black holes are born in the same binary system: they form when each star in a pair of stars explodes, and then, because the original stars were spinning in alignment, the black holes remain mostly aligned, even if not perfectly aligned. Kalogera leads the Northwestern research group studying this formation path.

GW170104 hints that at least one of the two black-hole spins might be misaligned with the binary orbit, mildly favoring the formation theory of dense stellar clusters. Northwestern research is at the forefront of these key scientific questions.

The LIGO Laboratory is funded by the National Science Foundation (NSF) and operated by Caltech and MIT, which conceived and built the observatory. The NSF led in financial support for the Advanced LIGO project, with funding organizations in Germany (MPG), the U.K. (STFC) and Australia (ARC) making significant commitments to the project.

More than 1,000 scientists and engineers from around the world participate in the effort through the LIGO Scientific Collaboration, which includes the GEO Collaboration. LIGO partners with the Virgo Collaboration, which is supported by Centre National de la Recherche Scientifique (CNRS), Istituto Nazionale di Fisica Nucleare (INFN) and Nikhef, as well as Virgo’s host institution, the European Gravitational Observatory, a consortium that includes 280 additional scientists throughout Europe. Additional partners are listed at: http://ligo.org/partners.php.