Limber Lungs: One Type of Airway Cell Can Regenerate Another Lung Cell Type

13-Apr-2015 10:05 AM EDT, by Perelman School of Medicine at the University of Pennsylvania contact patient services
favorite_border 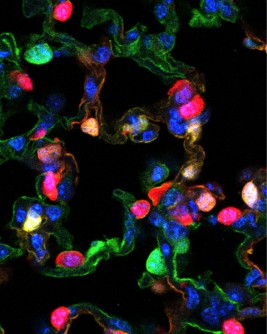 Newswise — PHILADELPHIA – A new collaborative study describes a way that lung tissue can regenerate after injury. The team found that lung tissue has more dexterity in repairing tissue than once thought. Researchers from the Perelman School of Medicine at the University of Pennsylvania and Duke University, including co-senior authors Jon Epstein, MD, chair of the department of Cell and Developmental Biology, and Brigid L.M Hogan, Duke Medicine, along with co-first authors Rajan Jain, MD, a cardiologist and instructor in the Department of Medicine and Christina E. Barkauskas, also from Duke, report their findings in Nature Communications.

“It’s as if the lung cells can regenerate from one another as needed to repair missing tissue, suggesting that there is much more flexibility in the system than we have previously appreciated,” says Epstein. “These aren’t classic stem cells that we see regenerating the lung. They are mature lung cells that awaken in response to injury. We want to learn how the lung regenerates so that we can stimulate the process in situations where it is insufficient, such as in patients with COPD [chronic obstructive pulmonary disease].”

The two types of airway cells in the alveoli, the gas-exchanging part of the lung, have very different functions, but can morph into each other under the right circumstances, the investigators found. Long, thin Type 1 cells are where gases (oxygen and carbon dioxide) are exchanged – the actual breath. Type 2 cells secrete surfactant, a soapy substance that helps keep airways open. In fact, premature babies need to be treated with surfactant to help them breathe.

The team showed in mouse models that these two types of cells originate from a common precursor stem cell in the embryo. Next, the team used other mouse models in which part of the lung was removed and single cell culture to study the plasticity of cell types during lung regrowth. The team showed that Type 1 cells can give rise to Type 2 cells, and vice-versa.

The Duke team had previously established that Type 2 cells produce surfactant and function as progenitors in adult mice, demonstrating differentiation into gas-exchanging Type 1 cells. The ability of Type I cells to give rise to alternate lineages had not been previously reported.

“We decided to test that hypothesis about Type 1 cells,” says Jain. “We found that Type 1 cells give rise to the Type 2 cells over about three weeks in various models of regeneration. We saw new cells growing back into these new areas of the lung. It’s as if the lung knows it has to grow back and can call into action some Type 1 cells to help in that process.”

This is one of the first studies to show that a specialized cell type that was thought to be at the end of its ability to differentiate can revert to an earlier state under the right conditions. In this case, it was not by using a special formula of transcription factors, but by inducing damage to tell the body to repair itself and that it needs new cells of a certain type to do that.

The team is also applying the approaches outlined in this paper to cells in the intestine and skin to study basic ideas of stem cell maintenance and differentiation to relate back to similar mechanisms in the heart. They also hope to apply this knowledge to such other lung conditions as acute respiratory distress syndrome and idiopathic pulmonary fibrosis, where the alveoli cannot get enough oxygen into the blood.

“We want to know if we can, and how, to make new lung cells as work-arounds for diseased alveoli cells,” says Jain.

Penn Medicine is one of the world's leading academic medical centers, dedicated to the related missions of medical education, biomedical research, and excellence in patient care. Penn Medicine consists of the Raymond and Ruth Perelman School of Medicine at the University of Pennsylvania (founded in 1765 as the nation's first medical school) and the University of Pennsylvania Health System, which together form a $4.9 billion enterprise.