Linda Brady, MD, Recognized by the Vasculitis Foundation (VF) with the 2018 V-RED Award 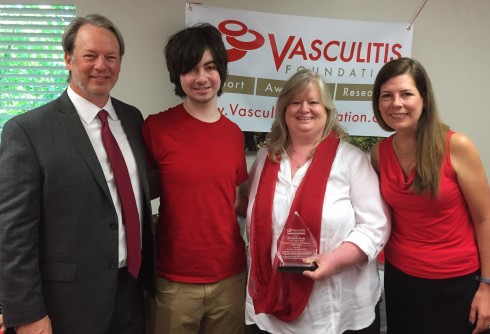 The V-RED Award is presented annually to a medical professional who made a quick diagnosis of vasculitis, thus enabling the patient to receive timely and appropriate treatment, potentially sparing the patient permanent and ongoing health complications.

Dr. Brady was nominated by Lisa Crabb, the mother of Chip, who was diagnosed with Granulomatosis with polyangiitis (GPA/formerly Wegener’s) in September 2017.  Chip began exhibiting what appeared to be a chronic cold in August 2017.  However, when he did not respond to treatment and began to have pulmonary issues, extreme fatigue, and hearing loss, Dr. Brady ordered more testing and brought in other specialists to evaluate Chip’s condition.

An ultrasound ultimately revealed autoimmune vasculitis which was immediately treated with high doses of prednisone and Rituxan. Today, Chip is in remission and has tapered off of the steroids.  Lisa credits the tenacity of Dr. Brady for making an early diagnosis that ultimately improved the outcome for her son.

Lisa nominated Dr. Brady for the special award because she believes it’s important to raise awareness about vasculitis, and especially improving the rate of early diagnosis that continues to be one of the major challenges for patients.

“By awarding Dr. Brady the V-RED Award, we will be shining a spotlight on those who see the disease at its earliest stages-the primary care clinical community,”  says Crabb. “It is here where we need to make doctors aware of what vasculitis symptoms look like and when to push forward with additional testing when their instincts tell them there is something seriously wrong. By educating and awarding doctors like her with this much-deserved accolade, earlier diagnosis and better long-term outcomes can be obtained by all those affected.”

In addition to Dr. Brady, there were 41 other medical professionals nominated for the 2018  award throughout the world. Three of them were selected for Honorable Mention, and all of the other nominees were given a certificate of appreciation by the VF.

Learn more about the V-RED Award on the VF’s website at www.VasculitisFoundation.org

According to the Cleveland Clinic, which has long been active in vasculitis research, the prevalence of specific types of vasculitis in the United States is about 3/100,000 population for granulomatosis with polyangiitis (GPA/formerly Wegener's), 3/100,000 for polyarteritis nodosa, 26/100,000 for giant cell arteritis, and 1/100,000 for Takayasu arteritis. For just this small sample of selected vasculitides, the combined prevalence is over 30/100,000 population. About 100,000 Americans per year are hospitalized for care of vasculitis, and while its impact is most significant among patients and their families, it also impacts society through its effect on the U.S. workforce and health care system.

The Vasculitis Foundation is the international advocacy organization for people with vasculitis. The VF empowers patients through disease education, raises awareness of vasculitis in the general public and medical community, and funds research to determine the cause, develop more effective treatments, and discover a cure.  The VF is committed to improving the lives of current and future patients and is positioned as the definitive resource for patients, family members, medical professionals and researchers seeking information about vasculitis. For information about vasculitis and the Vasculitis Foundation, please visit www.VasculitisFoundation.org.