Newswise — December traditionally marks a time for holiday concerts and this year at Virginia Tech, a new orchestra will be debuting a unique and original sound. Scoot over winds and brass, strings and chorale – it is time to make room for the laptop orchestra.

Ivica Ico Bukvic, founder and director of the group and a faculty member in the Department of Music, points out that Virginia Tech's laptop group is the first Linux-based orchestra in the world with focus on ultra-affordable design.

“To minimize cost in hope of encouraging widespread adoption as well as exploration of opportunities in K-12 education, we utilize an inexpensive MSI Wind netbook and employ Linux operating system that is freely available for download online,” said Bukvic. Thus far, only two other university laptop orchestras exist in the United States (Princeton and Stanford), and they feature Macbooks with pricey software and speakers that can run into thousands of dollars. Virginia Tech's cost per seat is estimated at $700. Named in honor of the open source software that assists in giving it this financial flexibility, Virginia Tech's laptop group is known as "L2Ork" (http://l2ork.music.vt.edu/).

L2Ork will have a showcase booth set up on Dec. 4, from noon to 1 p.m. outside the Commonwealth Ballroom in the Squires Student Center on the Virginia Tech Blacksburg campus. A more formal concert will be held that evening at 7 p.m. in the Studio Theatre. A discussion will follow that half-hour performance, which is free and open to the public.

Salad bowls for speakersIn keeping with the affordable design, Bukvic – in collaboration with Thomas L. Martin, associate professor in electric and computer engineering, and Eric Standley, assistant professor in the School of Visual Arts, and an army of undergraduate student researchers – fashioned homemade speakers out of wooden IKEA salad bowls. The hemispherical design, each with a half-dozen speakers, allows for omni-directional projection of a sound source. Painted black and soldered by the research project team over the summer, the speakers add a surreal look to this unique orchestra pit.

The technologyThink of the computer as the music stand. Players observe their “scores” on the screen and follow upcoming directional cues. Wiimotes and nunchuks (gadgets used with today’s action computer games) are the instruments. Orchestra members hold one of these in each hand and thereby control loudness, pitch, sound color and just about any other parameter as prescribed by the composer. Their collective gestures mimic that of a bow on a stringed instrument and range from smooth to feverish intensity as volume builds.

The entire orchestra is networked, meaning each L2Orkist is fully aware of what other members of the ensemble are currently doing. This allows the ensemble to quickly change its configuration, for example, from following a director to simultaneously sharing the role of a conductor. Likewise, actions of one ensemble member, in addition to producing sound can also affect the instrument properties (color, pitch, loudness) of another instrument in the ensemble, spawning potentially a complex web of interdependencies.

Members of this new symphony are students who self-identify as “music technologists” and “computer geeks” as well as theatre arts, political science, engineering, biology, and math majors. L2Ork’s debut will feature compositions by Bukvic as well as music technology major David Mudre. “Composing for larger groups like traditional orchestras is a major and time-consuming feat,” said Bukvic. “This is also true for the laptop orchestra, except that on top of compositional challenges, one also faces the design of an instrument using Pure-Data programming language and the mapping of its features onto various gestures reproducible through the use of a wiimote, and their cumulative assessment through aural (e.g. sound) and visual (e.g. choreography) impression.”

Outreach into K-12What makes this version of a laptop orchestra particularly appealing is that it can be affordably imitated in K-12 education, where it can serve as a bridge between STEM and Arts. In the spring of 2010, the Roanoke Jefferson Center Music Lab will be outfitted for a five-station orchestra and partner with Virginia Tech next semester. Fifth graders from the Girls’ and Boys’ Club will be the initial participants, a testament to L2Ork's educational outreach capacity.

L2Ork SponsorsL2Ork is a DISIS (Virginia Tech Music Department’s Digital Interactive Sound & Intermedia Studio) initiative that has been made possible through support from across the campus and beyond. It all started with sponsorship from Sweetwater Inc. and a grant from Earving L. Blythe vice-president for information technology at Virginia Tech. L2Ork then received funding from the Institute for Society, Culture, and Environment (ISCE), the College of Liberal Arts and Human Sciences (http://www.clahs.vt.edu/), and the Institute for Critical Technologies and Applied Science (ICTAS) with additional support from the Department of Music, the Center for Instructional Development and Educational Research (CIDER), the Collaborative for Creative Technologies in Arts and Design (CCTAD), the School of Education (http://www.soe.vt.edu), as well as corporate sponsorships through MSI Computer and Roland Corporation.

About BukvicBukvic is a “multimedia sculptor” who recently presented at a TEDx event where speakers give “the talk of their life in 18 minutes or less.” “TED” stands for Technology, Entertainment, Design — three broad subject areas that are, collectively, shaping the future. TEDx events — a new initiative of the TED organization — are independently organized by local teams in various places around the world. TED events have been called “The ultimate brain spa,” “Davos for optimists” and “A journey into the future, in the company of those creating it.” View Bukvic’s talk at http://tedxmidatlantic.com/live/#IvoBukvic. 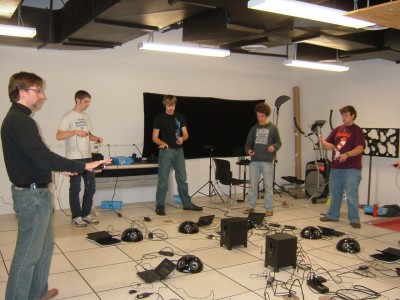 Caption: Ivica Ico Bukvic leads labtop orchestra members Christopher Cummins, David Mudre, Ian Philips, and Steven Querry in rehearsal. Wiimotes and nunchuks are the instruments. Orchestra members hold one of these in each hand and thereby control loudness, pitch, sound color and just about any other parameter as prescribed by the composer. View and hear the result on YouTube at http://www.youtube.com/watch?v=vFt4MgN7JPQ&feature=player_embedded 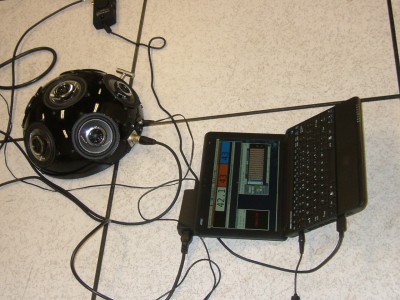 Caption: In keeping with the affordable design, faculty members from music, electric and computer engineering, and the School of Visual Arts, and an army of undergraduate student researchers fashioned homemade speakers out of wooden IKEA salad bowls.