World renowned soprano Renée Fleming will deliver this year’s commencement address at Northwestern University in June. Fleming, one of the most recognizable and celebrated voices on the planet, is a four-time Grammy Award winner, was the first classical artist to sing the National Anthem at a Super Bowl and has been presented the National Medal of Arts, the highest award given to artists by the U. The University of California San Diego today announced that Rep. John Lewis, often called “one of the most courageous persons the civil rights movement ever produced,” will offer the keynote address at the invitation-only UC San Diego All Campus Commencement June 16, 2018. 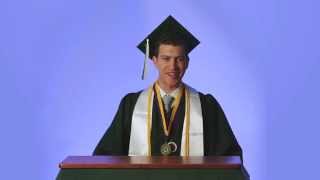 Don Greenberg was thrilled to be announced as one of this year’s student Commencement speakers for Binghamton University’s Thomas J. Watson School of Engineering and Applied Science. However, when he learned that his Commencement ceremony was on Shabbat, it appeared as if all hope was lost. Growing up as an Orthodox Jew, Shabbat had always been a time for Greenberg to spend with friends and family, while also resting. For many Jews, Shabbat is a time to disregard many of the typical demands of modernity, such as driving, using electronics, writing, cooking and other forms of “work.” Admiral Michelle Howard, Vice Chief of Naval Operations, will address graduates on May 30 at the 209th Commencement Ceremony of Rensselaer Polytechnic Institute. Six years ago at this time, Laura Ling was imprisoned in North Korea. Chosen as Carthage College’s 2015 Commencement speaker, she’ll share reflections from those terrifying months and other lessons she has gleaned from a career as an award-winning broadcast journalist. More than 500 students in the Class of 2015 will receive degrees during the ceremony, scheduled for 10 a.m. Sunday, June 14, Alex Smith, quarterback for the Kansas City Chiefs, U graduate and generous philanthropist is the U's 2014 commencement speaker. He will receive an honorary Doctorate of Humane Letters for his dedication and inspiration – on and off the field of play. New Orleans native and Pulitzer Prize winner Wynton Marsalis will receive an honorary doctorate of humane letters and deliver the keynote address to graduates at Tulane University’s Commencement 2014, which will be held at 9 a.m., May 17 in the Mercedes-Benz Superdome. Global Leader in Study of HIV/AIDS to Speak at Commencement

Dr. Deborah L. Birx, a renowned international expert in the field of HIV/AIDS, will be the featured speaker at Union's 220th Commencement, College officials announced today. Approximately 525 students in the Class of 2014 will receive degrees during the ceremony, scheduled for 10 a.m. Sunday, June 15, on Hull Plaza. Birx will receive an honorary doctorate of science degree. World-renowned chef José Andrés will address graduates of the George Washington University at its 2014 Commencement. The James Beard winner is known for his restaurants, his PBS television series, his food advocacy work and his GW class, “The World on a Plate: How Food Shapes Civilization.” Tony La Russa, who recently was elected to the Baseball Hall of Fame and is considered one of the best managers in baseball history, has been selected to give the 2014 Commencement address at Washington University in St. Louis. The university’s 153rd Commencement ceremony is 8:30 a.m. Friday, May 16, in Brookings Quadrangle on the Danforth Campus.

NYU President John Sexton and Board of Trustees Chairman Martin Lipton today announced the names of those to be honored at the University’s 182nd Commencement Exercises, which will be held Wednesday, May 21st, at Yankee Stadium. U.S. Secretary of the Navy Ray Mabus to Speak at U.Va. Final Exercises

Ray Mabus, the U.S. Secretary of the Navy, will deliver the commencement address at the University of Virginia’s 185th Final Exercises on May 18. The former governor of Mississippi and ambassador to Saudi Arabia will speak on the Lawn following the traditional academic procession. Emmy Award–winner Chris Regan, a 1989 graduate of Ithaca College, has been selected to deliver the main address at the college’s 2014 Commencement ceremony, scheduled for May 18.

Saint Joseph’s University will grant honorary degrees to Frannie and James J. Maguire ’58 and David Hollenbach, S.J. ’64, Ph.D., at the 2014 Commencement ceremonies, which are set for Saturday, May 17. Wes Moore is a best-selling author, Army combat veteran, social entrepreneur, and executive producer and host of a series with PBS on returning veterans called “Coming Back with Wes Moore".

Award-winning author and journalist Christopher Dickey will deliver the Commencement address at Hamilton College on Sunday, May 25, at 10:30 a.m., in the Margaret Bundy Scott Field House. Dickey will be awarded an honorary degree, along with Deborah Bial, founder and president of the Posse Foundation, and Thomas Schwarz, a 1966 Hamilton graduate and president of Purchase College. Greg Creed, chief executive officer for Taco Bell Corp., a subsidiary of Yum! Brands, Inc., will give the commencement address at UC Irvine’s Paul Merage School of Business graduation ceremony to be held June 16, 2014, in the Bren Events Center on the UC Irvine campus. A jam-packed crowd cheered more than 600 graduates as they received their diplomas Sunday, May 19 in Mount Holyoke College's 176th annual commencement in the Richard Glenn Gettell Amphitheater. His Holiness the 14th Dalai Lama, spiritual leader of Tibet, will deliver the keynote address to graduates at Tulane University’s 2013 Commencement.

Peter B. Lewis to Speak at CWRU's Commencement

Renowned business leader and philanthropist Peter B. Lewis has been named Case Western Reserve University commencement speaker. The Progressive Insurance Co. chair to give address and receive an honorary degree on 10th anniversary of the opening of the Weatherhead School of Management building with his name. Social justice advocate and leader Kavita N. Ramdas ’85 will give the 2013 commencement address and receive an honorary degree when Mount Holyoke College celebrates its 176th commencement on Sunday, May 19. For the last four years, students from all over the United States have been ‘learning to care for those in harm’s way’ at the Uniformed Services University of the Health Sciences (USU), the nation’s only federal health sciences university, operated by the Department of Defense. On Saturday, May 19, these more than 200 uniformed and civilian medical professionals and scientists will take the final step towards that goal as they receive advanced degrees at USU’s 33rd Commencement Exercise.

Garry Trudeau and Skidmore dance professor Mary DiSanto-Rose, a Class of 1975 graduate, will speak at St. Lawrence University's Commencement May 20. Sam Palmisano, chairman of the board of IBM and chair of IBM’s executive committee, will return this spring to his alma mater, the Johns Hopkins University, as the featured speaker at the university-wide commencement ceremony on Thursday, May 24. A former university trustee, Palmisano will also receive an honorary degree of doctor of humane letters during the ceremony, which is for graduates from all divisions and campuses. Best-selling writer Azar Nafisi, author of Reading Lolita in Tehran, will address Mount Holyoke College graduates during the College's 175th commencement on May 20.

Rush University will recognize 596 graduating students at its 39th commencement ceremony on Saturday, June 11, at 2 p.m. at the UIC Pavilion, 525 South Racine in Chicago.

Scott to give keynote address to graduating health professionals. Journalist Tom Brokaw will be the speaker for St. Lawrence University's Commencement ceremony May 22, 2011.

Noted AIDS researcher and immunologist Anthony S. Fauci will deliver the keynote address at the 2011 commencement ceremony for Albert Einstein College of Medicine of Yeshiva University. Dr. Fauci, director of the National Institute of Allergy and Infectious Diseases (NIAID) of the National Institutes of Health (NIH), will speak at Einstein’s graduation, which takes place Wednesday, June 1, 2011 at 3 p.m. at Lincoln Center’s Avery Fisher Hall.

Pulitzer Prize-winning journalist and best-selling author Anna Quindlen will address the Grinnell College Class of 2011 at the college’s 165th Exercises of Commencement, on Mon., May 23, at 10 a.m. on Central Campus.

DeMaurice Smith to Give University of Maryland Spring 2011 Commencement Address

The University of Maryland will welcome DeMaurice Smith, executive director of the National Football League Players Association (NFLPA), as the 2011 Spring Commencement speaker. The fourth leader in the union's 41-year history, Smith represents approximately 1,700 NFL players in the collective bargaining union, which is currently negotiating a billion-dollar collective bargaining agreement with league owners.

Best-selling author, reporter, New York Times columnist and three time Pulitzer Prize-winner Thomas Friedman will deliver the keynote address and receive an honorary doctorate from Tulane University at its 2011 Commencement, which will be held at 4 p.m., Thursday, May 12 in the New Orleans Ernest N. Morial Convention Center.

Michael R. Bloomberg, mayor of the City of New York, will address graduates of the George Washington University at its Commencement on the National Mall Sunday, May 15, 2011. Academy Award winning actress and activist Marlee Matlin will be the speaker at the 2010 commencement ceremony for Nova Southeastern University’s (NSU) Fischler School of Education and Human Services. The ceremony will take place at 11 a.m. on Saturday, June 12 in the BankAtlantic Center in Sunrise, Fla.

Ezekiel J. Emanuel, M.D., Ph.D., a leading health policy advisor in the Obama administration, will address graduates at the Johns Hopkins University School of Medicine’s 115th convocation on Thursday, May 27, 2010 at 2:30 p.m. at the Joseph Meyerhoff Symphony Hall in Baltimore.

Preparing to Care for Those in Harm’s Way, More than 200 Uniformed Medical Professionals Graduate

More than 200 individuals will achieve that goal on Saturday, May 15, 2010, when the Uniformed Services University of the Health Sciences, or USU, graduates the class of 2010. New York University School of Medicine will hold its 168th annual graduation ceremony on May 13, 2010, at 10 a.m. at Avery Fisher Hall at Lincoln Center in Manhattan. Maria Bartiromo, host of CNBC's “Closing Bell,” host and managing editor of the nationally syndicated “Wall Street Journal Report with Maria Bartiromo” an alumna and trustee of New York University will address the class of 2010 .

hancellor John Mauceri has announced that Peter Bogdanovich, director of such films as THE LAST PICTURE SHOW, WHAT’S UP, DOC?, PAPER MOON and MASK, and Angus MacLachlan, writer of such films as TATER TOMATER, JUNEBUG and STONE (due out May 7 and starring Edward Norton, Robert De Niro and Milla Jovovich), will speak at the University of North Carolina School of the Arts (UNCSA) commencement ceremonies for college and high school graduates, respectively, on Saturday, May 29.