Florida springs' health may be partly due to declines in native algae-eating snail, research finds.

29-Jul-2014 9:45 AM EDT, by University of Florida Institute of Food and Agricultural Sciences
favorite_border 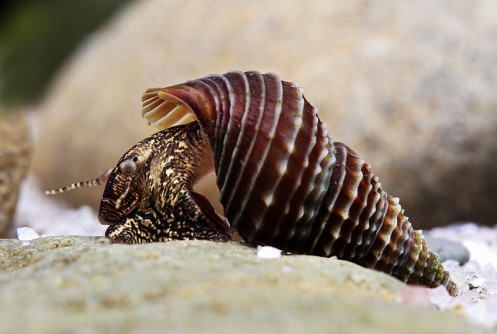 North Florida has the world’s highest concentration of large freshwater springs. For decades, crystal-clear water bubbling from the ground has driven tourism in the form of scuba divers, canoeists, boaters and swimmers, but today, many of those springs don’t bubble like they used to; green scum often obliterates the view.

Although the blame for algae-choked springs is often pinned on excess nitrate, the scientists say the absence of algae-eating native freshwater snails known as Elimia — which UF researcher Dina Liebowitz calls the “little janitor of the springs” — may be a key factor. Elimia may be a key to restoring the springs' health.

Nitrate, which has gotten the lion’s share of attention in springs-health discussions, enters the aquifer and emerges at the springs from municipal sewage treatment and disposal, agricultural and residential fertilizer use, livestock farms and residential septic systems.

Matthew Cohen, a UF associate professor and Institute of Food and Agricultural Sciences faculty member who specializes in ecohydrology, says while controlling nitrate is a worthy goal, doing that alone “will not be enough to restore springs ecology.”

In all, they took hundreds of samples from three parts of each spring, at different times of the year, she said.

Among the study’s strongest findings, outlined in a paper posted online this month by the journal Freshwater Biology, was a strong negative correlation between snails and algae, Liebowitz said: Where they found more snails, in general, there was less algae.

And their later experiments found that the snails could keep algae from accumulating in the springs.

That doesn’t mean that other factors aren’t part of the equation, she said, “but it suggests pretty strongly that snails are an important factor in keeping algae levels down.”

The researchers say, however, the ecosystem may resist restoration if the amount of algae present is more than they can graze back to low levels.

That means even if snail populations bounce back, mature algae would need to be cleared for snails to keep the young algae in check, she said.

While snail population declines have been well-documented in the southeastern United States, there are only a few older studies Liebowitz could use as a baseline, but her study found far fewer snails than were reported before.

Studies suggest pesticides and herbicides could be partly to blame for the snails’ decline, she said.

The researchers also examined whether oxygen levels at locations in and near springs had any correlation with snail population and found a connection. Water oxygen levels can drop during drought or when humans are pumping out the “new” water at the top of the aquifer, she said.