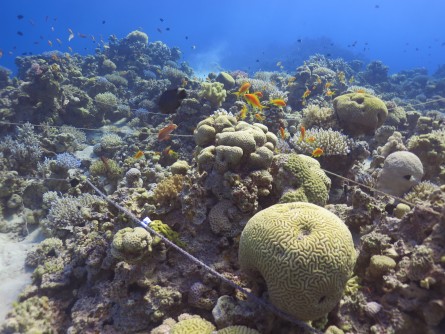 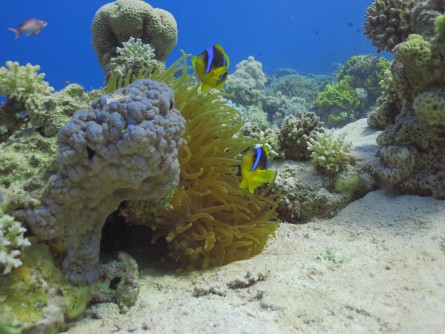 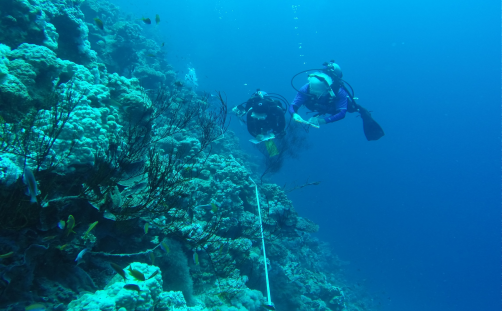 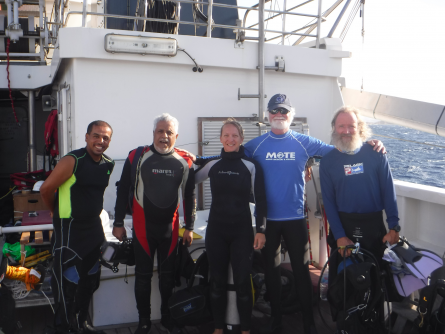 Newswise — U.S. and Saudi Arabian scientists launched the most extensive baseline survey to-date of coral reef ecosystems along the Saudi coast of the Gulf of Aqaba during late September 2016 — investigating multiple reef species in detail to support conservation. Now, the first preliminary results are available.

Mote Marine Laboratory in Sarasota, Florida, and King Abdulaziz University (KAU) in Jeddah, Saudi Arabia, partnered in the initial, two-week expedition focused on coral abundance, diversity and stress, along with the abundance and diversity of butterflyfish, sea urchins, seagrasses and other species that may indicate the health of this critical environment. Corals in the surveyed areas showed few visible signs of stress. Other preliminary results suggest that some reef-associated species may be healthier or more diverse in southern Gulf of Aqaba waters further from denser human populations. More data and analyses are needed to verify the possible significance of trends, and the researchers aim for another expedition in summer 2017.

The Gulf of Aqaba is bordered by Egypt on the west, Israel and Jordan in the north, and Saudi Arabia on the east. Though relatively small – about 111 miles long (180 kilometers) and 12 miles wide (20 km) – the Gulf is one of the northernmost living coral reef ecosystems and estimated to host approximately 210 species of hard corals and 120 species of soft corals. Coastal development and industry are denser in and around the northern-Gulf cities of Eilat, Israel, and Aqaba, Jordan, while the Saudi Arabian coast is far less populous and its waters are far less studied.

“I have had the good fortune to lead comprehensive, multi-year studies with colleagues in the northern Gulf since the mid-1990s, and the Gulf of Aqaba is known for its beautiful coral reefs. However, the Saudi Arabian portion of this significant body of water is largely unexplored — in particular, comprehensive studies of reef biodiversity and coral health down the length of this coast are lacking,” said Dr. Michael P. Crosby, President & CEO of Mote and leading U.S. partner in the expedition. “With this expedition, we’ve initiated the first in what we expect to be a continuous time series of multi-discipline data acquisition and analyses spanning from the northern border with Jordan south along the Saudi Arabian coast of the Gulf and into the Straits of Tiran. We’re excited to partner with the outstanding marine science faculty and students of King Abdulaziz University to gather these baseline data, which are necessary for understanding and addressing emerging challenges to their coral reefs.”

Reefs worldwide face growing challenges from climate change and ocean acidification due to excess carbon dioxide from human activity. Reefs in the Gulf of Aqaba may also be vulnerable to pollution from the developed northern Gulf coast, fishing, oil spills and tourism impacts.

The Kingdom of Saudi Arabia has committed to protecting its marine resources through several agreements and consortia. One is PERSGA, the Regional Organization for the Conservation of the Environment of the Red Sea and Gulf of Aden — an intergovernmental body dedicated to conserving marine and coastal environments of the Red Sea, Gulf of Aqaba, Gulf of Suez, Suez Canal and Gulf of Aden surrounding the Socotra Archipelago and nearby waters. Member states include: Djibouti, Egypt, Jordan, Saudi Arabia, Somalia, Sudan and Yemen.

“Scientific research has become an essential and effective contributor to understanding and addressing the various environmental impacts on the marine environment of the Gulf of Aqaba,” said Dr. Ali M. Al-Aidaroos, Professor at KAU and Saudi Arabian lead for the expedition. “International cooperation among scientists is aimed at understanding the risks and challenges of the Gulf environment in order to find innovative and sustainable management strategies. Mote Marine Laboratory is perfectly suited to help take on the challenges of the Gulf of Aqaba marine environment, which will benefit the Kingdom of Saudi Arabia and the world in general.”

September’s research expedition, funded by a grant from KAU, covered four Saudi Arabian sites from north to south: Haquel, Ras Dhabrah, Maknah and Ras Alsheikh Hamid. At each site, the researchers surveyed four transects at 5, 10 and 20 meters deep. Through observations, photos and samples, they worked to document coral abundance, diversity, health and microbial community; abundance, diversity and behavior of butterflyfish — indicator species for reef health; Diadema sea urchins and other reef-related organisms, including sediment-dwellers; and water chemistry, nutrients and plankton.

Some samples have yet to be processed. So far, preliminary results include:

Healthy corals:
Of the 6,751 coral colonies examined in Saudi Arabian waters of the Gulf of Aqaba, 6,652 appeared healthy. Only 1.5 percent showed signs of stress. Corals tended to be healthier in deeper waters and at sites further south.“We saw very few unhealthy corals,” said Dr. Erinn Muller, staff scientist at Mote. “When we did observe stress, it was usually due to predators or other natural causes of tissues loss, and some corals had signs of bleaching or harmful interactions with algae. We saw a few incidences of coral disease, but they were minimal.”Among the four study sites, the researchers collected 59 coral samples and extracted DNA to identify their resident bacteria – a first for Saudi Arabian corals in the Gulf of Aqaba. Some bacteria will be cultured to test whether they fight coral disease or even produce compounds useful for human medicine. Coral diversity and abundance:
“The Saudi coral reefs along the 180-kilometer Gulf of Aqaba are generally in good condition, with high living coral cover, often exceeding 60 percent at the best sites,” said participating KAU scientist Dr. Abdulmohsin Abdullah M. Al-Sofyani. “Of the three depths surveyed, the best reefs were at 5 meters and 20 meters deep, where coral cover averaged 40 percent and 60 percent, respectively.” Possible butterflyfish trend:
Butterflyfish species that feed on corals respond to subtle changes in coral communities, making them excellent indicators of reef health. In the September survey, researchers counted the number of butterflyfish species, the number of individuals per species, and key territorially and feeding behavior traits. “Preliminary analyses of our first bit of data indicates an increasing richness of butterflyfish species going from north to south, which correlates with dense human population centers in the north to less populous areas in the south,” said Crosby of Mote. “This trend appears statistically significant, but we need to increase our sample size through future surveys and examine trends over time.” Seagrasses:
Seagrasses were more common toward the southern end of the Gulf. The invasive seagrass Halophila stipulacea was found at the two southern sampling sites, Maknah and Ras Alsheikh Hamid, and the native species Thalassodendron ciliatum was found at Ras Alsheikh Hamid, the most southern site, near the confluence of the Gulf and the Red Sea. Invertebrate animals:
“In general, we saw few crustaceans and mollusks — though we did observe Tridacna giant clams,” said Mote Senior Scientist Jim Culter. “The sediment was dominated by tiny polychaete worms.” Culter sampled sediment patches, which KAU staff will analyze for grain size, organic and carbonate content.

Culter noted that very few macroalgae (conspicuously large) were visible on the reefs studied. However, Diadema sea urchins, which feed on algae and help prevent excess algal growth on reefs, did increase in abundance from south to north. Close examination of the reef surface and sediment showed sparse, closely cropped algae and the presence of microscopic cyanobacteria also known as blue-green algae. These results may be explained more clearly when water quality data are processed.“One possible explanation is that there are more nutrients in the upper Gulf near human population centers, which would support more algae for these urchins to eat,” said Dr. Dave Vaughan, Senior Scientist at Mote. Water quality:
The team collected water samples that will be analyzed for metals indicative of pollution, for pH, organic carbon, phosphorous and nitrogen compounds — all of which may affect the health of reef ecosystems. They also sampled for chlorophyll from marine algae and for tiny drifting organisms called plankton, which play important roles in the marine food web.

Mote CEO Crosby has championed marine science and conservation in the Red Sea and Gulf of Aqaba since the mid-1990s. He worked with international partners to lead the Red Sea Marine Peace Park Cooperative Research, Monitoring and Management Program — an effort to protect coral reefs that support thousands of species in the Gulf of Aqaba. In 2002, Crosby also organized a Middle East Regional Marine Science Symposium and Workshop on Butterflyfish that was held in Jordan with participating researchers from 16 countries.

Said Crosby: “For us at Mote, this is an opportunity to carry forward what Dr. Eugenie Clark started, which has been a major focus for me over the past 20 years — building international marine science partnerships with outstanding researchers in the Middle East to study these crucial ocean resources so they can be conserved and sustainably used for future generations.” 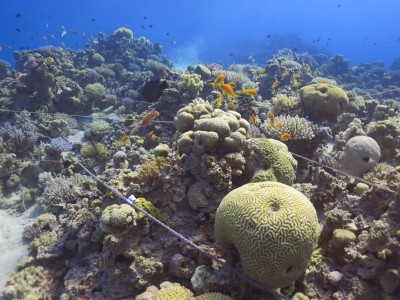 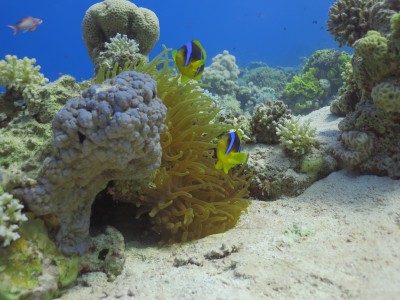 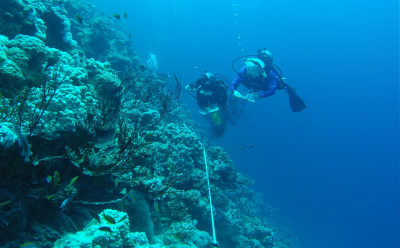 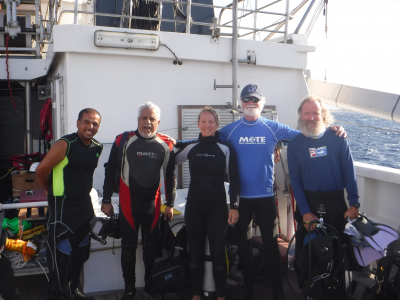