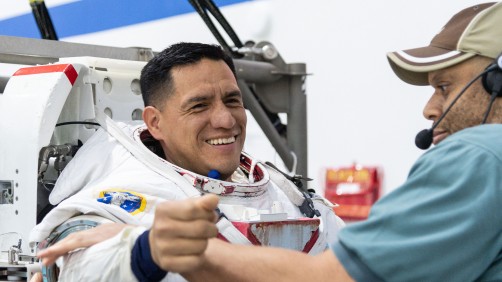 NASA Astronaut Frank Rubio gets help putting on a spacesuit at the Neutral Buoyancy Laboratory at NASA's Johnson Space Center in Houston to train for spacewalks.

The event will be broadcast live at 12:25 p.m. (EST) on NASA TV and NASA’s YouTube channel. The public can access the livestream via USU’s Facebook page at www.facebook.com/uniformedservicesuniversity or they can download the NASA TV app from a mobile device, or watch NASA TV on a computer: www.nasa.gov/nasatv. Check your TV guide for the NASA TV channel in your area.

During the NASA Downlink, Rubio and his colleague, Marine Corps Col. Nicole Mann, will answer pre-recorded questions from USU students and staff on the topics of space, science, health and the military. Students from the Washington Episcopal School STEM program and the Washington School for Girls, a STEM partner of USU, will also participate in the event. The downlink will give the USU community and students a firsthand look at what scientists, physicians, and educators do in space and inspire the next generation of students to pursue STEM careers.

Rubio, a 2010 graduate of USU’s Hebert School of Medicine, has been in space since Sept. 21 as a flight engineer for NASA’s Expedition 68, and is USU’s second alumnus to go to space in the past three years. He was also recently selected by NASA to be part of the first human-crewed mission back to the moon on Artemis 2 in 2024.

"We're greatly appreciative of Lt. Col. Rubio's and Col. Mann's contributions to science and humanity, and we're all excited to be a part of this event," said Dr. Jonathan Woodson, USU president.

According to NASA, Rubio is part of a scientific mission that will “demonstrate new technologies for future human and robotic exploration missions; including lunar missions through NASA’s Artemis program.”  He is also scheduled to conduct biofabrication experiments on behalf of USU’s Center for Biotechnology 4D BIO3 during his mission on the International Space Station. He will spend a total of six months in space.

About the Uniformed Services University of the Health Sciences: The Uniformed Services University of the Health Sciences, founded by an act of Congress in 1972, is the nation’s federal health sciences university and the academic heart of the Military Health System. USU students are primarily active-duty uniformed officers in the Army, Navy, Air Force and Public Health Service who receive specialized education in tropical and infectious diseases, TBI and PTSD, disaster response and humanitarian assistance, global health, and acute trauma care. USU also has graduate programs in oral biology, biomedical sciences and public health committed to excellence in research. The University's research program covers a wide range of areas important to both the military and public health. For more information about USU and its programs, visit www.usuhs.edu.