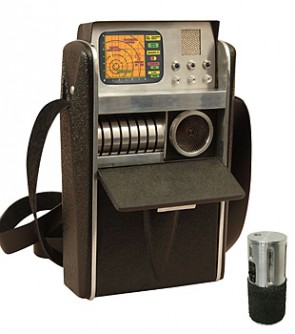 Newswise — Seeking to boldly go where medical science has not gone before, the Clinical and Translational Research Institute (CTRI) at the University of California, San Diego has been named the official testing site for the $10 million Qualcomm Tricorder XPRIZE, a global competition sponsored by the Qualcomm Foundation to develop a consumer-friendly, mobile device capable of diagnosing and interpreting 15 physiological conditions and capturing vital health metrics.

The XPRIZE competition is inspired by the tricorder medical device that debuted in the original 1966 Star Trek TV show and was frequently featured in subsequent series and movies.

“Of course, the tricorder in Star Trek was originally fantasy, a wonderful bit of science fiction,” said Gary S. Firestein, MD, CTRI director, dean and associate vice chancellor of translational medicine at UC San Diego. “But the idea – and this XPRIZE competition – symbolizes a very real vision of how we can shape a healthier future with creative use of cutting edge discoveries. It’s emblematic of our focus on ‘disruptive innovation’ to improve human health. We are looking forward to working with XPRIZE in the quest to seek out new technologies.”

CTRI will serve as the physical location of the test program, with doctors, technicians and staff providing logistical and personnel management. CTRI will be responsible for recruiting up to 480 volunteers to serve as consumer-testers, gaining their consent and instructing them in the use of the devices, overseeing device testing and conducting follow-up surveys.

Late last year, 10 teams were selected as finalists for the Qualcomm Tricorder XPRIZE. The teams come from the United States, Canada, India, Taiwan, Slovenia and the United Kingdom, representing both academic and private enterprises.

Beginning in early summer and for several months, these teams will have their entries evaluated at UC San Diego on specific measures of health assessment and consumer experience. For example, the devices must accurately diagnose a set of health conditions, such as diabetes, atrial fibrillation, stroke, tuberculosis, chronic obstructive pulmonary disease, pneumonia and hepatitis A. They must also capture real-time health metrics, such as blood pressure, respiratory rate and temperature.

“A tricorder could empower patients to capture reliable diagnostic data that will help them self-evaluate symptoms they are having and better prepare them for discussing their symptoms with their health care team,” said Gene “Rusty” Kallenberg, MD, professor and vice-chair, Department of Family Medicine and Public Health in the UC San Diego School of Medicine.

Final results will be announced in 2016 – the 50th anniversary of the original Star Trek series. First prize is $7 million, with $2 million for second place and $1million for third.

The CTRI testing site team will include physician-monitors, clinical coordinators, a database programmer and technical advisors. Kallenberg and a physician oversight team will direct preparatory tasks prior to testing, then medically monitor emergencies, field medical questions and handle issues requiring medical opinion or interventions during testing.

Coordinators trained in managing clinical trials will oversee the XPRIZE testing experiences of consumer-testers. The database programmer will program and produce reports to identify potential consumer-testers by location and/or department or by disease condition.

The team will also include staff from the Qualcomm Institute at UC San Diego to provide technical support. The Qualcomm Institute’s role will be to capture relevant data from the multiple participants in the test scenario (the tricorder, the consumer tester, the XPRIZE on-site technician and the on-site test monitoring tools), transfer that data to a central repository and perform review, analyses and scoring based upon captured metrics.

About Qualcomm Tricorder XPRIZEThe Qualcomm Tricorder XPRIZE is a 3.5-year global competition that will award $10 million to teams that develop a consumer-friendly device capable of diagnosing a set of 15 conditions and capturing metrics for health. The goal of the competition is to stimulate innovation and integration of precision diagnostic technologies, intended to make reliable health diagnoses available directly to consumers anytime, anywhere. Ultimately, this tool will measure an individual’s health state through a combination of sensors, imaging technologies, and portable, non-invasive laboratory replacements. To learn more, visit www.qualcommtricorderxprize.org.