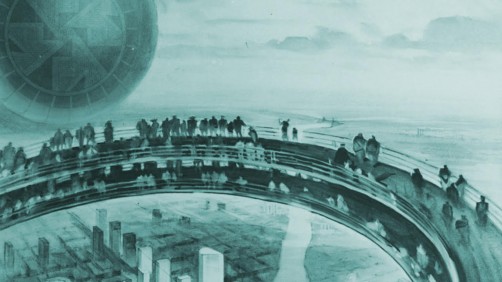 Artist’s rendering of the Perisphere interior for the 1939 New York World’s Fair.

Newswise — The Santa Fe Institute is launching a project to engage with the global challenge of becoming an InterPlanetary civilization.

The kick-off event in the InterPlanetary series is a panel discussion to be broadcast live on YouTube July 18, 2017 at 7:30 p.m. MDT.

Scientists, science fiction authors, explorers, and artists will meet for a conversation at the historic Lensic theater in downtown Santa Fe. Panelists will discuss issues around the core questions: What will it take to become an InterPlanetary civilization? How should we address the most pressing problems of Earth to tackle a challenge at this scale? What is holding humanity back, and what do we all need to achieve in terms of novel governance, new technologies, shared resources, and global cooperation to achieve this goal?

The event will feature images and ambient sounds by Thomas Ashcraft and Nate Metheny.

“One of the ambitions of this project is to unify," says David Krakauer, the panel discussion's moderator and President of the Santa Fe Institute. "A lot of scientific questions divide us, and we now as researchers need to reach out to a much broader base... posing an InterPlanetary challenge is one way to do that."

Click here for more information on the InterPlanetary Project.