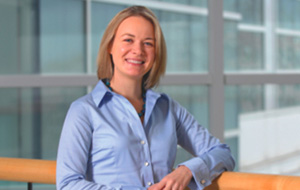 Newswise — CLEVELAND—Allison Webel, an associate professor at the Frances Payne Bolton School of Nursing at Case Western Reserve University, has for more than a decade focused on self-management interventions to improve the health and wellness of people living with HIV and related chronic conditions.

That focus has begun to turn more toward addressing health issues associated with aging among those living longer with the disease:

Overall, the work continues to demonstrate a growing sensitivity toward dealing with aging-related issues among that population. Webel had said in an article for The Conversation in 2017 that such a notion would have seemed preposterous only a generation earlier: “…life expectancy immediately following the identification of the virus in 1984 was often months after diagnosis.”

But today, many people with HIV are living as long as the general population, which makes the work by the Webel Research Lab increasingly relevant. Nearly half of the people living with HIV in the United States were age 50 or older in 2016, a figure that is expected to rise to 73% by 2030.

The ongoing PROSPER-HIV study, supported by the grant from the NIH’s National Institute of Nursing Research, is investigating how physical activity and diet impact symptoms of 850 adults living with HIV in Cleveland and three other locations. Participants wear sensors to collect physiological data and record what they eat. Researchers also know all the subjects’ medical details, thanks to a partnership with a nationwide network of HIV clinics.

Now, Webel’s team will expand the study to test various non-pharmacological strategies for reducing cognitive impairment: “As everyone is getting older, we know there are things we can do can promote our health, but this group tends to have higher rates of poor lifestyle behaviors, such as exercising less and eating fewer healthier foods,” said Webel. “We want to be able to tell people when they’re diagnosed how they can avoid some of the conditions.”

Among those conditions is inflammation, which adversely affects blood vessels to the brain and can increase symptoms of depression, she said.

Regarding depression among those living with HIV, Webel and four co-authors from Case Western Reserve and the College of Nursing at the University of Cincinnati published their most recent work in the Journal of Psychiatric Mental Health Nursing.

The research considers mental health benefits of social interactions for people living with HIV, who suffer from depression at a rate two- to three-times higher than the general population.

“This is a group of people who have long been isolated, stigmatized for lots of reasons-including HIV, and they don’t always have the larger sense of community that could help them,” she said, adding that while some engage with others who have HIV, they can have a hard time branching out into the community at-large.

But Webel said the new research confirms that people living with HIV benefit from even the smallest interaction like “joining a walking group in your neighborhood, working the polls for an election. Just being with people can make a big difference.”