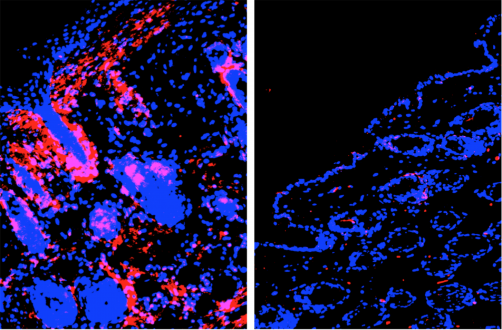 Periostin (shown in pink) is being used in the clinic as a marker for allergic diseases such as asthma as well as atopic dermatitis. Left image: Periostin is overexpressed in atopic dermatitis. Right image: Blocking LIGHT also blocks periostin expression.

Newswise — LA JOLLA, CA—Severe eczema, also known as atopic dermatitis, is a chronic inflammatory skin condition that is driven by an allergic reaction. In their latest study, researchers at La Jolla Institute reveal an important player that promotes skin inflammation in atopic dermatitis and the characteristic thickening of the skin.

Their work, published in the January 16, 2018, online edition of the Journal of Experimental Medicine, demonstrates that LIGHT, a member of the tumor necrosis factor (TNF) super family, directly controls the hyperproliferation of keratinocytes as well as the expression of periostin, a protein that contributes to the clinical features of atopic dermatitis as well as other inflammatory skin diseases such as scleroderma.

“Periostin is being used in the clinic as a marker for allergic diseases such as asthma as well as atopic dermatitis,” explains senior author Michael Croft, Ph.D., professor and head in the Division of Immune Regulation. “The fact that LIGHT acts upstream of periostin and is controlling its production really reinforces the idea that this is potentially a very good clinical target for treatment of atopic dermatitis and other inflammatory skin diseases.”

In fact, a therapeutic antibody that neutralizes the activity of LIGHT successfully suppressed disease symptoms after they first appeared, suggesting that therapies based on blocking LIGHT may add a valuable treatment option for patients suffering from severe eczema, an often debilitating disease.

LIGHT is a cytokine primarily produced by T cells and exerts its function through two receptors, HVEM and LTbR. In an earlier study, Rana Herro, Ph.D., an instructor in the Croft lab and lead author on both studies, had shown that LIGHT plays a key role in skin inflammation in scleroderma, an autoimmune disease that results in the overproduction of collagen leading to the thickening and scarring of tissue. But whether LIGHT signaling is also involved in other types of skin inflammation was unknown.

To find out whether LIGHT contributes to skin inflammation in atopic dermatitis, Herro used an experimental model for atopic dermatitis that replicates the human disease. Her experiments revealed that LIGHT-deficient mice only displayed minimal clinical symptoms compared to normal control mice. The same was true for animals that only lacked the LIGHT-receptor HVEM in keratinocytes, the predominant cell type in the outermost layer of the skin. “This is the important part of the study,” says Herro. ”Specifically deleting the receptor in keratinocytes was enough to abrogate disease.”

A closer look revealed that LIGHT stimulates the proliferation of keratinoyctes and thus the structural remodeling of the skin. It also showed that LIGHT strongly induces the expression of periostin. This protein is highly expressed in the skin of patients with atopic dermatitis and scleroderma, and animal studies have found it is essential for skin inflammation, although exactly how it functions is still being debated.

“We knew that LIGHT acts as a pro-inflammatory molecule on immune cells but we were able to implicate, for the first time in a disease setting, that this molecule acts on non-immune cells like the structural cells of the skin,” says Herro. “LIGHT directly drives fibrosis, a structural remodeling process that leads to the thickening and hardening of the skin.”

The researchers then went back and used an existing therapeutic antibody to block the interaction of LIGHT with its receptor, HVEM, after disease had already manifested. The antibody treatment suppressed inflammation and strongly reduced epidermal thickening. “That’s great news for patients suffering from eczema,” says Herro. “Our findings suggest that therapies that block LIGHT signaling might halt atopic dermatitis in humans and maybe even reverse disease symptoms.”

About La Jolla Institute for Allergy and Immunology The La Jolla Institute for Allergy and Immunology is dedicated to understanding the intricacies and power of the immune system so that we may apply that knowledge to promote human health and prevent a wide range of diseases. Since its founding in 1988 as an independent, nonprofit research organization, the Institute has made numerous advances leading toward its goal: life without disease.