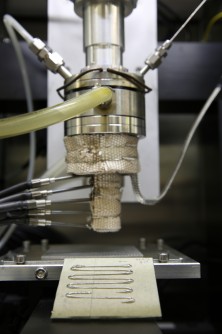 Unlike other metal 3D printing techniques that use lasers to fuse metal powder, the Direct Metal Writing approach incorporates an ingot that is heated until it reaches a semi-solid state before it’s forced through a nozzle. As it cools, the material hardens to form a 3D metal structure. 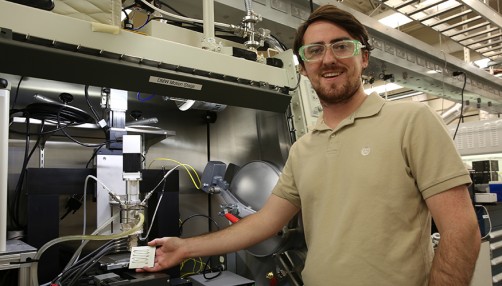 LLNL staff scientist Luke Thornley helped engineer the semisolid metal, a bismuth-tin mixture, that can be extruded through the nozzle of a specially-designed 3D printer

Newswise — Metal 3D printing has enormous potential to revolutionize modern manufacturing. However, the most popular metal printing processes, which use lasers to fuse together fine metal powder, have their limitations. Parts produced using Selective Laser Melting (SLM) and other powder-based metal techniques often end up with gaps or defects caused by a variety of factors.

To overcome those drawbacks, Lawrence Livermore National Laboratory researchers, along with collaborators at Worchester Polytechnic Institute, are taking a wholly new approach to metal 3D printing with a process they’re calling Direct Metal Writing, in which semisolid metal is directly extruded from a nozzle. The metal is engineered to be a shear thinning material, which means it acts like a solid when standing still, but flows like a liquid when a force is applied. The results of the ongoing three-year study were published in Applied Physics Letters in February.

“We’re in new territory,” said lead author Wen Chen, an LLNL materials scientist. “We’ve advanced a new metal additive manufacturing technique that people aren’t aware of yet. I think a lot of people will be interested in continuing this work and expanding it into other alloys.”

Instead of starting with metal powder, the Direct Metal Writing technique uses an ingot that is heated until it reaches a semi-solid state—solid metal particles are surrounded by a liquid metal resulting in a paste-like behavior— then it’s forced through a nozzle. The material is shear thinning because, when it’s at rest, the solid metal particles clump up and cause the structure to be solid. As soon at the material moves, or is in shear, the solid particles break up and the system acts like the liquid matrix. It hardens as it cools, so there’s less incorporated oxide and less residual stress in the part, the researchers explained.

While encouraged by their success in printing test pieces, the researchers cautioned the method is still in its early stages and will need more work to achieve higher resolution parts with more industry-friendly metals, such as aluminum and titanium. In the paper, the team produced parts using a bismuth-tin mixture, which has a low melting point of less than 300 degrees Celsius. The process took numerous iterations to get right, as researchers ran into the problem of dendrites—fingers of solid metal that would get stuck in the nozzle.

“The main issue was getting very tight control over the flow,” said LLNL engineer Andy Pascall. “You need precise control of the temperature. How you stir it, how fast you stir it, all makes a difference. If you can get the flow properties right, then you really have something. What we’ve done is really understand the way the material is flowing through the nozzle. Now we’ve gotten such good control that we can print self-supporting structures. That’s never been done before.”

The researchers said the latest study will provide accurate operating conditions for printing with metal directly from a nozzle. They’re already moving onto aluminum alloys, a metal that would be more attractive to industries such as aerospace and transportation, but will present challenges because of its higher melting point.

“Being able to print parts out of metal in this way is potentially important,” said staff scientist Luke Thornley, who worked on engineering the material. “So much of the work that goes into validation and analyzing for defects would be eliminated. We can use less material to make parts, meaning lighter parts, which would be big for aerospace.” 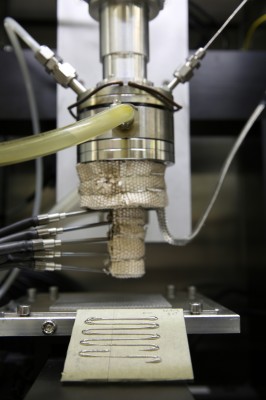 Caption: Unlike other metal 3D printing techniques that use lasers to fuse metal powder, the Direct Metal Writing approach incorporates an ingot that is heated until it reaches a semi-solid state before it’s forced through a nozzle. As it cools, the material hardens to form a 3D metal structure. 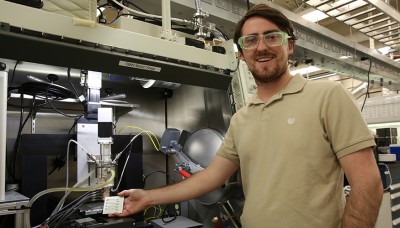 Caption: LLNL staff scientist Luke Thornley helped engineer the semisolid metal, a bismuth-tin mixture, that can be extruded through the nozzle of a specially-designed 3D printer