Local Entrepreneurs Get a Boost From University Center 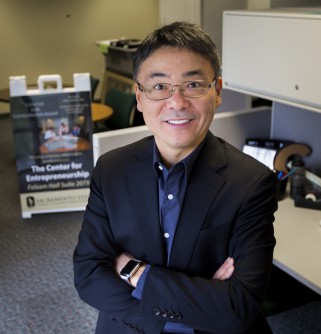 Part of the College of Business Administration (CBA), the center directed by Professor Seung Bach gives budding business owners a place from which to work, as well as professional help and student assistance.

It can be a tough world for business startups, with two-thirds of them disappearing in three to five years. “But the mortality rate of a newly formed company is significantly reduced if they receive professional assistance,” Bach says.

Unfortunately, most startups don’t have the resources or funding to afford such help. That’s where the center comes in.

Located in the University’s Folsom Hall, the center can accommodate a maximum of five entrepreneurs, giving them access to computers, communications, the Internet, and other standard office features. Because the CBA has a number of professional partners in the business world who are willing to share their experience and knowledge for free, the center also serves as a matchmaker between those people and the client.

And while many business incubators will claim a share of the intellectual property developed by the clients, that’s not the case with the Center for Entrepreneurship. “You develop it, you own it,” Bach says.

An entrepreneur gets to use the facilities for six months, with an option for six more.

Bach notes that 70 percent of the nation’s jobs and 50 percent of its gross domestic product are generated by small and medium-size companies. “As educators, we want to contribute to the community as the engine behind economic development,” Bach says. “If you help new ventures and increase their survival rate, that is a positive impact on the region’s economy.”

Of even more importance is the benefit of the center to CBA students who can find paid internships with the startups. While classes, homework, and textbooks are important, Bach observes that real-life experience is instrumental in the students’ education. “Business students need clinical experience,” he says. “They need to go out, get their hands dirty, and do something.”

In fact, getting students involved in the process is the center’s “No. 1 role,” Bach says, and their participation is mandatory for the entrepreneur. “If a student wants to work with you, you’re not going to say no,” Bach adds. “You have to let the student who wants to learn from you shadow you.”

Students involved with the center also benefit from the many forums, guest speakers, and workshops sponsored by the program.

The center has been open about five years, and most of the 15 fledgling enterprises that have passed through it are non-tech. With heavy tech hitters such as Intel and Hewlett-Packard Co. in the area, along with medical facilities, interest in and support for endeavors such as tech farms, green energy, medical equipment, and nano technology are already strong, according to Bach.

So, while the center does not exclude such entrepreneurs, it does try to accommodate startups in areas such as retail, design, workout centers, and online services.

Payam Fardanesh is one who took advantage of the center’s services when starting his Silk Road soda company. The sodas have organic ingredients such as pomegranate, are low in sugar, and are based on a Persian recipe from Fardanesh’s grandmother. They’ve quickly become a regional favorite and are finding new fans in the Bay Area and in the Southeast.

“The center gave us a home base to begin with,” says Fardanesh, who also is a graduate of the college’s MBA program.

He notes that they had access to the Internet, email, and other services that saved them about $8,000 to $10,000. “The money we would have spent on that, we were able to put into the product,” Fardanesh says.

They used the center for about 10 months beginning in January 2013. Without it, “we would have been meeting in my garage,” he says with a laugh.

During the Global Entrepreneurship Week observance, the center will hold its annual competition, “The Pitch.” Students submit new business concepts, of which about a dozen are selected. The students then get five minutes before a panel of business people to make their pitch. This is not a “business plan” contest in which the competitor needs to submit a 40- to 50-page proposal; instead, it involves more of an “elevator” pitch.

The top three receive seed capital ranging from $500 to $1,200 to help get their ideas moving.