An international team of researchers uses infrared spectroscopy techniques and a quantum theory model for a more complete understanding of methane dissociation reactions on platinum. 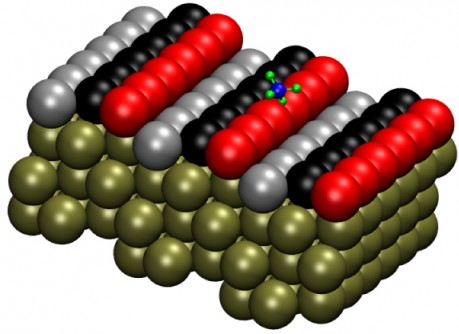 The Pt(211) surface has three-atom-wide terraces and one-atom-high steps. The researchers labeled the row of atoms on the step edge as “step” (red), the middle row as “terrace” (black) and the final row as “corner” (gray).

Newswise — WASHINGTON, D.C., January 2, 2018 -- Transition-metal catalysts, such as nickel and cobalt, are widely used in industry to produce hydrogen and other useful compounds from natural gas. Researchers achieve this transformation through steam reforming, which is the process of heating methane with steam in the presence of the catalyst, thus producing hydrogen and carbon monoxide.

Transition metals are known for their superior catalytic capabilities and researchers know that the most significant reactions occur at the surface of the catalysts. So far, the search for even better catalysts has been largely based on trial and error, and on the assumption that catalyzed reactions take place on step edges and other atomic defect sites of the metal crystals.

An international research team from Switzerland, the Netherlands, and the United States has combined experiments using advanced infrared techniques with quantum theory to explore methane dissociation reactions in minute detail. For the first time, their research shows exactly where the most significant reactions occur on the catalyst’s surface. The researchers focused on platinum (Pt) as the catalyst to break down methane, but the model can be applied to other transition-metal catalysts, such as nickel. They report their findings this week in The Journal of Chemical Physics, from AIP Publishing.

“A tested predictive theory with chemical accuracy could change the way one searches for new catalysts and make the search more efficient and cheaper,” said Rainer Beck, co-author of the paper and professor of chemical science and engineering at École Polytechnique Fédérale de Lausanne (EPFL).

At the atomic scale, the surface of a platinum catalyst (as well as other metal crystals) can consist of steps, terraces, and other defects that are seen as important “sites” in the catalytic process.

The research team used infrared laser pumping to excite the methane molecules into selected rotational and vibrational quantum states. The researchers then used reflection-absorption infrared spectroscopy (RAIRS) to detect methane dissociation on the various sites of the Pt(211) crystal. RAIRS is a nonintrusive technique that allows researchers to monitor chemical reactions in real time during the deposition of, in this case, methane on the Pt surface by recording site-specific uptake curves for chemisorbed methyl species on steps and terraces sites. Based on these measurements, researchers can then determine the reactivity levels of methane on each of the sites.

The researchers also employed the Reaction Path Hamiltonian model, a quantum theory framework, to calculate the potential energy surface and explore the dynamics during the chemical reactions. Their findings showed that dissociation reactions are at least two orders of magnitude more efficient on the steps than on the terraces. Moreover, no reaction took place on a third type of surface site located between steps and the terrace (referred to as “corner atoms”).

“We demonstrated that it is possible to use RAIRS detection for state- and surface-site specific measurements of methane reactivity and to compare the effect of vibrational excitation on reactivity on the steps and terraces of a catalyst surface,” Beck said. “This new area of study provides another level of detail in detecting methane’s dissociation products.”

The experiments were conducted at EPFL in Switzerland and the calculations were performed at the University of Massachusetts Amherst in the U.S.