Newswise — Picture two residential beach communities on the New Jersey shore: Bay Head and Mantoloking, which side-by-side in Ocean County on a narrow barrier island that separates the Atlantic Ocean and Barnegat Bay.

The difference was hidden under the sand.

A forgotten, 1,260-meter seawall buried beneath the beach helped Bay Head weather Sandy’s record storm surges and large waves over multiple high tides, according to a team of engineers and geoscientists led by Jennifer L. Irish, an associate professor of civil and environmental engineering in the College of Engineering at Virginia Tech and an authority on storm surge, tsunami inundation, and erosion.

The stone structure dates back to 1882. Its reappearance surprised many area residents, underscoring the difficulties transient communities have in planning for future threats at their shores, the researchers said.

"It’s amazing that a seawall built nearly 150 years ago, naturally hidden under beach sands, and forgotten, should have a major positive effect under the conditions in which it was originally designed to perform,” said H. Richard Lane, program director in the National Science Foundation’s (NSF) Division of Earth Sciences, which funded the research. “This finding should have major implications for planning, as sea level rises and storms increase in intensity in response to global warming.”

The discovery, now online in the journal Coastal Engineering and slated for the October print edition, illustrates the need for multi-levels of beach protection in oceanfront communities, the researchers said.

“Once we got there, we immediately saw the seawall,” Irish said. “The beach and dunes did their job to a certain point, then, the seawall took over, providing significant dampening of the waves. It was the difference between houses that were flooded in Bay Head and houses that were reduced to piles of rubble in Mantoloking.”

With recovery efforts under way and storms still circulating through the area, Irish and Robert Weiss, an assistant professor of geosciences in the College of Science at Virginia Tech, with Patrick Lynett, an associate professor of civil and environmental engineering at the University of Southern California, documented high water marks, damage, overwash, and breaches of the barrier island.

All oceanfront homes in the two boroughs were damaged, ranging from ground-floor flooding to complete destruction. As measured by water lines on the interior of homes, flooding was similar in both boroughs. The difference was the extent of the storm’s impact.

In Mantoloking, the entire dune almost vanished. Water washed over the barrier spit and opened three breaches of 165 meters, 59 meters, and 35 meters, where the land was swept away. In Bay Head, only the portion of the dune located seaward of the seawall was eroded and the section of dune behind the seawall received only minor local scouring.

Later, using Google Earth to evaluate aerial images taken two years before and immediately after Hurricane Sandy, the research team evaluated houses, labeling a structure with a different roofline as damaged, one that no longer sits on its foundation as destroyed, and the remaining houses as flooded.

Despite the immense magnitude and duration of the storm, a relatively small coastal obstacle reduced potential wave loads by a factor of two and was the difference between widespread destruction and minor structural impacts, the researchers said.

“We have a great deal of compassion for the people who have had to endure the devastation of Hurricane Sandy in Bay Head and Mantoloking,” Irish said. “It will have little solace, but we are left with a clear, unintentional example of the need for multiple levels of defense that include hard structures and beach nourishment to protect coastal communities.”

This research was supported by the National Science Foundation via grant EAR-1312813. 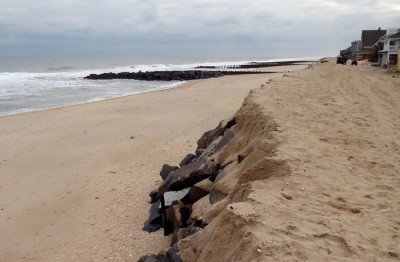 Caption: A relic seawall in Bay Head, N.J., dating back to 1882, was uncovered by Hurricane Sandy in October 2012. The forgotten structure staved off a significant amount of property damage. 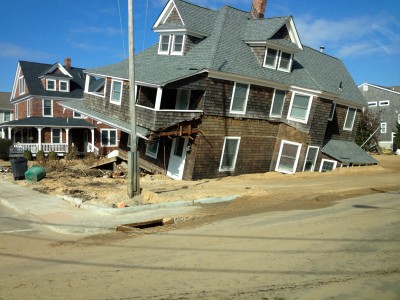 Caption: This oceanfront home in Mantoloking, N.J., was pushed from its foundation after Hurricane Sandy reached the mainland United States on Oct. 29, 2012.