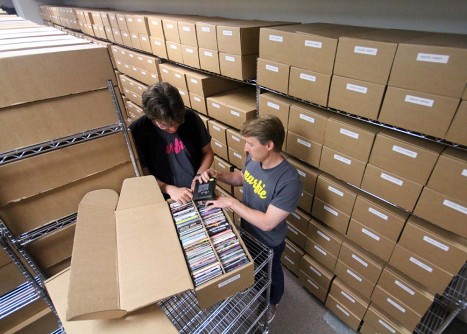 Co-founders Preston Austin (left) and Matt Younkle (right) in the Murfie Warehouse, Madison, Wisconsin. Murfie’s business is encoding music from customers’ CDs onto its hard drives, and then playing them through any device a customer owns.

Newswise — MADISON, Wis. — Is there a life for compact discs in the age of the cloud? No, and yes, is the answer from Murfie, a Madison business founded by two University of Wisconsin-Madison alumni that is now in its fourth year of operation. No: It’s a hassle to juggle discs. Yes: Ownership of the disc gives you the right to play its music through a cloud-connected device in your car, home, office or pocket.

Murfie’s business is encoding music from customers’ CDs onto its hard drives, and then playing them through any device a customer owns.

Co-founder Matt Younkle says the idea began spinning in his head as he was packing to return to Madison in 2009. As he pondered boxes holding hundreds of CDs, he thought, “This is really interesting. I don’t have a CD player, but I have hung on to them anyway. What is the meaning of that?”

The meaning, he decided, resided in his emotional attachment to his music collection. He pondered creating a full-fidelity archive, but could not find a service to do that. And so he was loathe to dump his music.

And yet by 2009, the growing appeal of streaming music from the network or the cloud, rather than a plastic disc, was already obvious.

So two years later, in 2011, Younkle and fellow UW-Madison alumnus Preston Austin started a business promising all the benefits of CDs with none of the irritations. “With subscription streaming services, you are essentially renting your music, your culture, so your journey starts and ends with nothing,” Younkle says. “With Murfie, the journey starts and ends with your media.”

Here, in essence, is Murfie’s deal: “You own your CDs, but we house them. If you want to sell a disc, we handle that for you. Even though you may not see your property from one year to the next, you can enjoy your music whenever.”

Murfie was not Younkle’s first startup based on observing unmet needs. While he was earning a bachelor’s degree in computer sciences and electrical engineering at UW-Madison in 1997, he’d been bugged by the sluggish pace of the beer line at Memorial Union. For reasons rooted in fluid dynamics, bubbles that form in a conventional tap slow the pour. Tapping expertise at the university, he created a high-speed nozzle for dispensing beer called TurboTap, which is now used at Memorial Union — and Wrigley Field in Chicago.

After selling Laminar Technologies Inc., the startup he had created to make TurboTap, Younkle went on the prowl for opportunity in 2007. Having focused on CDs, he teamed up with Austin, who was developing ideas about a “bookshelf in the cloud.”

To survive in a marketplace that includes Apple’s iTunes and Amazon, Murfie sells through companies that produce Wi-Fi-connected home audio systems. “You don’t hear about us unless you have one of these,” Younkle says, “but if you do, we are the only service that can answer the question, ‘What happens to my CDs and vinyl?’”

At offices on the Capitol Square in Madison, Murfie has nine full-time employees and as many part-timers, including an outsize proportion of music students from UW-Madison.

After the discs that customers send in are uploaded onto Murfie’s servers, unlimited standard-rate streaming is free. Younkle says Murfie earns fees for higher-quality lossless streaming, disc storage after one year, and sales between customers. “Pretty much everybody buys something, and some people have built collections of thousands of CDs,” he says.

Younkle, who was trained as a classical pianist, says his business builds on music’s emotional power. “Even if that box of CDs has been collecting dust in the closet for 10 years, there are so many memories and connections. Customers tell us when they ship us their collection, they tear up because of all the memories. There is emotional equity in your collection. We do our best to enable the customer to preserve some of that equity, without having it fill a box in the closet.”