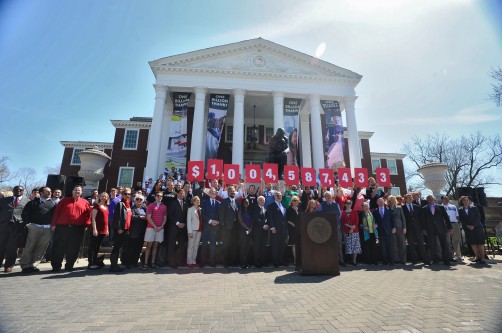 Newswise — LOUISVILLE, Ky. – The University of Louisville has met and exceeded its $1 billion capital campaign goal with three months remaining in the effort. The donations are funding student scholarships, faculty excellence, research and new facilities.

“This record-breaking campaign is impacting our students and our community in so many ways,” said UofL President James Ramsey. “We$8217;re thankful to our donors who believe in UofL and the way they’ve stepped up to keep us on our upward trajectory in academics, research and athletics.”

At a news conference and celebration today, Ramsey announced that more than 75,000 donors contributed to the Charting Our Course campaign which began in 2007. UofL achieved the $1 billion milestone faster than any other Kentucky college and is among just 52 public universities in the United States to undertake a $1 billion campaign, according to Keith Inman, vice president for university advancement.

UofL Board of Trustees Chair Robert Hughes praised the university’s efforts. “This has been an extraordinary campaign by faculty, staff and Dr. Ramsey’s team to keep moving UofL forward in difficult financial times,” Hughes said.

“I’m grateful to those who are making it possible for me to live my dream,” said Lashawn Ford, a UofL senior who received a Cardinal Covenant scholarship. “The scholarship money I received made it possible to focus on academics and fully participate in the college experience without worrying about my finances.”

While celebrating the milestone, Inman said, UofL will keep pushing the campaign fundraising effort until it closes June 30. “There are too many unmet needs of students, faculty, staff and the community to stop now,” Inman said.