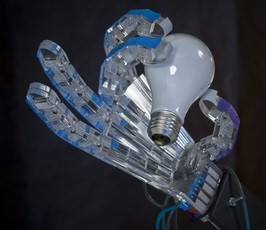 The fully articulated robotic hand RAPHaEL (Robotic Air Powered Hand with Elastic Ligaments) can firmly hold objects as heavy as a can of food or as delicate as a raw egg. It also is dexterous enough to gesture for sign language.

Newswise — The Robotics and Mechanisms Laboratory (RoMeLa) of the College of Engineering at Virginia Tech has developed a unique robotic hand that can firmly hold objects as heavy as a can of food or as delicate as a raw egg, while dexterous enough to gesture for sign language.

Named RAPHaEL (Robotic Air Powered Hand with Elastic Ligaments), the fully articulated robotic hand is powered by a compressor air tank at 60 psi and a novel accordion type tube actuator. Microcontroller commands operate the movement to coordinate the motion of the fingers.

"This air-powered design is what makes the hand unique, as it does not require the use of any motors or other actuators, the grasping force and compliance can be easily adjusted by simply changing the air pressure," said Dennis Hong, RoMeLa (http://www.me.vt.edu/romela/) director and the faculty adviser on the project. RoMeLa is part of Virginia Tech's department of mechanical engineering (ME).

The grip derives from the extent of pressure of the air. A low pressure is used for a lighter grip, while a higher pressure allows for a sturdier grip. The compliance of compressed air also aids in the grasping as the fingers can naturally follow the contour of the grasped object.

"There would be great market potential for this hand, such as for robotic prosthetics, due to the previously described benefits, as well as low cost, safety and simplicity," Hong said. The concept has won RoMeLa first place in the recent 2008-2009 Compressed Air and Gas Institute (http://www.cagi.org) (CAGI)'s Innovation Award Contest, with team members sharing $2,500 and the College of Engineering receiving a separate $8,000 monetary award.

The $10,500 prize was announced in April by the Cleveland, Ohio-based CAGI, an industry organization. The design competition was an invitation-only program, with projects overviews " including written reports and video " being sent to the judging panel. Teams from Virginia Tech, the Milwaukee School of Engineering and Buffalo State College each submitted entries on their air-powered designs for judging. Six teams in all participated, according to Hong.

It is the second year in a row that RoMeLa has won first place in the CAGI competition. A judge on the panel said of the robotic hand, "It is a cutting edge concept, and the engineering was no less than brilliant."

Student team members, all ME majors, are:

RAPHaEL is just part of a larger RoMeLa project: The humanoid robot known as CHARLI (Cognitive Humanoid Robot with Learning Intelligence). The hand already is on its second prototype design, with the newer model to be used by CHARLI. Once the newer model hand is connected to the larger body, it will be able to pick up " not just grasp and hold " objects as would a person.

Hong has said CHARLI is the first full-sized bipedal walking humanoid robot to be built entirely in the United States. The 5-foot tall robot will be used as a general humanoid research platform as well as for the RoboCup Humanoid Teen size league for RoboCup 2010.

The larger CHARLI project is partially sponsored by the Virginia Tech Student Engineering Council (https://www.sec.vt.edu/) and by the National Science Foundation (NSF). Hong said he hopes to have CHARLI one day walking about around campus and completing tours of Virginia Tech for visitors and potential students.

RoMeLa already has captured several prizes for its work, including the grand prize at the 2008 International Capstone Design Fair (http://www.vtnews.vt.edu/story.php?relyear=2008&itemno=808) for a trio of pole-climbing serpentine robots designed to take the place of construction workers tasked with dangerous jobs such as inspecting high-rises or underwater bridge piers.

Other award-winning student RoMeLa projects (http://www.vt.edu/spotlight/achievement/2008-06-30_romela/2008-06-30_romela.html) include TEAM DARwIn winning RoboCup 2007, an international autonomous robot soccer competition. The group was the first and only team from the United States ever to qualify for the RoboCup humanoid division.

The group also won third place at the 2007 DARPA Urban Challenge (http://www.vt.edu/spotlight/achievement/2007-10-29_victortango/2007-10-29-victortango.html), an autonomous vehicle race in the urban environment.

The College of Engineering (http://www.eng.vt.edu/) at Virginia Tech is internationally recognized for its excellence in 14 engineering disciplines and computer science. The college's 5,700 undergraduates benefit from an innovative curriculum that provides a "hands-on, minds-on" approach to engineering education, complementing classroom instruction with two unique design-and-build facilities and a strong Cooperative Education Program. With more than 50 research centers and numerous laboratories, the college offers its 1,800 graduate students opportunities in advanced fields of study such as biomedical engineering, state-of-the-art microelectronics, and nanotechnology. Virginia Tech, the most comprehensive university in Virginia, is dedicated to quality, innovation, and results to the commonwealth, the nation and the world.