31-May-2017 10:05 AM EDT, by Penn State Materials Research Institute
favorite_border 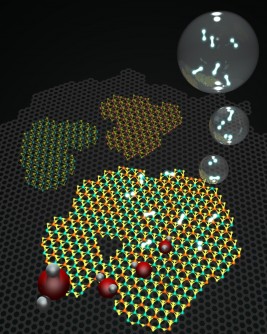 Molecular models representing a 2D heterostructure made of graphene (gray background hexagonal lattice), and islands on top of hexagonal WS2 and MoS, as well as an alloy of the two. Water (H2O) molecules in red (oxygen) and gray (hydrogen) come from the bottom left hand side and get transformed catalytically after interacting with the heterostructures into H2 bubbles (top right hand side)

Newswise — The “clean energy economy” always seems to be a few steps away but never quite here. Most energy for transportation, heating and cooling and manufacturing is still delivered using fossil fuel inputs. But with a few scientific breakthroughs, hydrogen, the most abundant element in the universe, could be the energy carrier of a future clean energy society. Taking one step closer toward the elusive goal, a team of scientists from Penn State and Florida State University have developed a lower cost and industrially scalable catalyst to produce pure hydrogen through a low-energy water-splitting process.

“Energy is the most important issue of our time, and for energy, fuels cells are crucially important. And then for fuel cells, hydrogen is most important,” says Yu Lei, a doctoral candidate at Penn State and first author of a new paper in ACS Nano describing the water-splitting catalyst she and her colleagues theoretically predicted and synthesized in the lab. “People have been searching for a good catalyst that can efficiently split water into hydrogen and oxygen. During this process, there will be no side products that are not environmentally friendly.”

The current industrial method of producing hydrogen – steam reforming of methane – results in the release of CO2 into the atmosphere. Other methods utilize waste heat, such as from advanced nuclear power plants, or concentrated solar power, both of which face technical challenges to becoming commercially feasible. Another industrial process uses platinum as the catalyst to drive the water-splitting process. Although platinum is a near-perfect catalyst, it is also expensive. A cheaper catalyst could make hydrogen a reasonable alternative to fossil fuels in transportation, and power fuel cells for energy storage applications.

“Molybdenum disulfide (MoS2) has been predicted as a possible replacement for platinum, because the Gibbs free energy for hydrogen absorption is close to zero,” says Mauricio Terrones, professor of physics, materials science and engineering and chemistry at Penn State. The lower the Gibbs free energy, the less external energy has to be applied to produce a chemical reaction.

However, experimentally, there are drawbacks to using MoS2 as a catalyst. In its stable phase, MoS2 is a semiconductor, which limits its ability to conduct electrons. To get around that problem, the team added reduced graphene oxide, a highly conducting form of carbon. Then, to further decrease the free energy, they alloyed the MoS2 with tungsten to create a thin film with alternating graphene and tungsten-molybdenum disulfide layers. The addition of tungsten lowers the electrical voltage required to split water by half, from 200 millivolts with pure MoS2, to 96 millivolts with the tungsten-molybdenum alloy.

The water splitting process uses a very small amount of electrical energy applied to an electrode immersed in water. Using this small potential, the protons in the solution can be absorbed onto the surface of the catalyst. Then two protons will migrate together to form a hydrogen bubble that rises to the surface and releases the hydrogen.

From the theoretical point of view, the electron orbitals play a crucial role. In the case of pure MoS2, the orbitals from the metal do not overlap well with the orbital of hydrogen in the key reaction step; however, when the alloy is present these orbitals interact well and makes the reaction more efficient. This is similar to what platinum does, and the reason why platinum is so energy efficient at this chemical reaction. However, in this work, researchers showed that cheaper and more abundant elements can be used and reach an efficiency that outperforms all the best catalysts.

“What happens in these alloys is an exquisite overlap of orbitals which makes the reaction more efficient. This is not observed in the pure components. It is an example where the hybrid is better than the pure components,” says Jose L. Mendoza-Cortes, professor of chemical engineering, materials science and engineering and scientific computing at Florida State.

Hydrogen fuel cells can boost a clean energy economy not only in the transportation sector, where fast fueling and vehicle range outpace battery powered vehicles, but also to store electrical energy produced by solar and wind. This work is another step forward to reaching that goal.

This work was supported by the U.S. Army Research Office, the National Science Foundation, and national funding agencies in China.

Mauricio Terrones is the director of the Center for Two-Dimensional and Layered Materials in Penn State’s Materials Research Institute. Check out a short new video about MRI here.