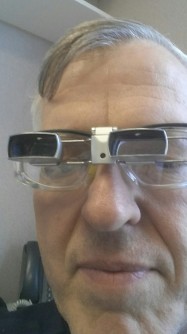 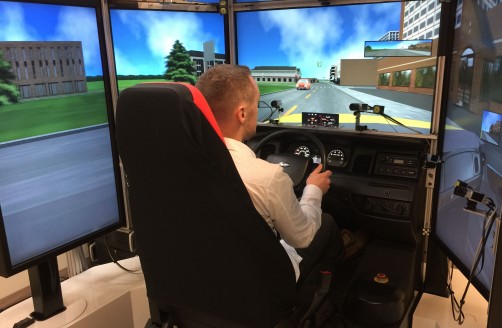 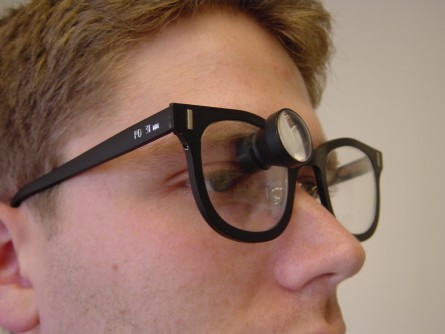 Newswise — Tim Goetz drives about 200,000 miles each year. Remarkably, Goetz is legally blind. Research funded by the National Eye Institute (NEI) is helping Goetz and others like him get or stay behind the wheel while keeping roads safe for everyone.

Goetz has 20/200 vision due to ocular albinism and drives using miniature telescopes mounted on regular glasses. Ocutech bioptic telescopes, as their called, were developed with NEI funding by optometrist Henry Greene from Durham, North Carolina. Prior to obtaining his Ocutech glasses, Goetz got around on foot or bicycle. With the telescopes, he obtained a restricted driver’s license and now works as an engineer for a large agricultural company, making site visits across the country. Goetz can drive safely in most places—even in urban areas during rush hour.

Ensuring that people with visual impairment can safely operate a motor vehicle is no simple matter. If fact, states’ vision standards for drivers vary. NEI is funding the development of strategies and devices to help visually impaired drivers meet driving standards, along with research to help states better assess driving performance.

Studies of on-the-road driving performance have helped researchers examine the relationship between common eye conditions and collision risk. NEI-funded scientist Cynthia Owsley, Ph.D., University of Alabama at Birmingham, conducted a battery of vision tests on 2000 drivers, ages 70 and older, and tallied the group’s collisions over the next three years.

Owsley discovered that loss of visual field, including peripheral (side) vision, was associated with more car crashes[i]. “It looks like the lower left part of the visual field is most important, at least for drivers in the U.S. where the oncoming traffic is to the left,” explained Owsley. A major cause of visual field loss is glaucoma—a condition that damages the optic nerve, which carries signals from the eye to the brain.

Slowed visual processing speed—a measure of how long it takes to identify objects—affects about a third of older adults and also is associated with more car crashes, Owsley said. Causes may include eye disease, neurological conditions, stroke, cognitive impairment, side effects of medication, and other circumstances that often accompany aging.

Cataracts—clouding of the eye’s lens—also affect driving. In a study of older drivers with cataract, those who underwent surgery to remove their cataracts had a 50-percent lower risk of collision, according to Owsley’s research. “There was a protective benefit to having had cataract surgery,” Owsley said.

To conduct naturalistic driving studies, researchers install cameras in study participants’ cars and sensors that record vehicle kinematics (e.g., acceleration and speed), providing data on near crashes, excessive speed, sudden stops, and so on. Owsley is conducting a naturalistic driving study involving about 200 older drivers (70 years or older) with a wide range of visual capabilities[ii]. The participants undergo vision screening tests and then their driving is video-monitored for six months.

Anjali Bhorade, M.D., of Washington University in St. Louis, is leading a naturalistic driving study of people with glaucoma. Results from a pilot project suggest that about 50 percent of drivers with glaucoma are able to drive safely[iii]. “Our goal is to identify compensatory strategies to help develop a training program to increase driving safety,” Bhorade said.

Driving simulation studies enable researchers to safely study potentially dangerous driving situations by taking them off the road. To study how drivers respond to road hazards, a research team led by Eli Peli, O.D., at the Schepens Eye Research Institute at Harvard Medical School, devised a pedestrian detection task using a driving simulator. In the simulation, virtual pedestrians run or walk in front of the vehicle. The researchers then measure how long drivers take to react[iv].

Alex Bowers, Ph.D., also of Schepens Eye Research Institute, is studying how people with hemianopia—loss of half of the visual field—detect and respond to potential road hazards[v]. “There is an underlying assumption that if someone has visual field loss they will automatically learn to compensate for that by moving their head and eyes,” said Bowers.

But that’s not what she found in the driving simulator. “When we tested 12 drivers with similar hemianopias, some scanned the environment very well and detected as many pedestrians on the blind side as the seeing side. Others hardly scanned at all.” Bowers’ findings suggest that drivers with hemianopia should be allowed to demonstrate their fitness to drive.

When Robert Sullivan had a stroke six years ago he lost the top left part of his field of vision. His neurologist said that he would never drive or ride a bike again, but Sullivan was extremely motivated to maintain his independence. And so, he made up his own rehabilitation program, teaching himself to scan his environment. “I had to work it out over time and get the confidence to get back in the car,” he said. But rehabilitation guidelines or protocols would have been helpful. Many people with low vision give up driving because they aren’t sure how to proceed alone, he said. A few rehabilitation clinics teach scanning strategies, but studies have yet to test whether they improve driver safety or performance.

Computer-based cognitive training software can help drivers improve visual processing speed and regain confidence behind the wheel. The most rigorously evaluated program is speed of processing training, a technique that uses repeated practice to train the visual/neural system to capture visual stimuli at increasingly brief durations of exposure (ranging from 16 to 500 milliseconds, akin to what we think of as a single glance), explained Virginia Wadley Bradley, Ph.D., also of the University of Alabama. The technique was successfully used as part of the Advanced Cognitive Training for Independent and Vital Elderly (ACTIVE) Trial[vi]. Currently, the commercially available BrainHQ cognitive training system contains a speed of processing module. With funding from the National Institute on Aging, Bradley is conducting a clinical trial of the module in people with mild cognitive impairment[vii]. The trial will measure on-road driving performance.

“There is some evidence in the literature that speed of processing training reduces the collision rate,” Owsley said. “However, many more studies are needed before I could definitively say that it could make you a safer driver.”

Until better standards and regulations are established, one way to increase safety of visually disabled drivers is the use of driving assessment clinics, Owsley suggested. These clinics employ certified driving rehabilitation specialists, who are often trained occupational therapists.

Peripheral prism glasses (Peli prisms), developed by Peli with NEI funding, help people with hemianopia compensate for blind spots. Prisms are placed on eyeglasses above and below the usual line of sight and shift peripheral light from the blind side to the seeing side. “They work like an early warning system,” Bowers said. Bowers tested use of the prism glasses in a driving simulator and found they helped some drivers better detect hazards[viii].

Bioptic telescopes like Goetz’s magnify distant objects. Typically, a telescope is mounted on just one lens. Users briefly glance through the telescopes to make out road signs and other fine details. Using a driving simulator, Bowers, in collaboration with engineer Gang Luo, Ph.D., also of Schepens, found that use of a bioptic telescope reduces the ability to detect driving hazards when the alternate eye was closed, underscoring the importance of maintaining good field of vision while driving.

Luo has developed an in-car surveillance system and data analysis software to conduct naturalistic driving studies of bioptic drivers[ix],[x]. “The results will give us insight into how people use telescopes in their everyday driving, what they use them for, and generally how well they drive,” said Bowers.

Vision standards for driving were established when there was little evidence to support them, and regulations still vary from state to state. “The current driving regulations are not good, but we lack sufficient evidence to say what they should be,” Bowers explained. With help from NEI, future screening tests will more accurately and reliably identify safe drivers. 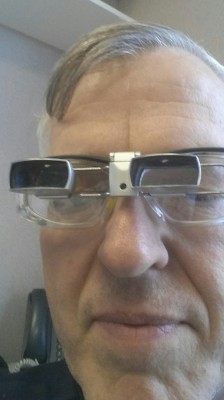 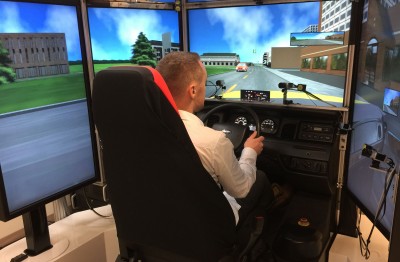 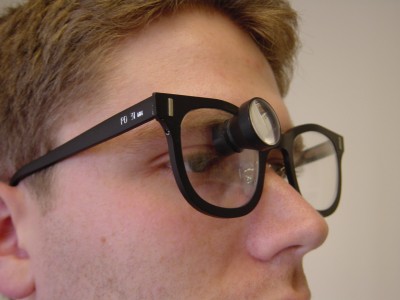