Stritch Medal Given for Outstanding Research, Education and Patient Care 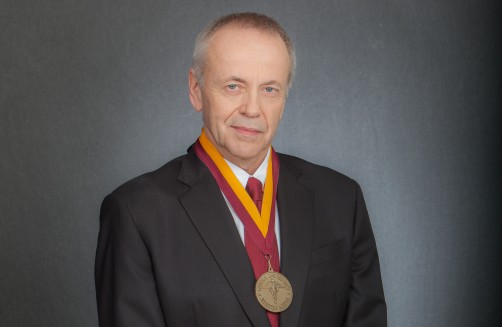 The Stritch Medal recognizes outstanding accomplishments of a Loyola graduate or faculty member who exhibits dedication to research, education and patient care.

"Whenever you discuss electrophysiology anywhere in the world, his name comes up," said Mamdouh Bakhos, MD, chair of Loyola's department of thoracic and cardiovascular surgery. "His academic accomplishments are the dream and inspiration of every young physician."

Dr. Wilber has helped to educate and train hundreds of medical students, residents and fellows, and has treated thousands of patients with atrial fibrillation, tachycardia, bradycardia and other heart rhythm disorders.

"I have found great personal satisfaction during my career from identifying patients whose quality of life I could improve," Dr. Wilber said.

Dr. Wilber was named director of Loyola's division of cardiology in 2001. Under his leadership, Loyola's cardiology program was nationally ranked by U.S. News and World Report 13 times.

Dr. Wilber stepped down as director of cardiology in 2017. He remains medical director of clinical electrophysiology.

More than 500 people attended the Stritch awards dinner – Chicago's longest-running black tie gala – which celebrated a theme of "Living a Life in Service to Others" and raised hundreds of thousands of dollars for medical student scholarships.

During the dinner, Loyola University Chicago bestowed its highest honor, the Sword of Loyola, to Cardinal Blase J. Cupich, archbishop of Chicago.