Student recognized for contributions in academics and social justice 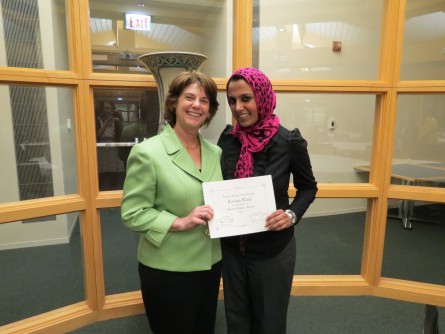 MaryMargaret Sharp-Pucci, EdD, MPH, director of the Health Systems Management Program, and Fatima Elahi at the Gannon Center for Women and Leadership Awards.

Newswise — Loyola University Chicago recently honored Fatima Elahi with the Gannon Center for Women and Leadership Award. Elahi is an undergraduate student in Loyola’s Marcella Niehoff School of Nursing Health Systems Management Program. She was recognized for her contributions in academics and social justice.

Elahi was honored at the Gannon Center for Women & Leadership Awards Dinner in March. The Gannon Center educates and fosters women leaders to contribute to the development of a more just social order.

“Fatima truly exemplifies the mission of the Gannon Center, as she has not only maintained an excellent academic record, but she has further devoted her time to the community to forge a more just society,” said Janet Sisler, director, Gannon Center for Women and Leadership.

Elahi’s contributions include co-founding the Loyola Chapter for PACE (Planning to Achieve Collegiate Excellence) where she established an after-school tutoring and mentoring program for grades K-8 with the Chicago Park District. As a freshman, she served as a representative and outreach chair for Loyola’s Muslim Student Association. Through this role, she coordinated interfaith initiatives, facilitated student dialogue and organized local service projects and campus-wide events. Elahi also volunteers in the Muslim Education Center as an eighth-grade teacher for Sunday school students.

As youth coordinator for Sisters’ Steppin’ Up, Elahi organizes community and social activities to provide a safe space for girls and teens ages 8 – 19. In addition, she designed a research project to improve patient care, safety and professional development at Loyola University Health System, and she served as a triage volunteer at a local doctor’s office, translating for and assisting patients who are native Spanish and Urdu speakers. Elahi also volunteers as an aide for senior services and interns at a women’s shelter for victims of domestic violence.

“As a woman of culture, color and diversity, I have learned to lead despite being disregarded due to my background,” Elahi said. “It is these very challenges that allow me to serve as an advocate for young women dealing with spirituality and identity issues in hopes that they will lead the next generation.”