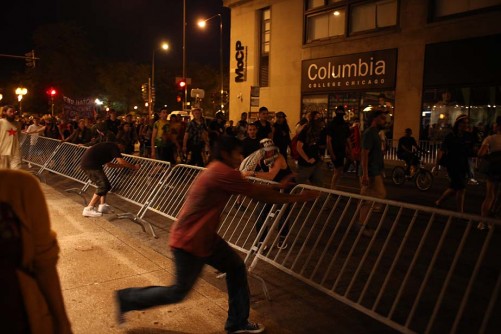 Newswise — “News reports of NATO include use of a chemical substance by protesters on a Chicago police officer as well as an unknown liquid found in the possession of an arrested protester are what we are hearing about NATO,” said Christina Hantsch, MD, toxicologist at Loyola University Health System. Hantsch, former medical director of the Illinois Poison Center, says, “The emergency medicine team at Loyola is prepared to provide medical care for any first responder or protester with any chemical exposure even if the specific agent is not identified.”

Loyola conducted two NATO preparation drills in the past 10 days, and maintained decontamination tents in readiness. Initial reports of injury have been limited. “Loyola is pleased that the law enforcement officers have been able to maintain control and there have not been large numbers of people requiring medical care at hospitals,” Hantsch says. “Loyola has been, and remains, ready to handle those with issues related to trauma, heat exposure, dehydration, infectious agent exposure, chemical agent exposure and other medical emergencies.”

Hantsch and the Loyola medical team are prepared to extend their cautionary medical watch beyond the official NATO Summit timeline. “Protestors have stated on the news that they are not leaving and pledge to continue to march,” said Dr. Mark Cichon, Director of the Loyola Emergency Department. “Loyola will continue to be prepared to care for potential injuries well after the Summit ends Monday night as our emergency management care team maintains ongoing preparedness activity.”

Loyola University Health System, the only Level 1 trauma center in Illinois verified by the American College of Surgeons, is prepared for the upcoming NATO summit.

Chicago endured extreme heat as temperatures reached 90 degrees on Sunday, May 20. On Monday, the last day of the NATO summit, a cold front lowered temperatures and also kicked up strong gusts. "You don't spit, or spray, into the wind," noted Hantsch, about the potential for use of chemicals. Loyola's emergency medical services experts include: